The Dallas Police Association not only provides for legal representation for its members, but it's an advocate for policy change. Protesters are hoping that they can call on the association to help make the change they want happen.

The Dallas Police Association not only provides for legal representation for its members, but it's an advocate for policy change.

Protesters are hoping that they can call on the association to help make the change they want to happen.

A few blocks away from Dallas police headquarters, a group of 20-30 protesters gathered outside a much smaller, police building.

It was in the hopes their voices would be heard.

“We need to make sure that the level of protection they receive is broken up, because right now, it's too strong, it's too powerful,” protest organizer Shenita Cleveland said. “They have plenty of time to get their story together and we don't have that same option.”

Almost as soon as the protest got underway, Dallas Police Association President Mike Mata crossed the street to talk.

Giving, at time, frank admissions about the department's shortcomings.

“So I’m arresting somebody, and someone gets on the radio and says, ‘Hey, I’m so and so, add me to that call.’ Well, I’ll try to hurry about and get done with that call because I know when that person shows up, maybe he's not going to abuse anybody, but he or she is just a jerk,” Mata explained. “I have failed you because I did not grab that person and pull him to the side and say, ‘Man, that ain't going to fly anymore.’” 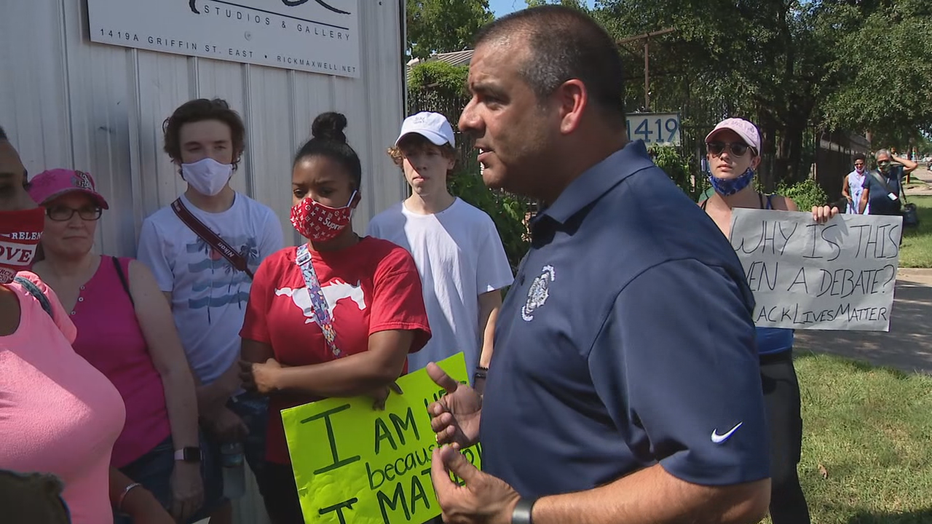 Police association's and unions have come under fire, especially so in Minneapolis, where the influential union leader has referred to George Floyd as a "violent criminal," and called protests a "terrorist movement.”

Mata, who was quick to condemn the officers in Floyd's death, said it is important police association's exist.

“I get attacked for representing officers’ rights, but the problem is just because you wear a badge and a uniform you don't forgo your constitutional rights,” Mata said. “We should be afforded the same rights as any other citizen and that's all I've ever said.”

So while protesters welcomed the conversation with Mata, and even joined him in prayer, they said there needs to be more than just talk.

The group at DPA ultimately went to city hall and met up with a larger group of about 400 protesters.

They made their way, peacefully, around the city, and then, as the curfew was about the kick in, there was a special moment as the crowd started to head out.

A woman knelt down, and then three officers joined her.

She voiced her concerns and fears.

There have been officers doing that across the country.

And some in the crowd demanded the officers do more than just kneeling, but it was a moment of unity.