The new Dallas police chief is preparing to take the helm, and will take on high violent crime numbers and community tensions.

DALLAS - The new Dallas police chief is preparing to take the helm, and will take on high violent crime numbers and community tensions.

On Monday, he addressed the media virtually.

The incoming police chief said he will use tried and true methods to reduce violent crime through hot spot policing, while taking care to make sure communities with high crime rates don't feel over policed.

Garcia added that the difference between saturation policing and hot spot policing is police intelligence and data.

"Criminal enterprises meet in specific areas and we need to disrupt those as it pertains to drug houses," Garcia said.

But he said his plan to reduce violent crime goes beyond making arrests.

"On the other hand, we need to give them hope with jobs, education heathcare, mental substance abuse programs to give people opportunity to choose the right path," he explained. 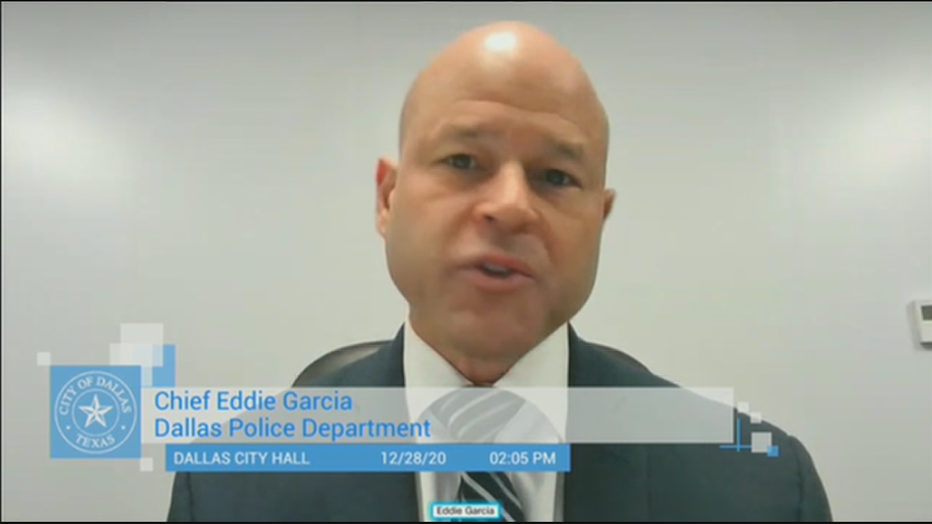 The 40-minute virtual news conference was tightly controlled, with only one question allowed from each reporter.

[REPORTER: "What do you think your biggest obstacle will be?"]

"One thing that will be something I need to work on is communication all seven stations," he responded. "We can come up with every great plan in the world to reduce violent crime, but if it is not communicated to officers working at 3 a.m. on a Wednesday, if they don’t feel that you have their back, if they don’t feel process are fair, no plan will work."

Garcia said he will work to gain the community's trust by admitting the mistakes of the past.

As for how to build trust with the rank and file as the second chief hired from the outside, Chief Garcia said one of his first moves will be to hire an executive assistant from within.

Garcia’s first official day on the job will be February 3, and he replaces outgoing chief, Renee Hall, who resigned in September to pursue other ventures.