Mayor Johnson sent a letter to VisitDallas CEO Sam Coats calling the organization for trying to take away his ability to appoint board members — without even telling him about it.

DALLAS - The organization that receives tens of millions of tourism tax dollars from Dallas may be trying to get out from under the city's watchful eye.

Dallas Mayor Eric Johnson sent the new interim CEO of VisitDallas a letter this week that said the proposed changes alarmed him.

Johnson sent a letter to VisitDallas CEO Sam Coats calling the organization for trying to take away his ability to appoint board members — without even telling him about it.

“The mayor will no longer have the ability to appoint any of the members over what will be the new VisitDallas Board,” Narvaez said.

In his letter to Coats, Johnson says he was not briefed about the proposal at a recent meeting. 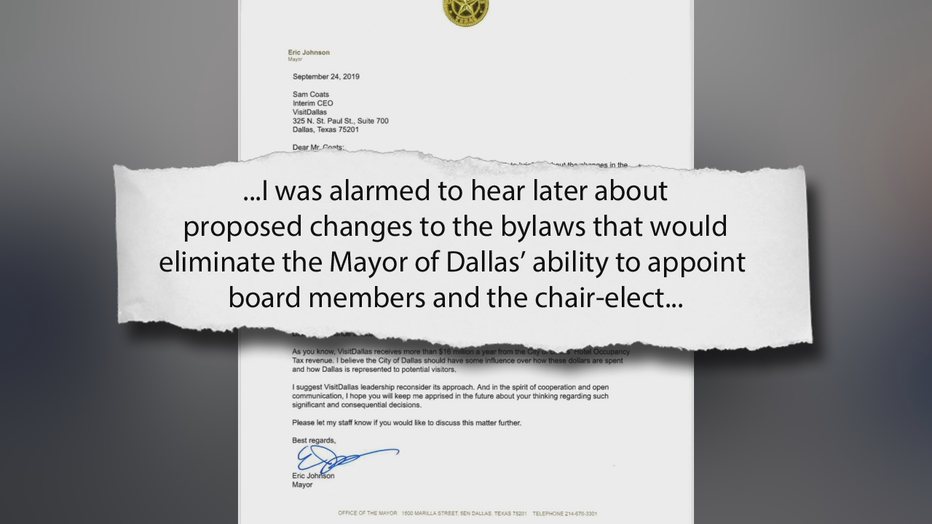 “I was alarmed to hear later about proposed changes to the bylaws that would eliminate the mayor of Dallas' ability to appoint board members and the chair-elect,” Johnson wrote.

Narvaez says the move concerned him, too.

“The reason we need those is so we have someone on the board who is able to see what's going on at VisitDallas,” Narvaez said.

VisitDallas receives more than $29 million a year from the city's hotel occupancy tax and the Dallas Tourism Public Improvement District.

“We need to make sure those dollars are being spent wisely,” Narvaez said.

A spokesperson for Coats provided FOX 4 a response letter he sent to Mayor Johnson saying the bylaws on the mayor's appointees would remain as is.

“The city contributes millions of tax revenue,” Coale said. “Any time you give money in that magnitude, you want to make sure it is going to the right places.”

Mayor Johnson’s chief of policy and communications said he’s received the letter but hasn’t had a chance to review it yet.

The city is set to decide whether to renew VisitDallas' contract with the city within the coming weeks.