Some Dallas ISD cafeteria workers landed on the cover of Time magazine. It was a nod to the risks they take to feed hundreds of school kids during the pandemic.

DALLAS - Some Dallas ISD cafeteria workers landed on the cover of Time magazine. It was a nod to the risks they take to feed hundreds of school kids during the pandemic.

The cover released last week came as a surprise to the team at T.W. Brown Middle School even after shooting photos for the magazine. They were still told it was just a possibility they might be featured.

It wasn’t until the cover came out that the cafeteria workers found out they were showcased for the vital work they do every day.

Dallas ISD cafeteria workers featured on the cover of Time

Six cafeteria workers in the Dallas Independent School District are on the cover of Time magazine.

Yolanda Fisher has been feeding kids at Dallas ISD schools for more than 20 years. But these days, it looks a bit different.

“So we’re just still doing something we love, and I’m happy we’re doing it,” Fisher said. “Because it’s a lot of kids, this is the only meal they get. Now that they’re out, they wouldn’t have gotten any meal. And we’re having the opportunity to still feed them.”

The team at T.W. Browne Middle School pack enough meals for 700 kids across seven schools to get through the week.

So when Time magazine got in touch with Fisher, the cafeteria manager, through the American Federation of Teachers Union which represents teachers and school staff, the team says it was both an honor and a pleasant surprise.

“We’re supplying food, and they were highlighting and doing a story on us,” Parker said. “I was all for it and I was shocked. To be honest about it, it’s kind of about time.”

More than 90 percent of kids at Dallas ISD are on a free and reduced lunch program. The district's food services team has made it a priority to make sure those kids still get fed, even though there's no end in sight to the current situation.

“The need is outstanding. I didn't think it was this large,” Fisher said. “Because when we first started out, I was just doing 300 lunches. Now, I’m up to 700 lunches.” 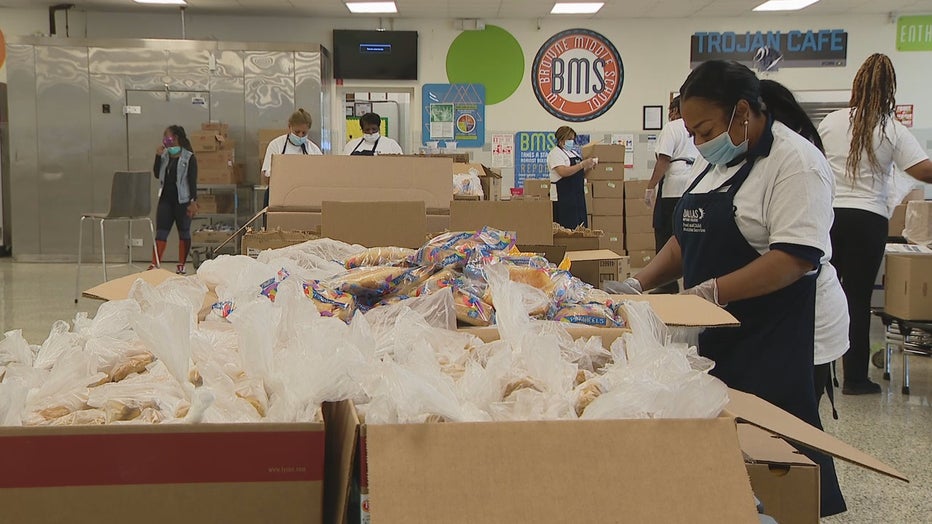 For now, the cafeteria workers are only getting to see some of their kids through car windows when they come by to pick up meals once a week. They are ready for the day everyone can come back to school.

“First thing if I can, I’d like to give them all a hug,” Parker said.

Meals are passed out once a week at multiple locations to students across the district from 10 a.m. to 1 p.m. They've also started delivering the meals to other sites to serve 300 kids who can't get to the regular meal distribution sites at school.