DALLAS - The city of Dallas is expanding testing at its mobile units in zip codes hit hard by COVID-19. Dallas is also preparing to open up more city parks.

Dallas Mayor Eric Johnson said on Wednesday that free testing at mobile testing units in the city’s zip codes with the highest numbers has now been expanded to people in all zip codes.

People using the mobile service must still lack transportation, be presenting symptoms or had recent contact with someone with COVID-19.

The city is asking the African American Pastors Coalition and its roughly 250 churches to help spread the word of the free services. Concord Church in South Dallas, a part of the coalition, is rallying with the city to ensure everyone is aware of the mobile testing that provides access to those in need. They say they have been working with the city of Dallas aggressively to serve the southern sector.

“We have been committed and will continue to be committed to making sure our community especially our church members and their families have resources they need to stay safe and healthy during this time,” said Senior Pastor Bryan Carter with Concord Church.

Concord Church in South Dallas says it had at least five members test positive and two have passed away.

“This has been a huge season for loss,” said Dr. Margo McClinton Stoglin with Concord Church. “You hear a lot of pastors talking about they’re going to various funerals and things of that nature.”

The city is working with urgentcare2go and expanding its mobile testing. It started off last Friday in five selected city zip codes. The city says it’s had the resources to test 60 people per day. But as of Tuesday, only 50 people signed up since it began.

“This testing service is free, but it is currently available only if you lack transportation to one of our drive-thru testing sites, if you present symptoms or if you have had recent direct contact with someone who has been diagnosed with COVID-19,” Johnson explained.

A majority who have been tested are ages 60 and up and black or Hispanic. That’s why the city is calling on organizations like the African American Pastors Coalition, which Concord is a part of, with roughly 250 other churches to spread the message.

The city of Dallas is expanding testing at its mobile units in zip codes hit hard by COVID-19. Dallas is also preparing to open up more city parks.

“We can actually accommodate more people than we could before,” Johnson said.

“So this is part of that effort to expand it, recognizing that we did have more and also it provides us additional information regarding where COVID-19 might exist in our community,” Baggett said.

Dr. Baggett is asked to collect all sorts of COVID-19 data and determine how that data fits into the scope of the pandemic in Dallas. He gave a rundown of what he’s observed in his first eight days on at the job and says they are digging deep about how to expand testing capability.

“In terms of prevention, we are being led and informed by the data and there continue to be data gaps that we need to close and accelerating what we are doing in terms of contact tracing,” Baggett said. “At this point, we should have a higher percentage of cases being identified by contact tracing.” 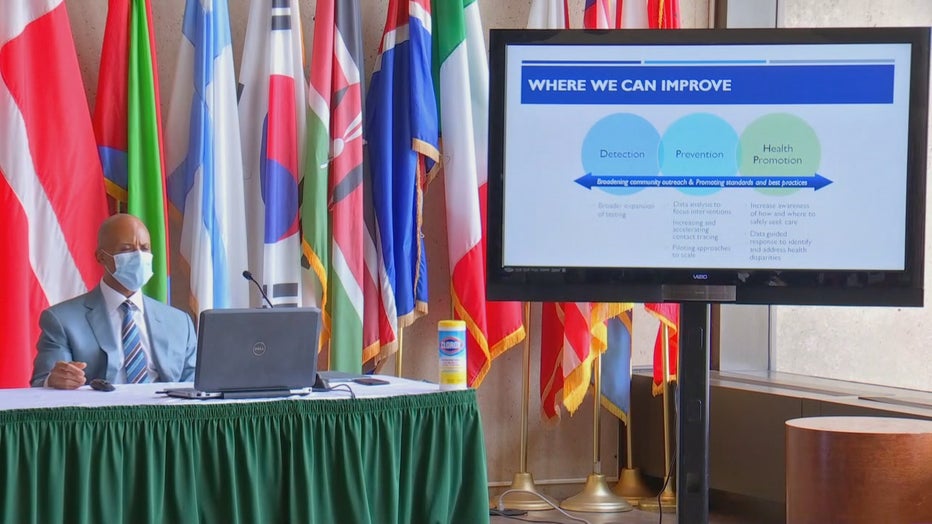 Concord Church, while not hosting services now due to the pandemic, says it helps people all the time without transportation by shuttling them in to services. They’re concerned some may be infected but don’t have access to testing.

“And that’s been part of the issue,” Stoglin said. “People just don’t know and then they can spread it.”

The head of the parks and recreation department also announced that starting Friday the city will open dog parks with foot pedals installed for touchless entry. Skate parks will be open at limited capacity. Row clubs can operate with one person per boat.