Dallas City Council members are taking a hard look at changing police policy to help restore trust within the community. And how officers are handling protests is a big part of that.

DALLAS - Dallas City Council members are taking a hard look at changing police policy to help restore trust within the community. And how officers are handling protests is a big part of that.

The goal is to provide short and long term areas of focus. But in order to move forward, some council members say they need to know change is happening as soon as now while protests are ongoing.

“We want to get the protesters out of the street, want to make sure their issues and concerns are addressed and heard,” said Dallas City Councilman Casey Thomas.

City manager TC Broadnax made it clear these are Hall’s recommendations.

They include a long list of immediate action items and short and long term goals, including the chief’s recent implementation of the duty to Intervene policy and implementation of a body and dash camera video release policy.

The plan also calls for expanding programs dealing with mental health calls as well as establishing an early warning system about officers with three or more incidents so they can receive additional training.

But on top of mind were the ongoing protests and the handling of one in particular that landed hundreds of protestors in police custody on the Margaret Hunt Hill Bridge last week.

“Everybody is watching. We are going to be held accountable for what we do know and what we have done,” said Dallas City Councilman Adam McGough.

Several council members pressed the chief for a full report. But the chief says resources that under normal circumstances would be put toward the report are now channeled toward ongoing protests, and that could continue indefinitely.

But on top of mind were the ongoing protests and the handling of one in particular that landed hundreds of protestors in police custody on the Margaret Hunt Hill Bridge last week.

“Do you want it timely or do you want it accurate? Because information changes based on video or other information that comes in,” Hall said. “So what we've agreed to do is look at each day a synopsis as much as we can as long as we're not held to an absolute. Because we're constantly getting information day after day.”

Chief Hall says every Dallas police officer has gone through de-escalation training. Some 300 have taken a class on "implicit bias." She says officers in the academy are also being trained on a state-of-the art 360 simulator. 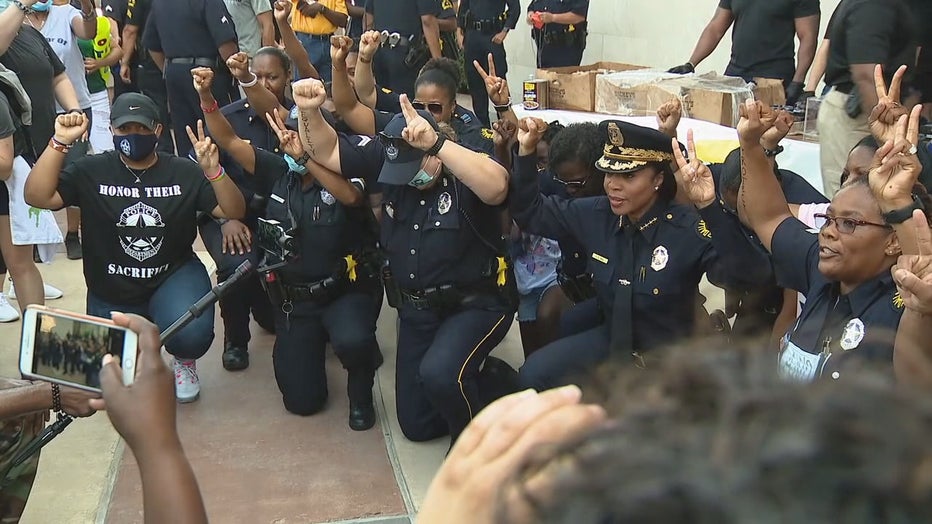 Dallas Police Association President Mike Mata says training a large police department takes time and, in his opinion, only does so much.

“It's great training but hard to do when you have 3,000 officers to put through,” he said. “But when it really comes down to it, it's are you a good human being or not? Do you believe in treating people well or not? So I absolutely believe in the training, but it's not the end all be all.”

Chief Hall says she does not have to undergo de-escalation training but has agreed to do so. She says once the protests are over, it's important for DPD and the community to come together to have "courageous conversations."

Others say they’ve seen a positive shift in protesters and policing. It’s a message that needs to be shared sooner than later.