Some council members are concerned that there hasn't been a competitive bid process to determine how to best use the land. Others believe playing soccer under a freeway would be a health hazard.

DALLAS - Dallas City Council members still have a lot of questions about plans to put soccer fields under a stretch of highway near downtown.

I-345 is the elevated highway in question between Interstate 30 and Woodall Rodgers on the east side of downtown. The development plan would require the city to give up its rights to the land to TxDOT.

Some council members are concerned that there hasn't been a competitive bid process to determine how to best use the land. Others believe playing soccer under a freeway would be a health hazard.

City council members heard the pitch from architect Roddrick West, the son of State Senator Royce West, an influential voice in the debate about the highway's future.

“Our solution is to provide 5 outdoor turf soccer fields,” Roddrick said. “That would have features of perimeter wall, LED lighting, bleachers, as well as net containment system to make sure balls are not flying all over the place.”

Senator West has been a vocal critic of plans to tear down I-345 and told FOX4 in December he had no business interest in his son's plans. But some believe the soccer fields would discourage tearing down the highway in the future.

Roddrick emphasized his proposal would be temporary.

“Fields can be put down and picked up in 2-3 day process. Every other item on the site can be removed and placed somewhere else. Nothing permanent,” Roddrick said. 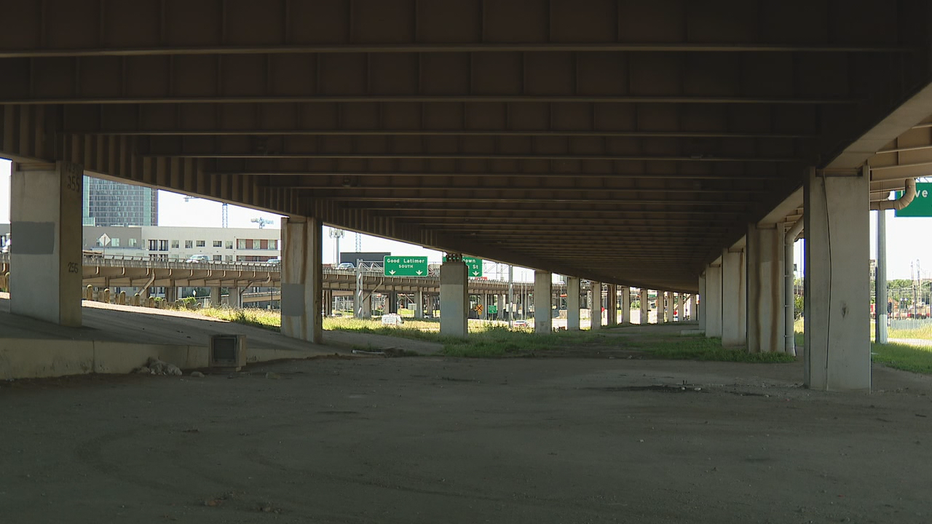 The city is being asked to give up its land rights to TxDOT, which would then lease the space to Roddrick west. TxDOT does not require a competitive bid process.

Some council members said they lacked information from city staff about the proposal.

“Being told I have to meet with developer to get site plan. Unacceptable, leaves a bad taste in my mouth. Puts me on a bad foot. Like soccer, but way we went about this really bothers me,” councilman Chad West said.

Councilman Lee Kleinman said he supported the project because whether i-345 is torn down or renovated, those plans are still 10 to 15 years away.

“I think this is opportunity to utilize what is a blighted space under the freeway,” Kleinman said.

Council is set to vote on the proposal in 10 days.

The agreement right now also includes plans for Carpenter Park, which would be larger than Klyde Warren Park, and 700 parking spaces for Deep Ellum.

Council members were told Monday that soccer field portion could be voted on separately.