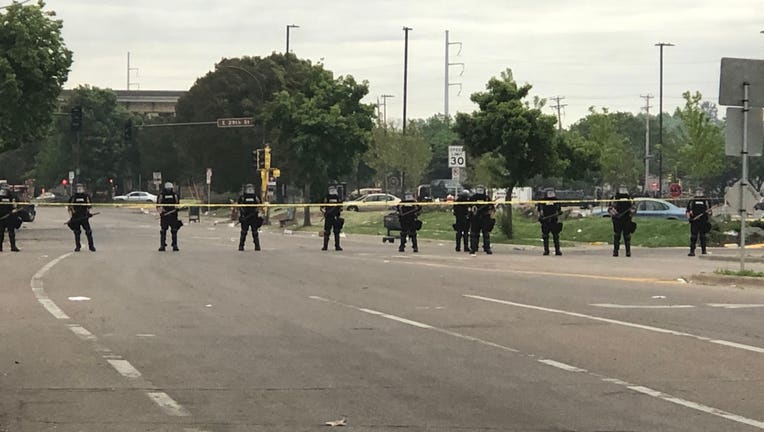 National Guard soldiers blocking 26th Avenue just north of the Third Precinct and beside the looted shell of a Cub Foods.

(FOX 9) - Curfews will go into effect starting at 8 p.m. on Friday in both Minneapolis and St. Paul after orders put in place by Governor Tim Walz and the mayors for both cities.

Under the governor's order, no one will be allowed on the streets of the Twin Cities from 8 p.m. until 6 a.m. except for first responders, members of the media, and people going to and from work.

Curfews will go into effect starting at 8 p.m. on Friday in both Minneapolis and St. Paul after orders put in place by Governor Tim Walz and the mayors for both cities

Those who violate the order will face arrest, Governor Walz says. The order mostly conforms will similar orders made by Mayor Jacob Frey in Minneapolis and Mayor Melvin Carter in St. Paul. The Minneapolis order, however, will last through the entire weekend, Mayor Frey said. Mayor Carter also warned his order may be extended if unrest continues.

Rioters damaged more than 170 businesses in St. Paul, Minnesota Thursday night into Friday morning as unrest grows in the Twin Cities over the death of George Floyd in Minneapolis police custody.

The orders follow riots, fires, and looting in the aftermath of protests on the death of George Floyd, a black man who died in police custody. The curfews also comes hours after one of the officers involved in Floyd's death was taken into custody and arrested for murder.

Gov. Tim Walz said Friday the state has taken the lead in responding to the protests over Floyd’s death, which have devolved into rioting and looting in both cities and surrounding communities.

The Minneapolis Police Department abandoned the Third Precinct Thursday night after rioters gained access to the building and set it on fire. Numerous businesses throughout Minneapolis and St. Paul were vandalized and burned, with many still smoldering on Friday morning.

The Minneapolis Police 3rd Precinct was set on fire by protesters Thursday night.

Walz activated the Minnesota National Guard Thursday afternoon, but they were not deployed to the Third Precinct until after midnight. Soldiers and state troopers secured the precinct and surrounding area and their “law and order” mission is ongoing.

Minnesota Gov. Tim Walz said Friday the state has taken over the response to protests In Minneapolis over the death of George Floyd after rioters set fire to the Third Precinct Thursday and looting continued throughout the city.