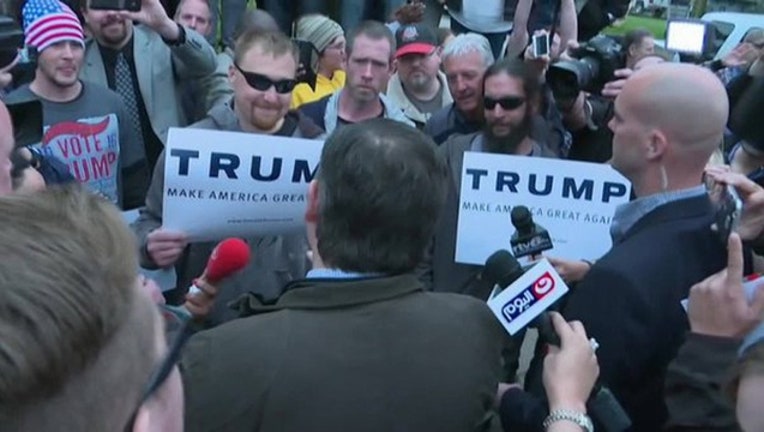 OSCEOLA, Ind. (AP) — Ted Cruz's conservative crusade for the presidency fought for new life Monday ahead of an Indiana vote that could effectively end the GOP's primary season. The fiery Texas senator hinted at an exit strategy, even as he vowed to compete to the end against surging Republican front-runner Donald Trump.

"I am in for the distance — as long as we have a viable path to victory," Cruz told reporters after campaigning at a popular breakfast stop.

With his supporters fearing Cruz could lose a seventh consecutive state Tuesday, the candidate's formulation hinted at a time when he may give up.

Like Ohio Gov. John Kasich, Cruz is already mathematically eliminated from reaching a delegate majority before the Republican Party's national convention in July. He retreated to Indiana more than a week ago, hoping a win could at least help him deny Trump an outright primary victory and lead to a contested convention.

At a stop in Monday in Marion, Indiana, Trump supporters confronted Cruz.

"What do you like about him?" Cruz asked the man. "Name one thing."

"Everything," the protester replied.

After six straight victories across the Northeast late last month, math and momentum are on Trump's side. The anti-Trump movement's only hope is to deny the billionaire businessman a 1,237-delegate majority by defeating him in Indiana and the handful of contests remaining over the next month. Then, Cruz or another candidate would have to beat him when delegates gather in Cleveland in July.

"Millions of Americans are praying for this state," Cruz said. "The entire country is depending on the state of Indiana to pull us back from this cliff."

"Indiana is Ted Cruz's firewall. It's where he says that it's make-or-break for him," Trump campaign manager Corey Lewandowski said. "And if he loses tomorrow night, he has to once again try and articulate why he is still in this race."

Tuesday features a primary on the Democratic side, too. New signs emerged that front-runner Hillary Clinton's chief rival Bernie Sanders is fading as well.

Sanders also refused to report how much money he had in the bank, raising questions about whether he can sustain his online fundraising dominance as his path to the nomination becomes less likely.

Shrugging off the numbers, Sanders, like Cruz, vowed to "fight hard as hard as we can for every vote."

He called the Democratic primary process "rigged," noting that he has won 45 percent of the pledged delegates awarded after primaries or caucuses, but only about 7 percent of superdelegates, the Democratic officials and party leaders who can support the candidate of their choice.

Still, Sanders showed no signs of letting up on Clinton, pointing to differences with the former secretary of state over fundraising, Goldman Sachs speeches, the Iraq war, fracking and the minimum wage.

With Sanders struggling for traction, Cruz barnstormed Indiana with five stops on Monday alone in a desperate sprint for support alongside his latest high-profile supporter, Indiana Gov. Mike Pence.

"We need every single vote," he declared at Bravo Cafe in Osceola, where he predicted a tight finish the next day.

Trump led by 15 points in an NBC News/Wall Street Journal/Marist poll conducted last week. That's even after Cruz took extraordinary steps to boost his chances in the state.

He announced his pick for vice president last week, unveiling former businesswoman Carly Fiorina as his running mate at an Indiana stop that appeared rushed. Days earlier, he declared alliance of sorts with Kasich in which the Ohio governor agreed to pull his advertising from Indiana airwaves.

The strategy seemed to unravel even as it was announced. And it may have backfired. The NBC poll found nearly 6 in 10 Indiana primary voters disapproved of the Cruz-Kasich arrangement.

Trump's advantage comes even as he's getting badly outspent on advertising in the state.

He has spent about $1 million on ads over Indiana airwaves, while Cruz's campaign, pro-Cruz super PACs and anti-Trump groups have combined for about $6.4 million, according to data from Kantar Media's Campaign Media Analysis Group.

On the Democratic side, Clinton's campaign hasn't dropped a dollar on television or radio advertising in Indiana. Vermont Sen. Bernie Sanders has spent $1.8 million.

Trump, for his part, held a pair of rallies in the state Monday. But he was already looking past Cruz and setting his sights on his likely Democratic opponent.

"Indiana is very important, because if I win that's the end of it," Trump said at an unscheduled stop at Shapiro's Delicatessen in Indianapolis.