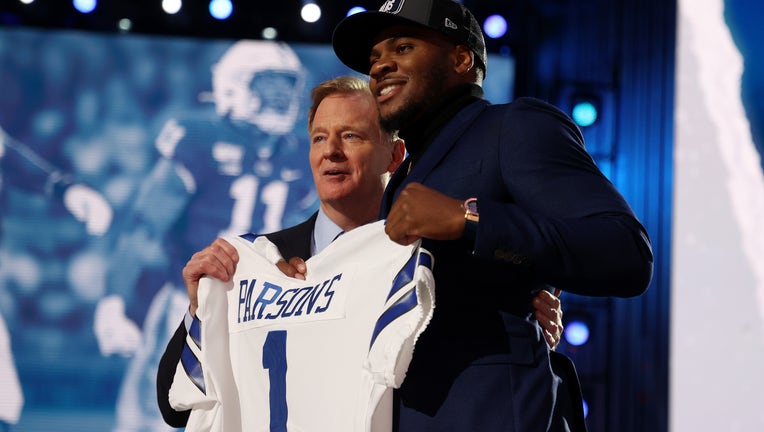 CLEVELAND, OHIO - APRIL 29: Micah Parsons poses with NFL Commissioner Roger Goodell onstage after being selected 12th by the Dallas Cowboys during round one of the 2021 NFL Draft at the Great Lakes Science Center on April 29, 2021 in Cleveland, Ohio.

The Cowboys picked up a third-round pick from the Eagles in the trade, the 84th overall selection. The deal gives Dallas three picks in the third round. Philadelphia took Alabama receiver DeVonta Smith.

Dallas made the move down after two cornerbacks the club was targeting at No. 10, South Carolina's Jaycee Horn and Patrick Surtain II of Alabama, were taken eighth and ninth by Carolina and Denver, respectively.

Parsons opted out of the 2020 season over COVID-19 concerns. He was an Associated Press All-American as a sophomore in 2019 when he led the Nittany Lions with 104 tackles, including 14 tackles for loss.

Owner and general manager Jerry Jones hinted two days before the draft the Cowboys might move off the 10th pick, indicating it was more likely to be down than up because they just signed Dak Prescott to a $160 million, four-year contract with five projected first-rounders at quarterback available.

The closest thing to a need on offense for Dallas is tackle, but only because Tyron Smith just turned 30 and has missed a troubling number of games because of neck and back issues. The seven-time Pro Bowler played just two games last year before season-ending neck surgery.

Defense was the biggest draft need last year as well, but receiver CeeDee Lamb unexpectedly fell to the Cowboys at No. 17. They ended up getting a starting cornerback in the second round in Trevon Diggs.

While Dallas still needs playmakers on defense, it’s not like the club has ignored that side the ball in recent drafts. Before this year, the Cowboys had taken a defensive player with their first pick in four of the previous six drafts. The first-round picks in that stretch haven’t been long-term solutions so far.

Cornerback Byron Jones (2015) signed with Miami in free agency last year. Defensive end Taco Charlton (2017) was released before his rookie deal expired, and the Cowboys have yet to exercise the fifth-year option on oft-injured linebacker Leighton Vander Esch ahead of Monday's deadline.

The Cowboys need more pass rushers, with Randy Gregory slated to start opposite DeMarcus Lawrence after Dallas decided not to re-sign Aldon Smith. That was a year after Dallas let a productive Robert Quinn go to Chicago in free agency.

The interior defensive line should get a boost from a healthy Trysten Hill, the Cowboys’ top pick as a second-rounder two years ago. Hill tore a knee ligament five games into last season.