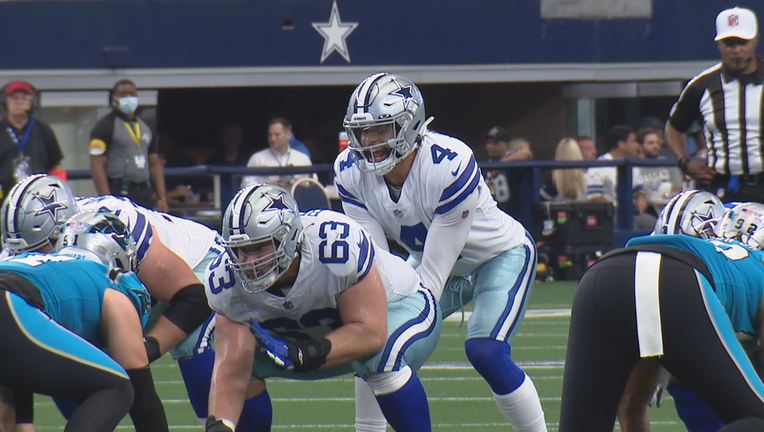 ARLINGTON, Texas - Mike McCarthy knows the feeling of early momentum on the way to playoff contention, something the Dallas Cowboys have for the first time since he became coach last year.

The former Green Bay coach last felt it four years ago, just before things turned south in his long tenure with the Packers when star quarterback Aaron Rodgers got hurt.

Dak Prescott's season-ending ankle injury in Week 5 last year had a lot to do with McCarthy's Dallas debut being a dud almost from the start.

Prescott has been spectacular in his return leading an adaptable offense, and the Cowboys (3-1) have won all three games since a last-second loss to defending Super Bowl champion Tampa Bay in the opener when plenty of pundits were saying Dallas had no chance.

"We needed to win early this year," McCarthy said. "That was clearly evident coming off of last year. We’ll still evaluate the same way, win or no win. I’m not really big on comparables. It’s not really fair to this team or teams in the past. I love the vibe of our group."

A three-game winning streak actually isn't new to McCarthy in Dallas because the Cowboys had one despite their 6-10 finish last year. Problem was, it came when the team was 3-9 after injuries to Prescott and several other key players on offense.

This time, Dallas is alone in first place in the NFC East for the second straight week.

"We've got a long way to go," said Prescott, who threw for four touchdowns among his 188 yards passing. "Our expectations and standards are to be the best. Whether we're 3-1 or whatever the record is, it's about the next game."

The shift in offensive production from the opener to now is something to behold. Prescott threw for 403 yards while the Cowboys basically ignored the running game in the 31-29 loss to the Buccaneers. In three games since, Dallas is averaging 201 yards rushing.

Ezekiel Elliott ran for 143 yards in his first triple-digit game of the season against the Panthers, who entered the game leading the NFL in all three defensive yardage categories — total, rushing and passing. Tony Pollard has three consecutive games with at least 60 yards for the first time in his two-plus seasons.

"We’ve done a great job getting the running game going," Elliott said. "If we can do that, we can do anything off of that."

The Cowboys erased a one-point halftime deficit with three TD passes from Prescott in the third quarter, but they let up in the fourth against Carolina. It was a one-score game when Dallas took possession with 4:31 remaining. The dominant running game got going again, and the Cowboys ran out the clock.

"We played really well the first month of the season, but the biggest thing I want to see is play a complete game," Elliott said. "I think we kind of let our foot off the gas pedal."

Despite leading the wide receivers in snaps against Carolina, CeeDee Lamb had just two catches for 13 yards. His receiving yardage has steadily declined each week since the 2020 first-round pick had 107 yards against Tampa Bay.

Diggs sat in the fourth quarter because of back tightness while Carolina rallied but said he could have returned. ... WR Amari Cooper missed some plays early because of a hamstring issue, but returned to score a touchdown and lead the Cowboys with 69 yards receiving. ... WR Michael Gallup (calf strain) will be eligible to come off injured reserve. ... LB Keanu Neal and DE Bradlee Anae could be ready to return after missing two games because of COVID-19 protocols.

3 — The number of rookies with at least half a sack against Carolina. Micah Parsons had one to give him a team-leading 2½ sacks while Osa Odighizuwa and Chauncey Golston had a half-sack apiece. It's the first time the Cowboys had three rookies get to the quarterback in the same game since DeMarcus Ware, Chris Canty and Jay Ratliff at Oakland in 2005.

The Cowboys finish a three-game homestand Sunday against the New York Giants, the second NFC East foe in that stretch. It's the same opponent on the same week in the same stadium where Prescott fractured and dislocated his right ankle last year.