A North Texas nurse was off the grid in Alaska when a plane crashed nearly in front of her group. She and others went to work in the cold to rescue a couple and their baby while waiting for help that was more than an hour away. "It all just like fell together into this crazy miraculous moment where everything lined up perfectly."

A North Texas nurse was off the grid in Alaska when a plane crashed nearly in front of her group.

She and others went to work in the cold while waiting for help that was more than an hour away.

The nurse from Coppell said if it wasn't for a zipline excursion being rescheduled, she and others wouldn't have been there to save a family after a plane crash.

Nurse Tammy Saunders and administrator Jon Brooks from Grapevine Faith Christian School found themselves in the middle of a nerve-racking rescue.  Both are chaperones on a two-week leadership trip with high schoolers in Alaska.

"Every nurse I know and worked with would’ve done the same thing without hesitation," Saunders said.

"So we have students that were trying to prepare for life and it doesn’t get more real when life is on the brink there," Brooks said.

Saturday afternoon, the group went ziplining when a plane began circling low. Shortly after it disappeared behind the trees, they heard the crash.

Brett Winterbottom was working the zip lines that day.

"I was like, ‘Does anyone have medical training?’" he recalled. "And this poor nurse raises her hand. She’s like, ‘I’m a nurse.’ And I was like, ‘Come with me!’" 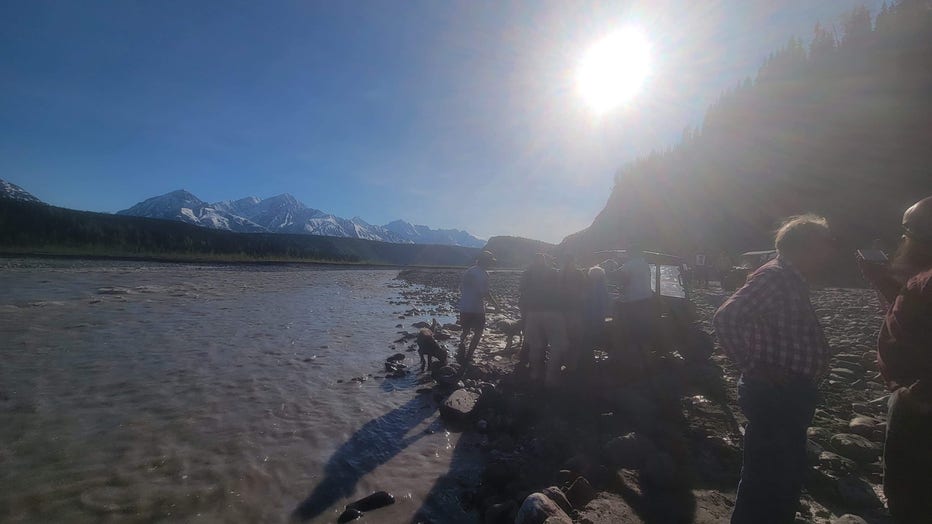 In shock, Winterbottom and Saunders spotted a mother, a father and their 7-month-old baby floating down the Matanuska River on an airplane tire. The plane was in pieces.

Winterbottom tied a rope around his waist and began wading into the 35 degree water. The child's father, Logan, was in the middle of the swift current.

"Logan was holding the baby above the water. Enzo is the baby’s name," Saunders recalled. "But the plane kept breaking apart, and he was so weak. He went into the water with the baby.

Winterbottom grabbed baby Enzo and passed him off to Saunders and then went back to pull the father onto the bank.

"At the time, I didn’t know if Enzo was breathing. He was blue. He was cold and unconscious," Saunders said.

Enzo's mother was able to swim to the opposite shoreline on her own.

Saunders quickly wrapped baby Enzo up in blankets while stabilizing his neck. He appeared to have a serious head injury.

Finally, Enzo began to cry and open his eyes.

More than an hour later, first responders arrived and transported the family to the hospital.

"It all just like fell together into this crazy miraculous moment where everything lined up perfectly," Winterbottom said. "I would say if you did the odds, those people weren’t supposed to survive."

Grapevine Faith Christian sent baby Enzo a message of encouragement. The group continuing their trip that couldn’t have had better timing.

"You could have a month and not be able to stage this as perfect as it was staged. And it happened like that," Brooks said.

The mother and father were released from the hospital Sunday, but they’re still there.

Baby Enzo is out of the ICU but still recovering.