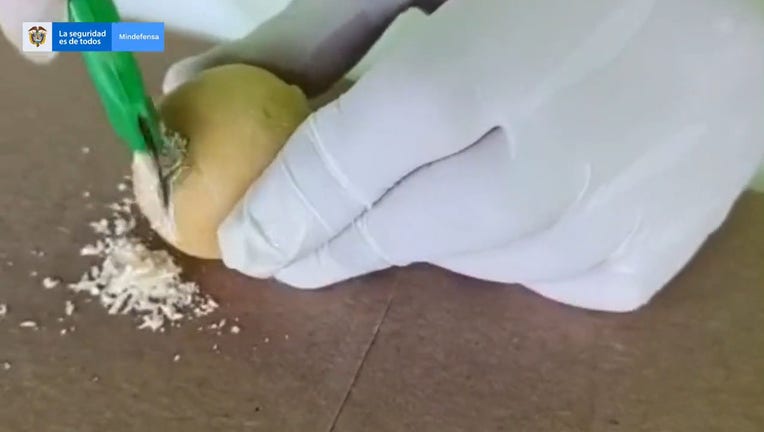 Authorities in Colombia recently seized a shipment containing 1,000 kilograms (over 1 ton) of cocaine that was disguised as potatoes and frozen chips, according to police and news reports.

A video of the seized shipment was shared on Wednesday by Colombia’s Ministry of National Defense, which showed officers extracting cocaine from the fake food.

"The intelligence of the @PoliciaColombia dealt a resounding blow to drug trafficking by seizing a shipment of refrigerated and vacuum-sealed cocaine simulating yuccas and Creole potatoes," the defense ministry wrote, according to an English translation.

It added that the shipment was destined for Spain.

Anti-Narcotics Police Major General Ricardo Augusto Alarcón Campos, who appears in the video, said police received a tip from an anonymous caller about the shipment, according to 9News, a national news network in Australia.

"This may be the most innovative case discovered by drug traffickers in recent years, they had designed the drug in irregular molds simulating croquettes of cassava and papa criolla," Campos said, according to the outlet.

Campos added that fake food was deceiving, but the packaging had no expiration date, which caused suspicion, 9 News reported.

Cocaine comes from coca leaves grown in Colombia, as well as Bolivia and Peru. It’s made in remote jungle labs where the raw product undergoes a series of chemical transformations, according to the U.S. Drug Enforcement Agency.

Colombia produces about 90% of the cocaine that reaches the U.S., the DEA notes — adding that most of the powder that enters the U.S. comes through Mexico.

Earlier this month, a 22-year-old man was arrested at the airport in Charlotte, North Carolina, after agents found more than 23 pounds of cocaine stashed inside the wheelchair he was using.