Dallas-area U.S. Congressman Colin Allred and challenger Genevieve Collins squared off in a debate Thursday with less than two weeks to go before the election.

DALLAS - Dallas-area U.S. Congressman Colin Allred and challenger Genevieve Collins squared off in a debate Thursday with less than two weeks to go before the election.

In a race filled with attack ads, the debate sponsored by the Dallas Regional Chamber of Commerce stayed somewhat civilized. But there were heated exchanges when Republican challenger Collins accused the District 32 incumbent of voting to defund police.

“Who decided that after this summer and Democrats only talking about defunding the police, enabling anitfa, and riots across our community, that they would take out $600 million in their own bill for our police. I think that’s unconscionable and unacceptable,” Collins said. 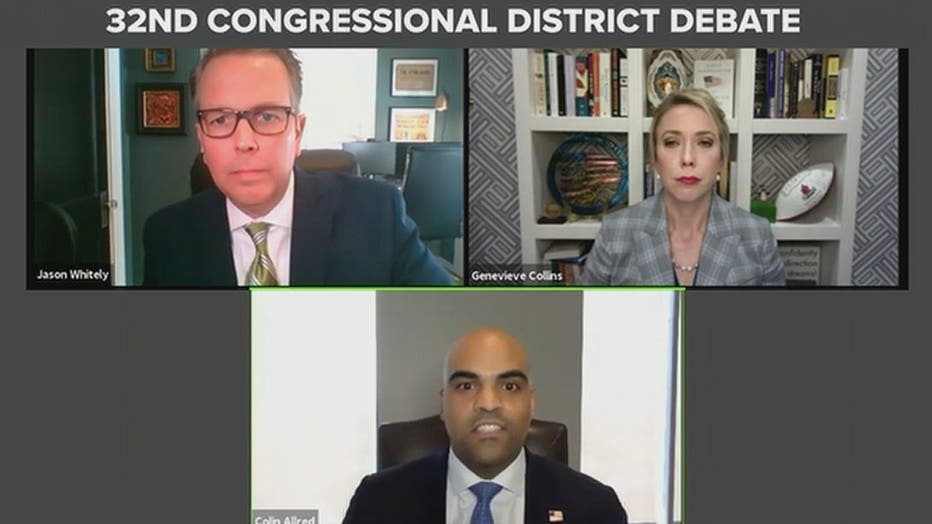 Allred argued it was Senate Majority Leader Mitch McConnell who forced the removal of $600 million for law enforcement from a federal relief bill.

“You’re trying to mislead people, you’re trying to convince them I something I’m not. And you’re also doing it in a way that makes it harder to heal some of these racial wounds we’re talking about. At a time when we should be coming together, you are pitting us against each other,” Collins said.

On healthcare, Collins advocated for a replacement to the Affordable Care Act.

“Unlike what my opponent has been trying to slay me on television, I think we have to protect people with pre-existing conditions,” Collins said.

“Kids like Olivia Solis … would have blown thru their coverage in first months of her life,” Allred said.

Just after the one year anniversary of the devastating tornado outbreak in North Dallas, Collins blamed Allred for not securing funding from FEMA.

“I led effort with Sen. Cornyn to appeal that decision and they again turned us down. I completely disagree with the way they are using that program, I think that goes against the intention of it. We are paying into that system, we should have gotten that aid,” Allred said.

That wasn’t enough for Collins.

“You wrote a letter. I would march up to their offices in D.C., bang on their doors and say, ‘We are meeting in person and we’re going to work this together.’ Can't just write a letter, that’s just a cop out,” Collins said.