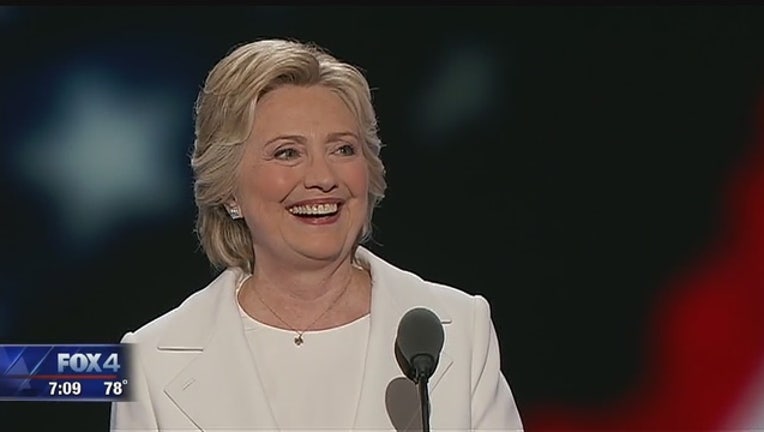 WARREN, Mich. (AP) — Her political fortunes flourishing, Hillary Clinton attempted to undercut Donald Trump's claim to working class voters Thursday, portraying her Republican rival as untrustworthy on economic issues and pushing policies that would only benefit the super-wealthy — himself included.

The Democratic presidential nominee sought to seize momentum as Republicans — including Trump — struck an almost defeatist note about their Election Day chances. As Republican leaders sounded alarms about Trump's unconventional approach, Clinton attacked was she dubbed "outlandish Trumpian ideas" that have been rejected by both parties.

"Based on what we know from the Trump campaign, he wants America to work for him and his friends, at the expense of everyone else," she said, at a manufacturing company.

Appearing in the county known for the so-called Reagan Democrats — working-class Democrats who voted Republican in the 1980s — Clinton tried to seize the opportunity to win back some of the blue collar voters who've formed the base of her rival's support, making the case that she offers a steadier roadmap for economic growth and prosperity.

"I can provide serious, steady leadership that can find common ground and build on it based on hard but respectful bargaining," she said. "I just don't think insults and bullying is how we're going to get things done."

Clinton, who frequently boasts about her numerous policy plans, didn't offer any new, major ideas to improve the country's economy in her afternoon address. She reiterated her strong opposition to the Trans-Pacific Partnership trade deal, leaving herself little room for backtracking should she win the White House if it is taken up by the lame-duck Congress later this year.

Clinton once called the TPP the "gold standard" of trade deals when she served as Obama's secretary of state but announced her opposition to the deal last year, saying it did not meet her standard for creating jobs, raising wages and protecting national security.

Hoping to keep the pressure up on Trump, Clinton is also planning to release her 2015 tax returns in the coming days. Trump has said he won't release them until an IRS audit is complete, breaking traditional with every presidential candidate in recent history.

A source close to Clinton said she would soon release the return, supplementing the decades of filings she and her husband have already made public. Her running mate, Sen. Tim Kaine and his wife will also release the last 10 years of their taxes. The source spoke on condition of anonymity to discuss the plans in advance.

Her appearance followed Trump's own speech on the economy, which he delivered in Michigan on Monday. But his scripted remarks were quickly eclipsed by the latest in a series of blunders and controversial statements that appear to have handed Clinton's campaign a boost in the polls, particularly with Republican women and college-educated voters that make up a key piece of the GOP base.

Just hours before her address, Trump unleashed another round of attacks on Democrats, calling Obama the "founder" of the Islamic State militant group — and Clinton, its co-founder.

The Republican presidential nominee brushed off conservative radio commentator Hugh Hewitt's attempt to reframe Trump's observation as one that said Obama's foreign policy created the conditions in Iraq and Syria that allowed IS to thrive.

"No, I meant he's the founder of ISIS. I do," Trump said, using another acronym for the extremist group that has wreaked havoc from the Middle East to European cities.

The latest bit of controversy shook Republicans, already rattled by polling showing Trump losing support among women and other segments of their party's base.

Dozens of frustrated Republicans gathered signatures Thursday for a letter to Republican National Committee Chairman Reince Priebus that urges the party chief to stop helping Trump and instead focus GOP resources on protecting vulnerable Senate and House candidates. Speaking to reporters in Kentucky on Thursday, Senate Majority Leader Mitch McConnell described Republicans' chances of keeping control of the Senate after the November elections as "very dicey."

A draft of the letter, which operatives say has at least 70 signatories, warns that Trump's "divisiveness, recklessness, incompetence, and record-breaking unpopularity risk turning this election into a Democratic landslide."

Trump said he had no intention of changing his inflammatory approach to presidential politics, pledging in a CNBC interview to "just keep doing the same thing I'm doing right now."

But he seemed to acknowledge the risk his campaign — and party — was taking. "At the end, it's either going to work or I'm going to, you know, I'm going to have a very, very nice long vacation," he said.