City of Grapevine, American Airlines hold event to remember those who lost their lives on 9/11

The city of Grapevine and American Airlines flight crew members gathered 20 years, to-the-minute, since terrorists attacked the United States on 9/11.

The city of Grapevine remembered those that lost their life, in collaboration with American Airlines.

In particular, they honored the crew members who died that day and are often referred to as the first, first responders.

Saturday was a day of remembrance.

The city of Grapevine and American Airlines flight crew members gathered 20 years, to-the-minute, since terrorists attacked the United States on 9/11.

"I’m sure today rips off the scab. They find themselves right back in the same place where they were 20 years ago," Grapevine Fire Chief Darrell Brown said.

"A day that we all know is still very difficult," American Airlines pilot Beverley Bass said.

Bass recalled being overseas in Paris at the time.

"That morning, we were preparing for our 10-hour flight back to Dallas. As I recall, it was a beautiful, cloud-free day over the north Atlantic," she said.

Instead, her crew was forced to land in Gander, Newfoundland.

"All of the U.S. airspace was closed for the first time in the history," she said.

Most people remember exactly where they were when the World Trade Centers were hit.

Steve and Mary-Ann Zrake pulled their daughters out of school.

"Saw the first plane hit the tower on the news and I was like oh my gosh," Steve recalled. 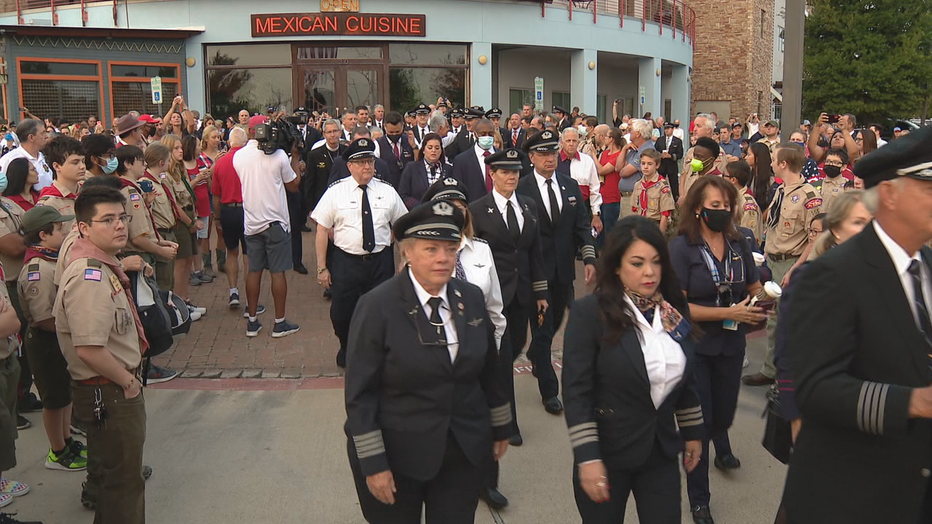 But 20 years later, some young adults weren’t even born.

"Many of you have only been told about the events or read about it in newspapers or books," Bass said at Saturday’s event.

There are a countless number of heroes who answered the call that Tuesday in September 2001.

"The first responders both in the air and on the ground answered that call," Bass said.

Police officers from across North Texas rode through Grapevine to do their part in making people remember the lives lost. It’s an attack that hit more than 1,500 miles from North Texas, but the effects forever changed the entire nation.

"It is a day that represents reflection, pain, scars, and more importantly, healing," Bass said.

"And we will never forget," Brown said.