How car recalls get reported

Tens of millions of vehicles are recalled every year in the U.S. to repair a wide range of issues, from faulty headlights and windshield wipers to even more serious problems that could cause a fire or crash.

This year is no different: The U.S. National Highway Traffic Safety Administration issued 300 recalls for major car manufacturers in 2022, affecting millions of vehicles.

Car companies are required to notify owners by mail about the recall, but if the car has been sold, the next owner may not get the notification. Car sellers are not required to get any recalled parts repaired before selling their cars, and they don’t even have to notify you about a recall when selling you a car, according to FOX Business. In many cases, the car sellers aren’t aware there’s a recall in place.

That’s why it’s so important for car owners to see for themselves if their vehicle is under recall.

How to see if your car is under recall

Looking up recalls for your vehicle is easy.

To see if your car is under recall, visit the NHTSA’s recalls website. You’ll be asked to enter your car’s 17-digit vehicle identification number (VIN), which is typically located on both the lower left corner of your car’s front windshield and on the driver’s side door jamb. 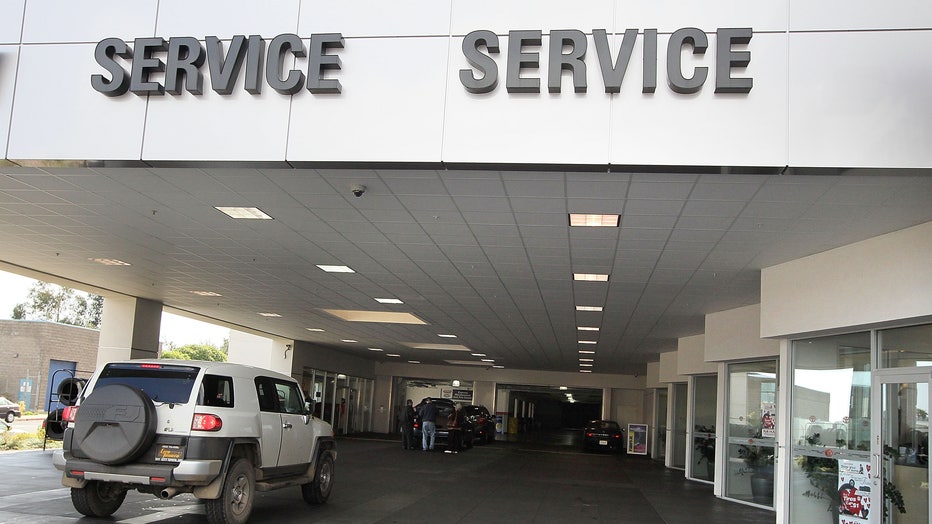 Once you enter the VIN number, the NHTSA will tell you if you have an unrepaired vehicle that’s been recalled in the past 15 years. It won’t tell you if your car was previously under recall but has since been repaired.

It also doesn’t show recalls for foreign cars, which means the NHTSA doesn't provide recall data on Toyota and Honda vehicles sold in the U.S. You can visit the Honda and Toyota manufacturer websites to see if your car is under recall.

Carmakers with the most recalls in 2022

Here’s a breakdown on how many vehicle recalls were issued in the U.S. this year. Click here to see a full list.

Some of Ford’s major recalls for 2022 include a fractured driveshaft impacting nearly 250,000 F-250 and F-350 Super Duty vehicles, and an engine oil leak potentially affecting nearly 350,000 Ford Escapes and Broncos. 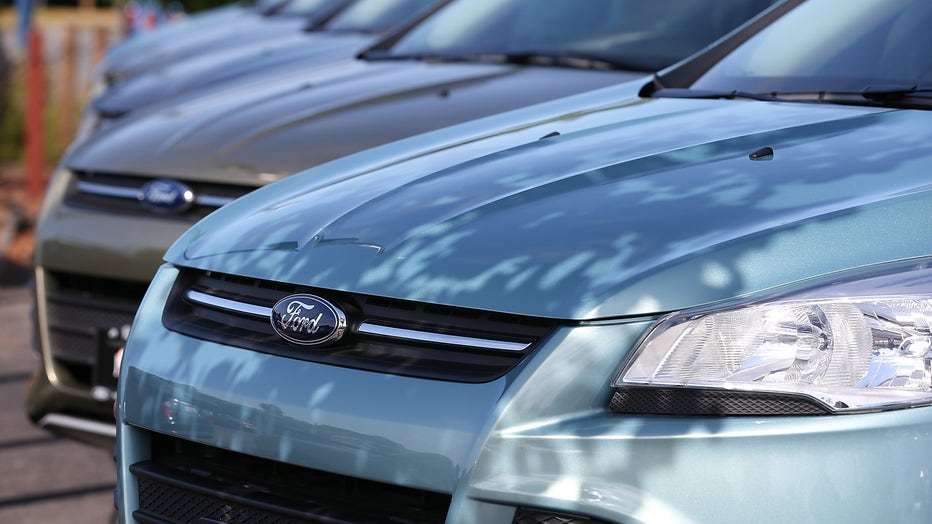 Ford said it has received 20 reports of fires, including three that ignited nearby structures, linked to another major recall, this one involving a fuel injector leak. The company also said it has four claims of fires that were noticed less than five minutes after the engines were turned off. Ford also has four injury claims not involving burns, and 43 legal claims attributed to the problem. 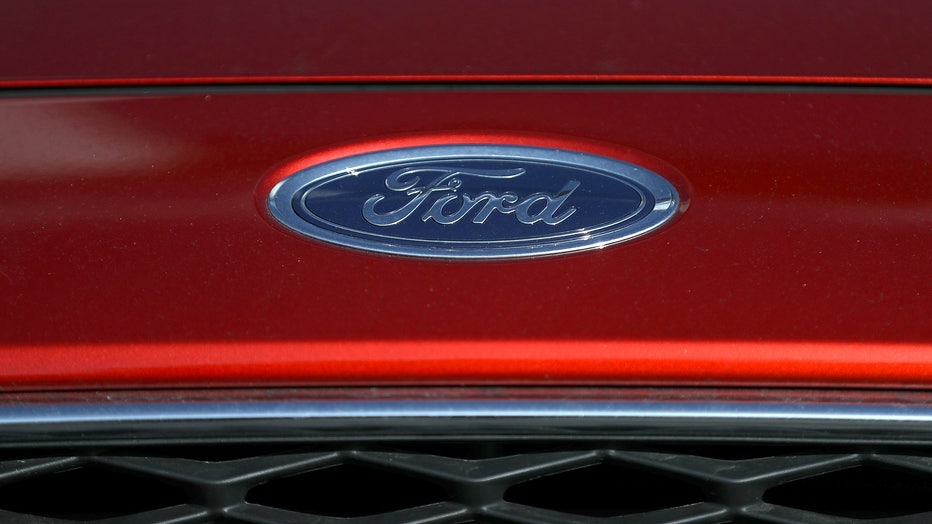 COLMA, CA - OCTOBER 25: The Ford logo is displayed on a brand new Ford Focus car at Serramonte Ford on October 25, 2018 in Colma, California. Ford announced the recall of over 1 million 2012 through 2018 model-year Ford Focus cars in North America wi

In June, the company recalled nearly 3 million vehicles for a problem that could "prevent the vehicle from shifting into the intended gear, and cause the vehicle to move in an unexpected direction."

"Additionally, the vehicle may roll after the driver selects the 'Park' position," the recall states.

In March, Volkswagen recalled more than 246,000 SUVs in the U.S. and Canada because faulty wiring harnesses can make them brake unexpectedly, sometimes while in traffic. 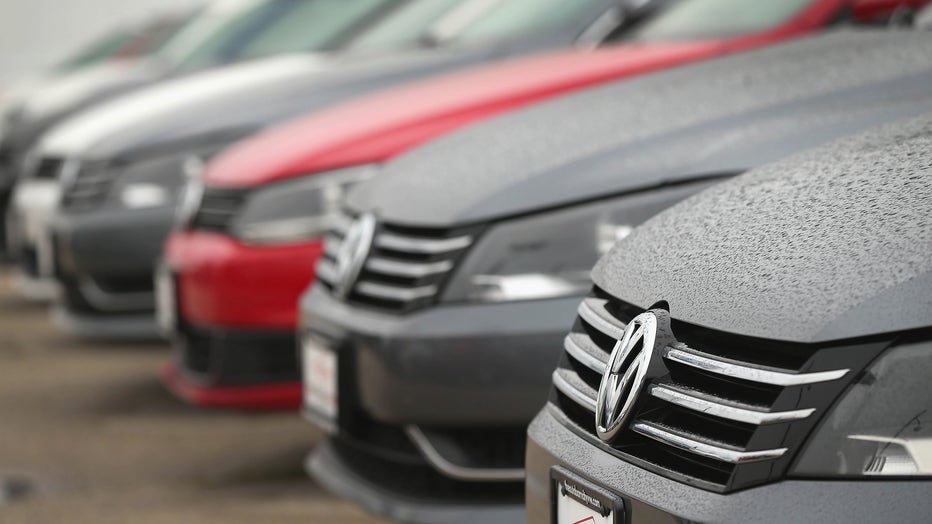 The recall came three days after The Associated Press reported that 47 people had complained to U.S. safety regulators about the problem, some reporting nearly being rear-ended by other vehicles. Many reported that warning lights and alarms would go off, the driver's side windows would roll down and the SUVs would suddenly brake while in traffic.

In late November, nearly 250,000 heavy duty diesel Ram pickup trucks were recalled in the U.S. because transmission fluid can leak and cause engine fires. The recall covers certain 2020 to 2023 Ram 2500 and some 2020 through 2022 Ram 3500 trucks. All have 6.7-liter Cummins diesel engines and 68RFE transmissions. 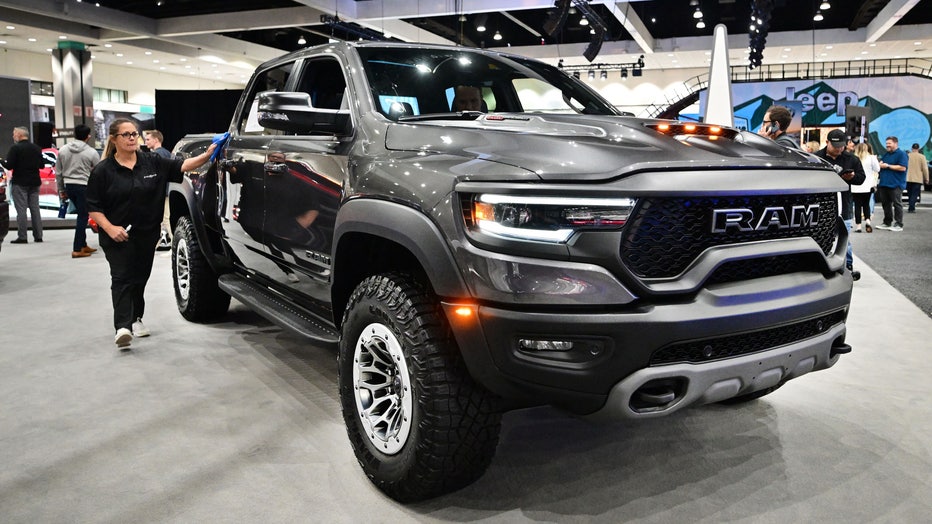 The company says heat and pressure can build up in the transmission, expelling fluid from the dipstick tube. If the fluid hits a hot engine part, that can touch of a fire.

Stellantis, formerly Fiat Chrysler, was still developing a repair. The company says it had 16 reports of fires and 48 complaints, field reports and warranty claims due to the problem. It's aware of one minor injury caused by the issue.

On Dec. 8, Chrysler recalled more than 1.2 million Dodge Ram pickup trucks because the tailgates could open while driving.

In May, Mercedes warned over 292,000 customers with select ML, GL, and R-Class vehicles between the 2006 and 2012 model years to stop driving them.

The German automaker said in a recall notice that moisture can accumulate and cause corrosion in the cars' brake booster housing units, potentially resulting in a vacuum leak and reduced brake performance. 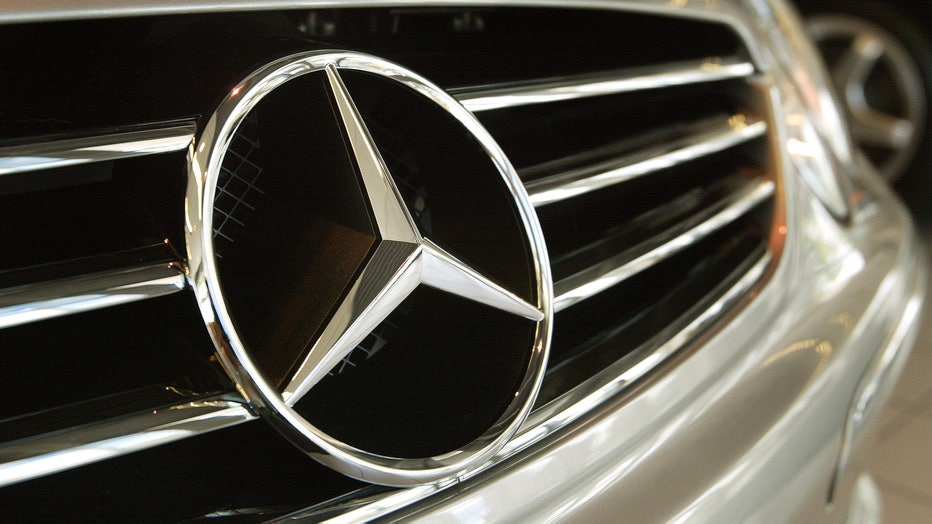 In rare cases of very severe corrosion, hard breaking could potentially cause mechanical damage to the brake booster, resulting in brake failure and increasing the risk of a crash. A foot-activated parking brake would still work.

As of May, there were no reports of crashes, injuries or deaths related to the issue.

The recall covers the Chevrolet Equinox and GMC Terrain from the 2014 and 2015 model years. Ball joints in the wiper module can rust, causing one or both wipers to fail, increasing the risk of a crash. 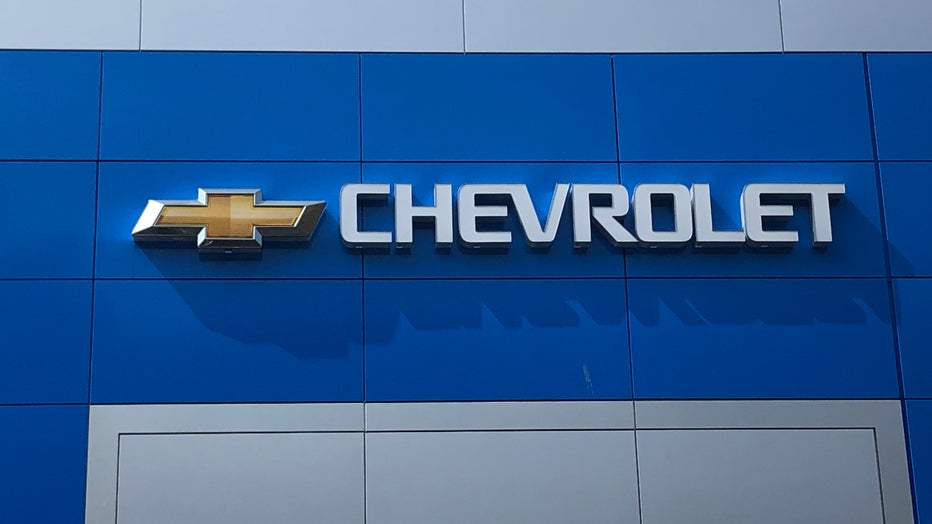 In November, General Motors recalled close to 340,000 big sport utility vehicles because their daytime running lights may not shut off when the regular headlights are on.

The NHTSB said that having both lights on at the same time could cause glare for oncoming drivers, increasing the risk of a crash. The recall covers certain 2021 Chevrolet Tahoes and Suburbans, as well as some GMC Yukons and Cadillac Escalades.

In January, Kia recalled more than 410,000 vehicles in the U.S. over concerns about airbags that may not deploy in a crash. 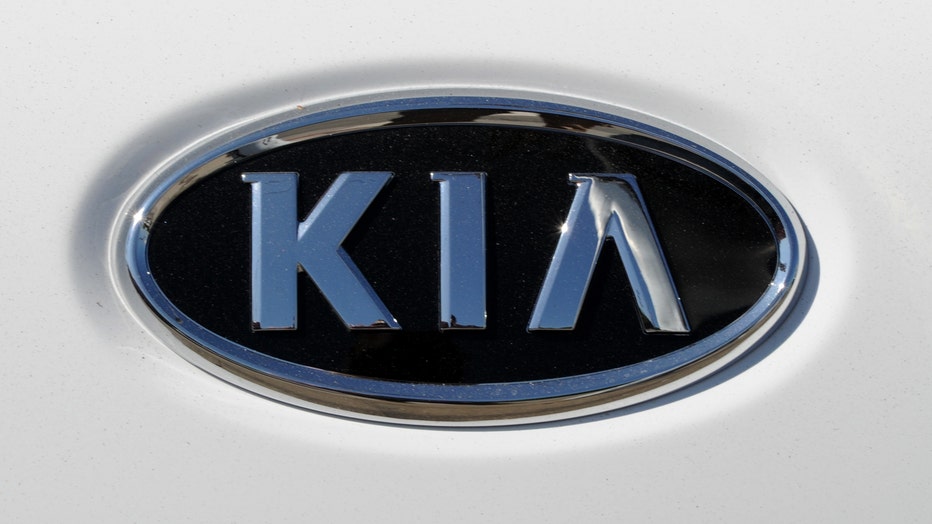 In August, Hyundai and Kia told owners of some of their large SUVs to park them outdoors and away from buildings after a series of fires involving trailer hitch wiring.

The Korean automakers recalled more than 281,000 vehicles in the U.S. because of the problem.

The same problem occurred two months later, when Kia recalled another 72,000 older Sportage small SUVs in the U.S. and told owners to park them outdoors and away from structures after getting reports of more engine fires.

Hyundai and Kia both had vehicles included in the August 2022 recall that told owners of some of their large SUVs to park them outdoors and away from buildings after a series of fires involving trailer hitch wiring.

More than 281,000 vehicles in the U.S. were recalled because of the problem. 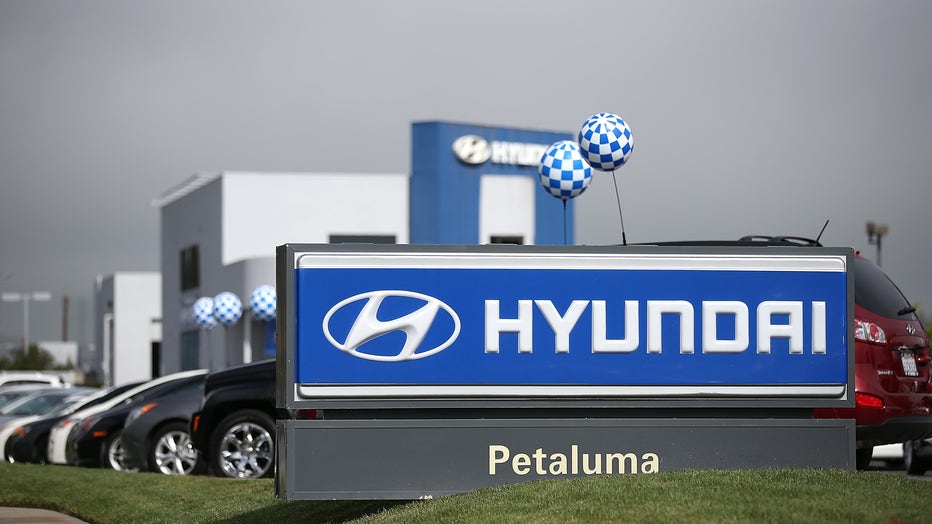 In November, Hyundai issued a new recall for more than 44,000 SUVs in the United States due to a risk of fire and urged drivers to park the vehicles outside until they’re repaired.

The recall involved certain 2018 Santa Fe Sport models, which have anti-lock brake computers that can malfunction and develop an electrical short. This can cause too much electricity in the computer, increasing the risk of a fire while parked or driving,

In November, Tesla recalled more than 300,000 vehicles in the U.S. because a software glitch can make taillights go off intermittently, increasing the risk of a collision.

Tesla said the glitch may affect one or both taillights on certain Model 3 and Model Y vehicles. Brake lamps, backup lamps and turn signal lamps are not affected by the software problem, the company said. 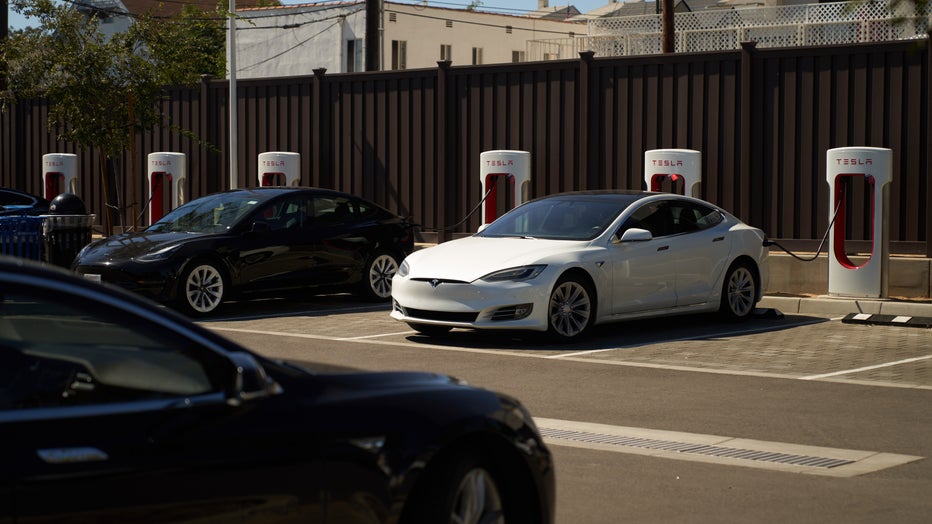 Tesla vehicles are plugged into Tesla charging stations in a parking lot on September 22, 2022 in Santa Monica, California. Tesla is recalling over 1 million vehicles in the U.S. because the windows can pinch a persons fingers while being rolled up.

In September, the company voluntarily recalled nearly 1.1 million vehicles because the pinch protection feature on their power door windows may allow them to squeeze too hard before rolling the glass down.

The pinch protection feature is meant to prevent injury to occupant's extremities as a window closes. 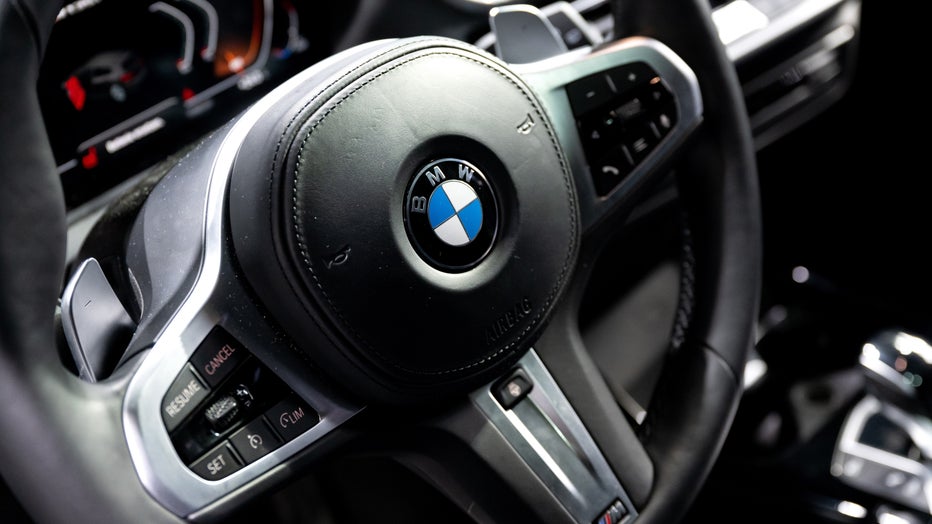 In March, more than 917,000 older BMW cars and SUVs in the U.S. were recalled — many for a third time — to fix an electrical short that can cause engine compartment fires.

Most of the cars were recalled in 2017 and 2019 for the same problem. Documents posted online said owners who previously have their vehicles repaired under the prior recalls will need to come back for a new fix.