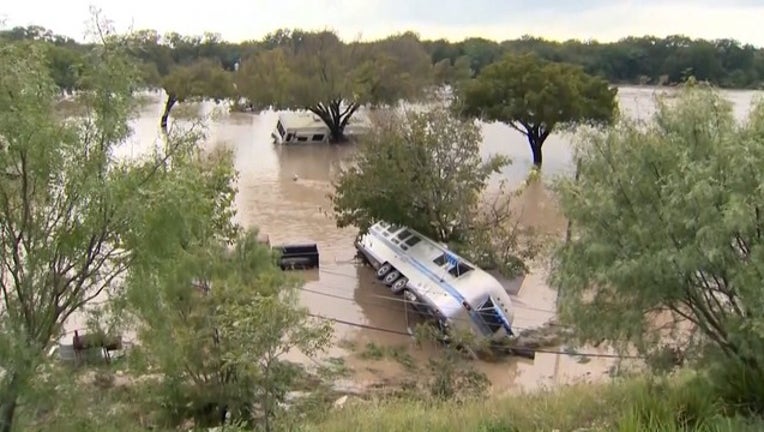 LLANO, Texas (AP) - The Latest on flooding in Texas (all times local):

Authorities say a woman's body has been found at a low-water crossing in a Central Texas city inundated by floodwaters from the Llano River.

Officials say the body was recovered in Llano Tuesday night. Llano County Judge Mary Cunningham says the woman's family has been notified but her that name isn't yet being released.

Water levels on the Llano River are now dropping but had soared above flood stage this week, destroying a bridge, forcing evacuations and leading to water rescues.

Earlier Tuesday, another body was found in Lake Lyndon B. Johnson, about 30 miles (50 kilometers) southeast of Llano. The lake is situated where the Llano River flows into the Colorado River. That body has not been identified.

Water levels are quickly dropping on a Texas river that soared above flood stage this week, destroying a bridge, forcing evacuations and leading to multiple water rescues.

The Llano River was just below 15 feet (4.5 meters) on Wednesday morning after cresting 24 hours earlier at almost 40 feet (12 meters). Initially, forecasters expected the river to rise to near-record levels Thursday, but modified their forecast to show the river dropping below flood stage instead.

Emergency managers in Llano County, about 65 miles (105 kilometers) northwest of Austin, welcome the forecast but say it's not yet safe for residents to return home.

In Kingsland, video captured a bridge crumbling as it was overrun by floodwaters, while a body was found in nearby Lake Lyndon B. Johnson.