Blue Alert explained: How the alert system is used here in Texas

Most Texans got the Blue Alert on their phone Wednesday afternoon when deputies were still hunting down Kaila Sullivan's accused killer, but many had never heard of that type of alert.

After a statewide search, police caught the man accused of killing a Nassau Bay police sergeant.

They found him at a home in Houston Thursday afternoon.

His mother was also detained by officers.

Most Texans got the Blue Alert on their phone Wednesday afternoon when deputies were still hunting down Kaila Sullivan's accused killer, but many had never heard of that type of alert.

As part of the Texas Statewide Alert System, there are a half dozen alert categories for statewide electronic dissemination in Texas.

The Blue Alert has been in place in Texas since 2008 through an executive order signed by then Governor Rick Perry.

Cell phones and social media lit up just after 3 p.m. Wednesday with something many had never seen before, an alert about a cop killer suspect, called a Blue Alert. 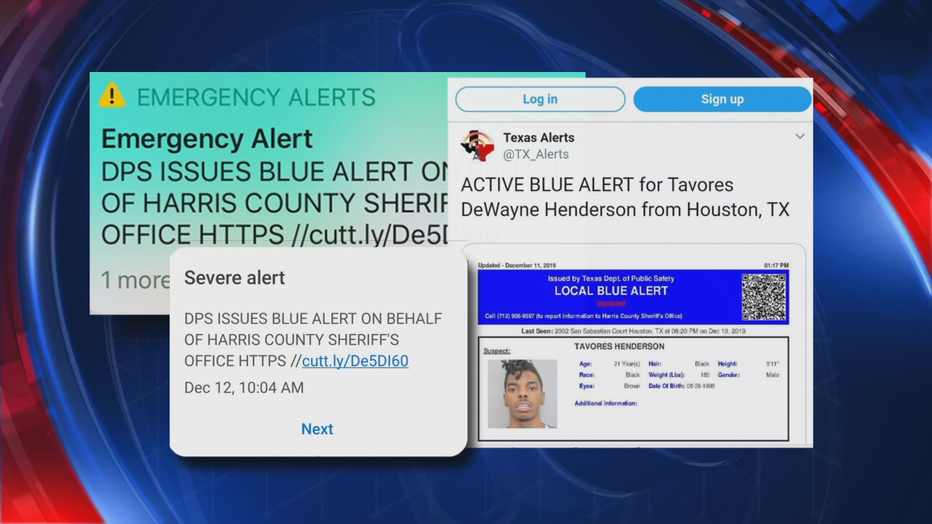 The killing of Nassau Bay PD Sergeant Kaila Sullivan outside Houston, and a suspect who was on the run, is what moved the Department of Public Safety to initiate the Blue Alert, which can be used when a violent act has been committed against a police officer or member of law enforcement at any level.

“We haven't used it, that I’m aware of, in the state, but what it does is it supplies information to everyone just like an Amber Alert,” Miller explained.

There are six concerns that have alerts tailored for DPS to push electronically.

The Clear Alert assists law enforcement in locating and rescuing missing, kidnapped, or abducted adults, or adults who are in immediate danger, while the Camo Alert is designed to help find missing military, retired and active.

“We want to make certain that when we have those type of situations, that we alert people in the entire regions. If it’s in North, Central Texas, or whatever region of the state it’s in,” said State Senator Royce West.

“And to let the community know, the way we did with this most recent Blue Alert, I think was fantastic,” Miller said.

Texas is not the only state with Blue Alerts, as 35 others have Blue Alert notification plans.

The Department of Justice launched a nationwide Blue Alert system in 2015.