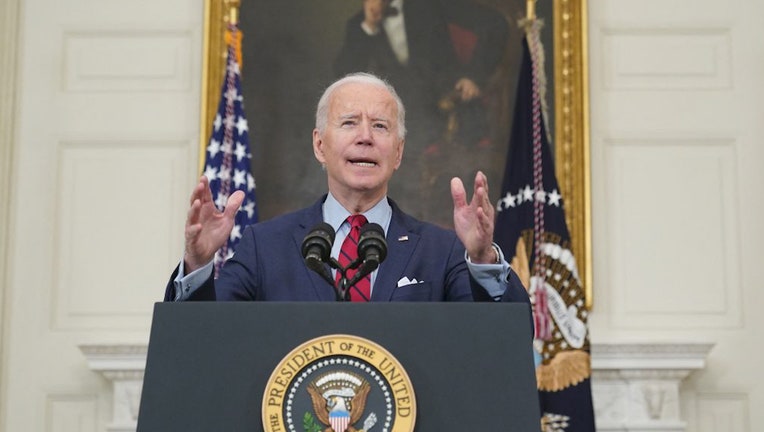 FILE - US President Joe Biden speaks about the Colorado shootings in the State Dining Room of the White House in Washington, DC, on March 23, 2021.

WASHINGTON - President Joe Biden announced Tuesday broad actions by the White House to address the rise in anti-Asian violence in the U.S. and bias against Asian communities.

"Too many Asian Americans have been walking up and down the streets and worrying, waking up each morning the past year feeling their safety and the safety of their loved ones are at stake," Biden said in a statement. "They’ve been attacked, blamed, scapegoated, and harassed. They’ve been verbally assaulted, physically assaulted, killed..."

Biden said he will also appoint a permanent director to lead the initiative.

The Department of Health and Human Services will allocate $49.5 million from the American Rescue Plan to a new program for survivors of domestic violence and sexual assault who have difficulty speaking English. This program will extend its services to Asian American, Native Hawaiian, and Pacific Islander communities.

A COVID-19 Equity Task Force committee will be established to address xenophobia against Asian Americans. The task force is charged with making recommendations to the president to eliminate racial inequities when it comes to resources in combating the COVID-19 pandemic.

‘Don’t lose sight of who the victims are’: Podcaster on how Atlanta attacks shine light on Anti-Asian American violence

Host of 'Culture Chat' podcast, Mimi Chan, noticed a recent rise in violence at the beginning of the COVID-19 pandemic. She speaks with NewsNOW's Regina Gonzalez about her research.

The task force has already established a subcommittee on Structural Drivers of Health Inequity and Xenophobia. The subcommittee will provide recommendations to the White House to ensure the country’s COVID-19 response doesn’t discriminate against the AAPI community.

The Department of Justice will also take steps in combating anti-Asian American violence, including having its civil rights division increase community outreach, awareness and education to find any gaps in hate crime reporting.

The FBI will launch a new interactive hate crime website, which will highlight reports of anti-Asian hate crimes. The agency will also add a training tool in how to respond and report anti-Asian American crimes that will be provided to state and local partners.

The National Endowment for the Humanities is launching a virtual library for educators to explore Asian American history and ongoing challenges of anti-Asian discrimination and racism in the United States.

The National Science Foundation will invest more than $33 million in research grants to understand, address, and end bias, discrimination and xenophobia against AAPI communities.

Biden’s broad initiative comes amid a growing disturbing trend of violence against Asian and Pacific Islander communities in the U.S.

On Monday, A 65-year-old Asian woman was kicked in the stomach and repeatedly stomped on as building workers in Hell's Kitchen stood by, said the NYPD, according to FOX 5. That same day, a video appeared on social media showing a suspect relentlessly punching an Asian man in the head on a subway train. The beating continued even when the victim curled up into a fetal position. With each blow to the head, the victim's body could be seen convulsing.

On March 16, a gunman opened fire at three Atlanta-area massage businesses. Eight people were killed. Six of them were Asian women. Police have charged a 21-year-old man in the slayings.

Thousands of Asian Americans and Pacific Islanders turned to social media to air their anger, sadness, fear and hopelessness. The hashtag #StopAsianHate was a top trending topic on Twitter hours after the shootings.

The next day, a 75-year old Asian woman was attacked but was able to fight off the man who struck her in San Francisco.

The president previously announced that it is his administration’s official policy to condemn anti-Asian bias and violence. He also called on Congress to quickly pass the COVID-19 Hate Crimes Act.

In addition to Biden’s efforts, U.S. Attorney General Merrick Garland announced a 30-day expedited review to determine how the DOJ can better handle anti-Asian crimes. His goals include improving the department’s tracking of reported hate crimes and prioritizing criminal investigations.

Garland also wants each of the U.S. attorneys to have tools and resources dedicated to prosecuting violence including funding, technology and linguistic tools.

"The recent rise in hate crimes and hate incidents, particularly the disturbing trend in reports of violence against members of the Asian American and Pacific Islander community since the start of the pandemic, requires renewed energy and emphasis on investigation and prosecution," he said in a statement to FOX Television Stations.