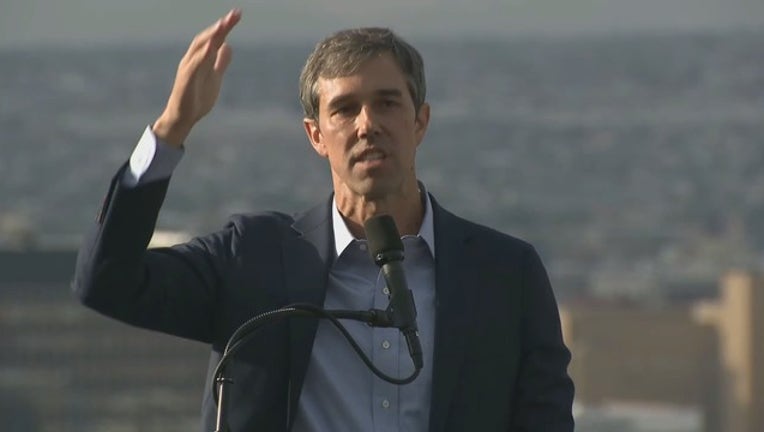 Democrat Beto O'Rourke rejoined the presidential race on Thursday nearly two weeks after a mass shooting in his Texas hometown, using a speech in his grieving city to try to overhaul his White House bid and argue that President Donald Trump is morally unfit for a second term.

The former congressman spoke at a park close to his home, saying that what happened in El Paso, on the U.S.-Mexico border, "is an attack on America" and "an attack on our ideal of what America can be."

He blamed assault weapons and endorsed a federal buyback program for them, but was far more critical of the president for what he called fomenting hate and racist attitudes.

"We must take the fight directly to the source of this problem, that person who has caused this pain and placed this country in this moment of peril, and that is Donald Trump," O'Rourke said during an emotional, 30-plus-minute address. "I want to be the leader for this country that we need right now and that we do not have."

O'Rourke said the dual dangers of Trump and a glut of assault weapons on the nation's streets must be addressed: "I'm confident that, if at this moment we do not wake up to this threat, then we, as a country, will die in our sleep."

Aides say the next phase of O'Rourke's campaign won't simply focus on plodding through states that vote early in the presidential primary, like Iowa, which goes first, but will instead feature their candidate drawing more sharp contrasts between himself and Trump.

O'Rourke will start Friday by heading to Mississippi, where federal immigration agents last week arrested 680 Latino workers in a massive workplace sting at seven chicken processing plants, shocking their communities. After Trump took office, the acting director of U.S. Immigration and Custom Enforcement said the agency would try to increase crackdowns at worksites believed to be employing people in the country illegally, like the Mississippi plants, by 400%.

O'Rourke was campaigning in Nevada on Aug. 3 when a gunman who denounced immigrants in an online screed opened fire at an El Paso Walmart, killing 22 people. He suspended his campaign and rushed home. Since then, he has attended funerals and vigils, visited hospitalized victims and donated blood while appearing on national television to say Trump's rhetoric helped cause the shooting - and to chide the media for not more expressly reporting that.

During that time, O'Rourke stopped sending emails to supporters asking for donations and pulled online fundraising ads, though he still accepted money via his campaign's website.

He now says he'll return to the campaign trail using a better way to woo voters than normal staples like visiting state fairs for "corndogs and Ferris wheels." Instead, O'Rourke will travel to "those places where Donald Trump has been terrorizing and terrifying and demeaning our fellow Americans."

"That's where you will find me in this campaign," he said.

O'Rourke also used his Thursday speech to declare that he wouldn't leave the presidential race to challenge Republican Sen. John Cornyn next year. He said "that would not be good enough" for El Paso and its shooting victims, since only taking on Trump will do.

"O'Rourke's second campaign reboot is likely to end up failing just like his first," Trump campaign spokeswoman Samantha Cotton said in a statement.

O'Rourke had attempted a major strategy shift in recent months, increasing his television appearances and releasing a string of policy proposals, attempting to show he didn't prioritize political style over substance. Those efforts failed to recapture the strong buzz and fundraising O'Rourke had upon entering the presidential race in March, though, and he's remained plagued by low fundraising and polling ever since.

Last weekend, nearly the entire packed field of Democratic presidential candidates visited the state fair and other locales in Iowa, whose caucuses are now less than six months away. O'Rourke is betting that kind of personal facetime won't be necessary, as he heads elsewhere "to remind this country just who we are at our best."

"Anyone that this president puts down," he said, "we are going to do our best to lift up."