Brandino Hutson loves the Houston Astros so much, he spent an estimated $50 thousand dollars on custom fan gear.

HOUSTON - One Astros fan in the Houston Heights has invested tens of thousands of dollars in his love for the team. Brandino Hutson loves the Houston Astros so much, he spent an estimated $50 thousand on custom fan gear.

Hutson hangs a super-sized Astros World Series ring from his neck and wears another one on his hand. 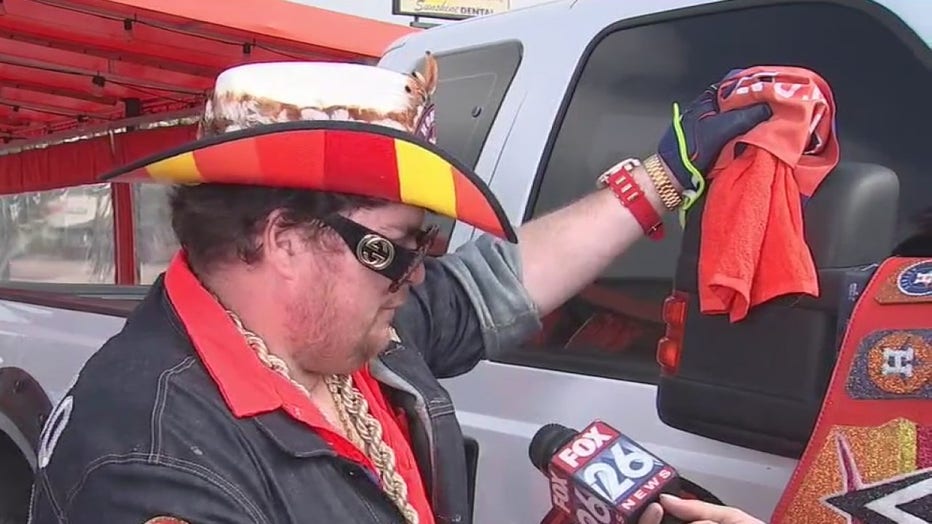 “Josten’s made this,” said Hutson. “They’re the ones that made the players rings.”

“We winning in ‘19, I’m gonna get another one no doubt,” said Hutson of his plans to update his fan gear.

“The jacket is from Carlos Correa’s fianceé, and she hand-made it,” said Hutson of the Sparkle Queens brand jean jacket.

The outfit gets a lot of attention at the games, and he goes to all of them.

His mode of transportation is, of course, the Astros truck.

“It’s just fun,” said Hutson. “Oh, and what’s beautiful is: if you drive a truck like this, everyone shows you respect. They just let you in, and you don’t have to cut anyone off.”

The truck is even pointy-boot accessible, albeit driving with the pointing orange Astros boots can be tricky.

“I’d definitely not recommend that to anybody,” said Hutson.

The word is: the boots carry a certain amount of luck, as does a shirt that Hutson speculates may have contributed to the Astros‘ first World Series win.

“On nights before the game I sleep with my boots on,” said Hutson. “My luckiest shirt I’m saving for Game Seven—I wore that shirt in Game Seven in LA (2017)—if it has to come to that.”

Hutson has been a fan from birth.

“I’ve been a fan for so long,” said Hutson. “Even a couple of seasons ago we were one of the worst teams in the league, and now we’re becoming a dynasty. So now we got it. Now I want more.”