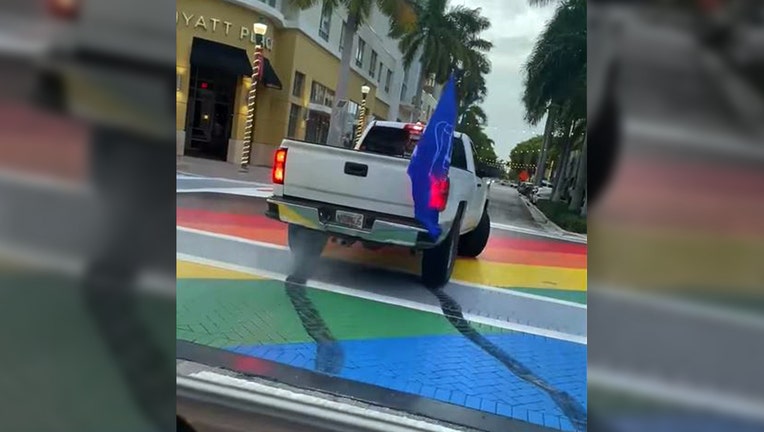 DELRAY BEACH, Fla. - An arrest has been made in the vandalization of a South Florida city's rainbow-colored Pride crosswalk.

A witness captured video of the vandals appearing to intentionally leave 15 feet of skid marks across the streetscape painting, which covers the intersection of NE 1st Street and NE 2nd Avenue.

According to police documents, the video shows a white Chevy truck stopped at the intersection, and then "intentionally accelerated the vehicle in an unreasonable unsafe manner in a short amount of time, commonly referred to as a 'burn out.'"

The truck's tires then skid as the vehicle crossed the oncoming lane, where another vehicle was approaching, the document says.

"The Chevy truck continues to recklessly skid sideways, almost hitting the NW curb to the sidewalk in front of the Hyatt hotel. It should be noted that this intersection is very pedestrian-friendly, and the Hyatt hotel has an open lounge sitting area on that sidewalk corner, which the truck would have collided into if it would have hit the curb," the document says. "The video shows that the driver willfully drove the vehicle with disregard for the safety of any other persons or property."

Police were able to clearly see the truck's license plate and identified the owner as 30-year-old John Edward Jerich, of Lake Worth.

After identifying Jerich, police say another witness came forward. The man said he attended a "President Trump Birthday Rally," which included a driving route through the city, on the day of the alleged vandalism.

The witness said he was in a vehicle that was driving two vehicles in front of the Chevy. 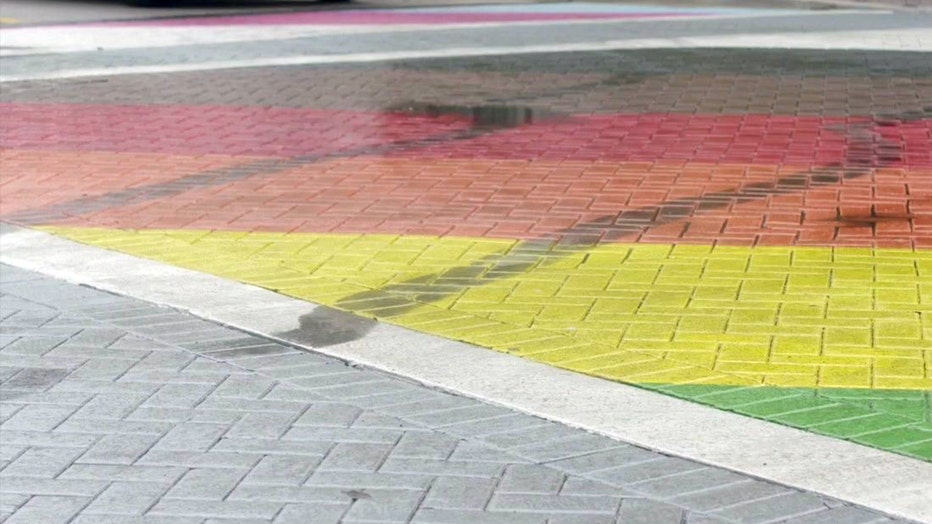 The witness told police he heard a man yell something to the effect of, "Adam, tear up that gay intersection," according to police documents. The witness said he turned around and saw the driver of the Chevy and described him as a white male in his early 20s, with blonde, shoulder-length, curly hair. He described the vehicle to have a blue "Trump" flag that was leaning off the tailgate. The witness later identified Jerich in a photo lineup.

The witness said the vandalism affected him and felt he had to come forward, not only as a community member but as a gay man, the police documents state.

The vendor who painted the streetscape, which cost $16,720, tried to clean the tire marks from the street but the damage was too extensive. 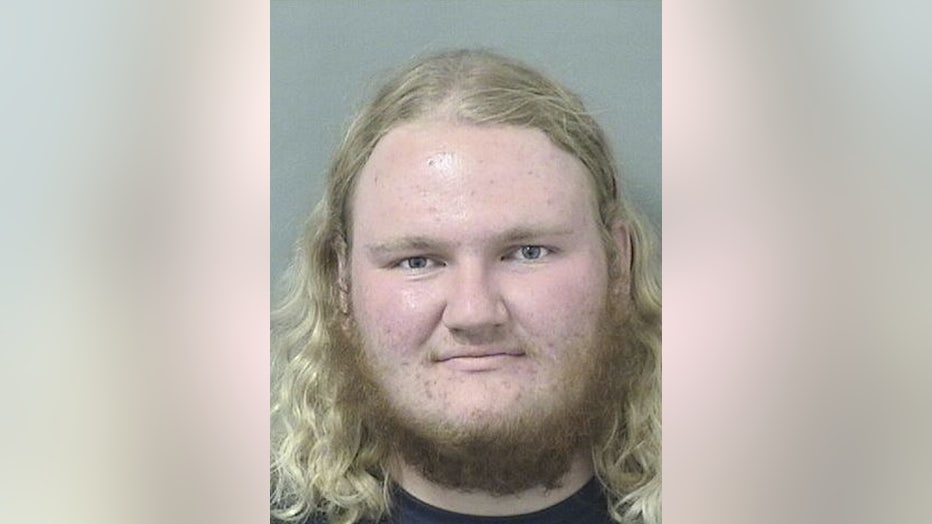 "It should be noted that since the act of vandalism, an outcry from the Delray Beach community has occurred to show support against the crime and to rally with the LGBTQ community, through the calls to the DBPD and posts on social media and news media," the police documents note.

Alexander Michael Jerich, 19, faces charges of criminal mischief ($1,000 or more), reckless driving with property damage, and evidence of prejudice, which elevates the crime to a felony.