Some brave souls went out to Amon G. Carter Stadium at the TCU’s campus Thursday night for the Lockheed Martin Armed Forces Bowl between the Air Force and Baylor.

FORT WORTH, Texas - Some brave souls went out to Amon G. Carter Stadium at the TCU’s campus Thursday night for the Lockheed Martin Armed Forces Bowl between the Air Force and Baylor.

Tailgating was canceled, as well as other pre-game events, due to the weather.

But fans, traveling from as far as Canada, wore as many layers as they could, brought out the blankets, ordered hot chocolate, and made the best of it.

Fans at the Armed Forces Bowl earned their die-hard status.

At kickoff, it was 13 degrees, but the windchill made it feel like -4.

Most years, Fort Worth is a good location for a bowl game in December, but not when an arctic blast makes its way through.

"We are definitely not used to this. I got my ski boots on," Baylor grad Fayneshia Dunn said.

With temperatures below freezing, the Lockheed Martin Armed Forces Bowl may as well have been held in Green Bay, rather than the Amon G. Carter Stadium TCU’s campus.

"I immediately had regrets, but no we are die-hard fans. Cold or warm, we are here," Baylor fan Kelly Kleppelid said.

The game went on, with temperatures in the teens, but other pre-game events were cancelled, including the tailgate outpost and the veteran’s village. 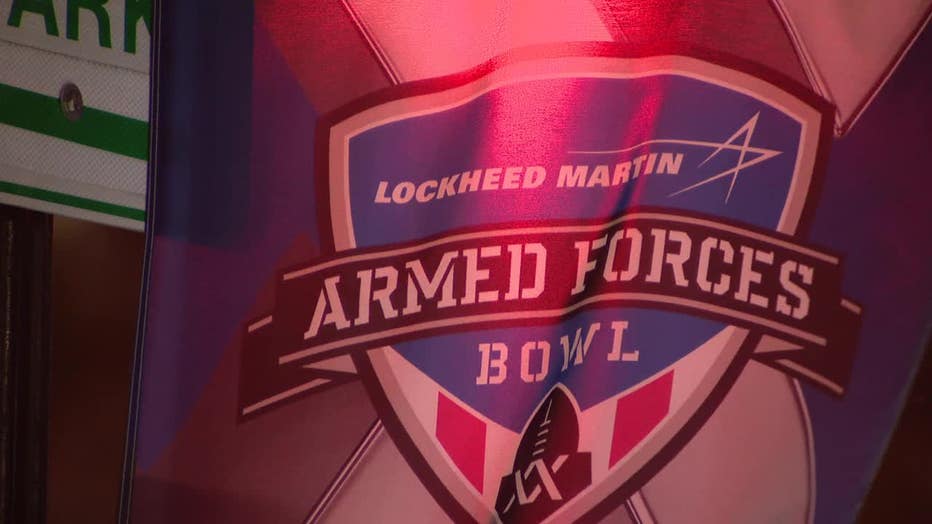 At Thursday night’s game, fans were encouraged to bring blankets, and many of them did.

Billy Wilson had a leg up on the majority Baylor crowd, as he graduated from the Air Force Academy in Colorado.

His sister and father are Baylor alums

"My academy jacket. 20 years old. My hoodie, jersey number on the back. I’m ready," he said.

A popular item at the stadium was hot chocolate

Clint Graville and his son, Kale, are in from Canada while visiting family.

It’s definitely warmer in Fort Worth than Alberta, where temperatures are in the negative teens, but it’s not the kind of warm they were expecting.

"I didn’t even bring sweaters or anything. Shorts and golf clubs. We didn’t plan this out," Graville said.

For Dunn, this weather wasn’t going to stop her from making it to the game, and hopefully winning a bet.

"The cold bowl, yes. But it’s the family bowl. He owes me dinner if we win," she said.