FORT WORTH, Texas - Tulane beat Southern Miss in the Lockheed Martin Armed Forces Bowl on Saturday, but it was more than just football in Fort Worth. It was a tribute to military members.

Many showed up well before the game to thank them for their service.

The tailgate ahead of the Armed Forces Bowl was a mix of school spirit and the spirit of patriotism.

A game which is played in their honor.

"We really appreciate the sacrifice of what they've done for us, for us to be here today," Dave Akins said.

For many service members, this is an annual tradition.

"It's more of a comradeship for the military,” said former Marine Master Sgt. Christopher Hayes. “All of us get together and enjoy the atmosphere. Meeting up with some of our old friends and family. A lot of us have served in the military for several years, so a lot of retired folks come out and enjoy themselves."

Besides the typical tailgate food and music, there were many tributes to the military. 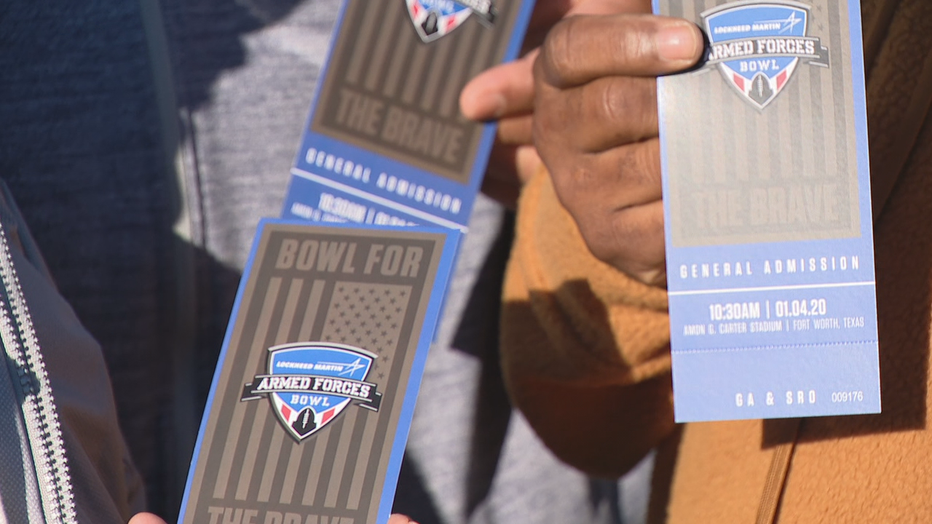 People didn’t just get to learn about the military and our nation's history, they got to see it up close.

The Fort Worth Vet Center helps those dealing with combat trauma.

"We can help get them into counseling, help talk about those thoughts that they're having nightmares about. And the spouse sees it in us, before we see it in ourselves," said James Jones, with the Fort Worth Vet Center.

The Sons of the American Revolution Fort Worth chapter is a non-profit that values American freedom, patriotism, and our national symbols.

They shared those values with the younger generation.

“That's our future of our country,” Ron Turner said. “So if we can instill in them a respect for the flag and the love for the flag, that's wonderful. That's our goal."