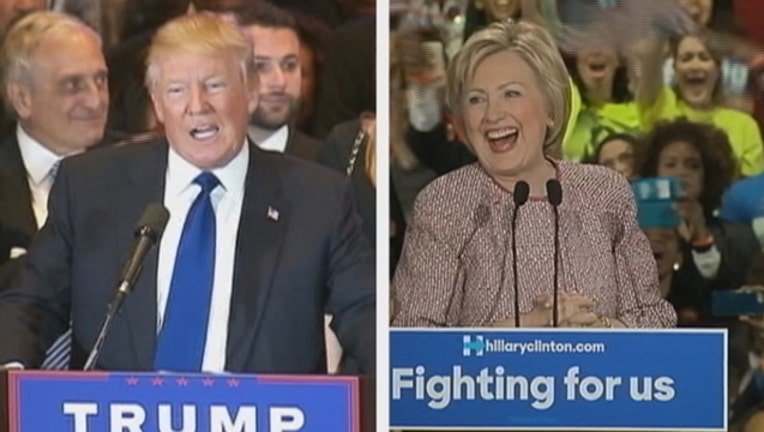 WASHINGTON (AP) — Despite signs of a tightening national presidential race, Hillary Clinton still appears to have an advantage in enough states to give her an Electoral College victory. It's an edge that could still change as advance voting gets underway in earnest and in the seven weeks until Election Day.

That's according to an Associated Press analysis of the map as it stands today. The analysis considers preference polling, recent electoral history, demographic trends and campaign priorities such as advertising, travel and on-the-ground staff.

In some states now listed as toss-ups, the most recent preference polls suggest that Trump might be gaining. One Iowa survey, conducted by Monmouth University, indicates the GOP nominee may be opening a lead there, though previous polls indicated a tight race. Several polls released last week suggest Ohio may be tilting toward Trump, but the state is a perpetually close battleground and remains contested by both campaigns.

Although some national polls continue to show a Clinton advantage, most now indicate a closely fought race.

The AP this week moves Maine's 2nd Congressional District to a toss-up amid the close race nationally and demographics that appear to favor Trump. Exit polls conducted in 2012 showed a majority of voters in the district were whites without a college degree, a group that has favored the Republican nominee by large margins in polls conducted nationally.

Want to chart your own path along the Road to 270? Figure out how Donald Trump or Hillary Clinton can get the Electoral College votes they'll need to win the White House with AP's interactive map: http://elections.ap.org/content/road-270-0