LONDON - An American cancer survivor has succeeded in her remarkable quest to swim across the English Channel four times in a row.

Sarah Thomas, who is from Colorado, completed the feat Tuesday morning after more than 54 hours of swimming.

“Yes, I'm scared. The Channel can do a lot of crazy things and for this to happen, we're going to need some luck,” Thomas wrote Saturday on Facebook prior to her swim. “But, hopefully between the preparation I've done and the experience of my crew and boat captain, we can get this done together.”

She was cheered by a small crowd as she arrived in Dover. She was given champagne and chocolate to celebrate.

Thomas says she was "a little sick" after so much time in the water and thanked her husband and supporters for urging her to keep going.

She has dedicated the swim to "all the survivors out there."

Thomas was diagnosed with breast cancer in 2017, according to KUSA-TV in Denver. 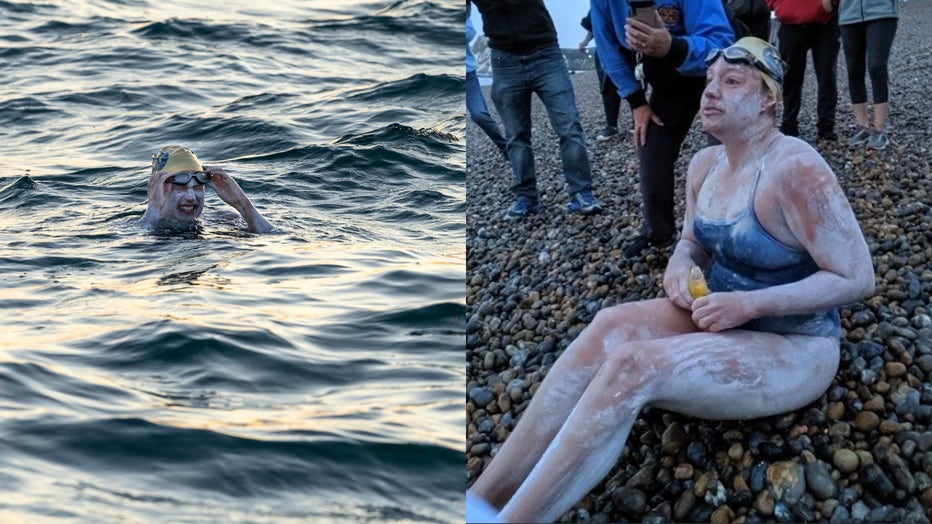 Sarah Thomas is pictured during her swim across the English Channel four times nonstop, alongside an image of her after completing the marathon swim. (Photo credit: Jon Washer)

“I just randomly felt a lump in my breast,” she said in a 2018 interview with KUSA. “I still had one swim left in the season and I didn’t want to admit to myself that I thought something was wrong.”

Doctors confirmed her suspicions and she was diagnosed at age 35 while at the top of her swimming game, according to the news station.

“I was feeling strong, I hadn’t had any injuries and I just really felt like I was prepared to take on the world,” Thomas said. “When you get a diagnosis of cancer you have to reevaluate everything you’ve ever wanted to do.”

She underwent surgery, chemotherapy and radiation and kept her goal of swimming the channel as motivation, according to the station.

Thomas swam competitively in high school and college, and later began open water swimming, according to her biography. She has since set a distance record of 80 miles in 56 hours nonstop across Lake Powell, became the first person to cross Flathead Lake in Montana and had a successful crossing of Loch Ness — among other accomplishments in the sport.