NASHVILLE, Tenn. - A traditional day of celebration turned into one of protest Friday, as Americans marked Juneteenth, a holiday that long commemorated the emancipation of enslaved African Americans but that burst into the national conversation this year after widespread demonstrations against police brutality and racism.

In addition to the traditional cookouts and readings of the Emancipation Proclamation — the Civil War-era order that declared all slaves free in Confederate territory — Americans were marching, holding sit-ins or car caravan protests to demand racial justice and police reform.

RELATED: For 155 years, African Americans have celebrated independence on Juneteenth

In Nashville, Tennessee, about two dozen black men, most wearing suits, quietly stood arm in arm Friday morning in front of the building that houses the city’s criminal courts. Behind them was a statue of Justice Adolpho Birch, the first African American to serve as chief justice of the Tennessee Supreme Court.

“If you were uncomfortable standing out here in a suit, imagine how you would feel with a knee to your neck,” said Phillip McGee, one of the demonstrators, referring to George Floyd, a black man who died after a white Minneapolis police officer pressed a knee into his neck for several minutes. The killing has sparked weeks of sustained, nationwide protest.

RELATED: These companies are observing Juneteenth as a holiday

Former President Abraham Lincoln first issued the Emancipation Proclamation on Sept. 22, 1862, and it became effective the following Jan. 1. But it wasn’t enforced in many places until after the end of the Civil War in April 1865. Word didn’t reach the last enslaved black people until June 19 of that year, when Union soldiers brought the news of freedom to Galveston, Texas.

Most states and the District of Columbia now recognize Juneteenth, which is a blend of the words June and 19th, as a state holiday or day of recognition, like Flag Day. But in the wake of protests of Floyd's killing this year, many more Americans — especially white Americans — are becoming familiar with the holiday and commemorating it. 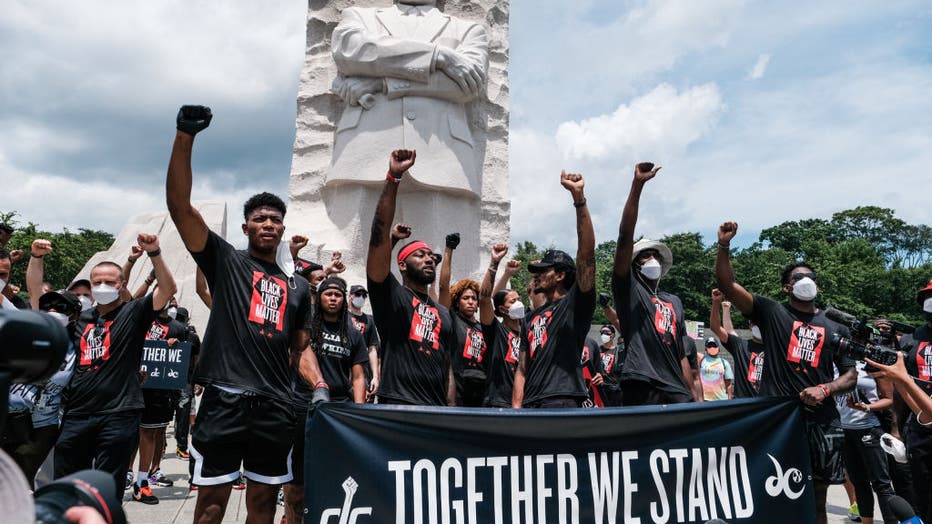 Members of the Washington Wizards and Washington Mystics basketball teams rally at the MLK Memorial to support Black Lives Matter and to mark the liberation of slavery on June 19, 2020 in Washington, D.C. (Photo by Michael A. McCoy/Getty Images)

Events were expected to be held in every major American city on Friday. Numerous events were planned in and around Boston, including a rally organized by Black Lives Matter to call for an end to “mass incarceration and over-policing” of communities of color, and a labor union-organized automobile caravan as part of the nationwide Drive to Justice campaign, which seeks changes in policing and other measures.

RELATED: 120 years later, 'Lift Every Voice and Sing' still rings through the halls where it was first performed

‘Lift Every Voice and Sing:’ The ‘Black National Anthem’

“Lift Every Voice and Sing” began as a poem written by a school principal. It grew to become known as the “Black National Anthem.”

In Wisconsin, a Juneteenth flag was raised early Friday morning for the first time over the state Capitol in Madison, and an all-day celebration was planned for the first time in Green Bay, featuring games, speakers and performances. Milwaukee was hosting a sit-in and solidarity march.

Young people were planning to lead a march on the Rhode Island Statehouse in Providence on Friday afternoon to call for “defunding” the police and investing in the black community.

President Donald Trump issued a presidential message for Juneteenth in which he noted “the unimaginable injustice of slavery and the incomparable joy that must have attended emancipation.”

“It is both a remembrance of a blight on our history and a celebration of our Nation’s unsurpassed ability to triumph over darkness,” Trump added.

Trump had originally been scheduled to speak in Tulsa, Oklahoma, Friday, but changed the date amid an uproar about his appearance on a date of such significance. Protesters have been gathering at the venue this week ahead of his appearance.

South Dakota's Republican Gov. Kristi Noem proclaimed Friday as Juneteenth Day, but the proclamation does not make the day a state-recognized holiday.