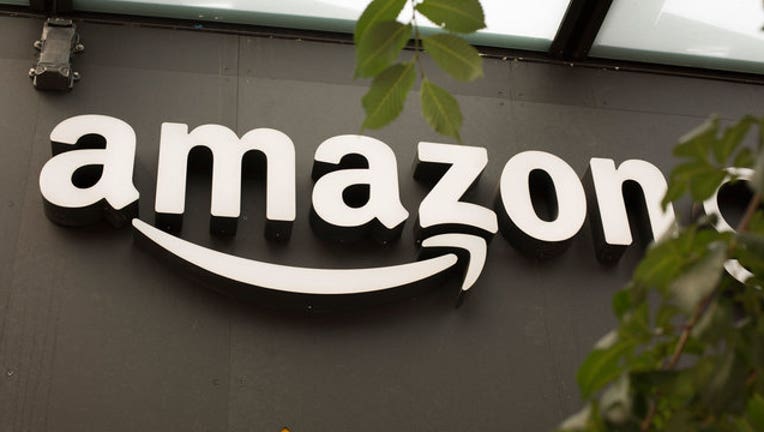 A portion of the sign advertising Amazon Go is seen outside the grocery store's location on June 16, 2017 in Seattle, Washington. (Photo by David Ryder/Getty Images)

NEW YORK (AP) - After a yearlong search for a second home, Amazon is now reportedly looking to build offices in two cities instead of one, a surprise move that could still have a major impact on the communities it ultimately selects.

One of the areas the online retail giant is considering is New York's Long Island City, according to a source familiar with the talks. The neighborhood, across the East River from Manhattan, is fast-changing, where many high-rise towers have replaced empty warehouses.

New York Gov. Andrew Cuomo met two weeks ago with Amazon officials in his New York City offices, according to the source, who was not authorized to discuss the negotiations and spoke on condition of anonymity. The source said Cuomo offered to travel to Amazon's Seattle hometown to continue talks.

Cuomo told reporters Tuesday that winning over Amazon would give an economic boost to the entire state. He also joked that he was willing to change his name to "Amazon Cuomo" to lure the company.

In addition to Long Island City, The New York Times reported Monday that Amazon is also finalizing a deal to locate to the Crystal City section of Arlington, Virginia, just outside Washington, D.C. The Wall Street Journal, which was first to report the plan to split the headquarters between two cities, said Dallas is also still a possibility. Both newspapers cited unnamed people familiar with the decision-making process,

Amazon.com Inc., which has said it plans to make a final decision before the end of the year, has declined to comment on the reports.

There's been intense competition to win over Amazon, with some throwing billions in tax incentives to the company. Amazon kicked off its hunt for a second headquarters in September 2017, initially receiving 238 proposals before narrowing the list to 20 in January.

Long Island City and Crystal City would meet Amazon's requirements for a new locale: Both are near metropolitan areas with more than a million people, have nearby international airports, direct access to mass transit and have room for the company to expand.

Selecting those areas would bring more jobs to areas that already have plenty.

"The speculation that Amazon might choose the D.C. area and New York is a much less radical move than many imagined," said Jed Kolko, the chief economist at job site Indeed, adding that it would be another example of "rich places getting richer."

The company had originally promised to bring 50,000 new high-paying jobs to one location, which founder and CEO Jeff Bezos said would be "a full equal" to its Seattle home base. Amazon may now split those jobs equally between two locations, The Wall Street Journal reported.

Jay Ash, the economic development chief in Massachusetts, said Tuesday that he's had "no recent contact" with Amazon about a headquarters in Boston, but his office is still talking with the company about other opportunities. Earlier this year, Amazon unveiled plans for an office expansion in Boston's Seaport District, promising 2,000 new technology jobs by 2021 in fields including machine learning and robotics.

Amazon has said it could spend more than $5 billion on the new headquarters over the next 17 years, about matching the size of its current home in Seattle, which has 33 buildings, 23 restaurants and 40,000 employees.

The company already employs 600,000. That's expected to increase as it builds more warehouses across the country to keep up with online orders. Amazon recently announced that it would pay all its workers at least $15 an hour, but the employees at its second headquarters will be paid a lot more - an average of more than $100,000 a year.

Earlier this month, Bezos said during an on-stage interview in New York that the final decision will come down to intuition.

"You immerse yourself in that data, but then you make that decision with your heart," he said.