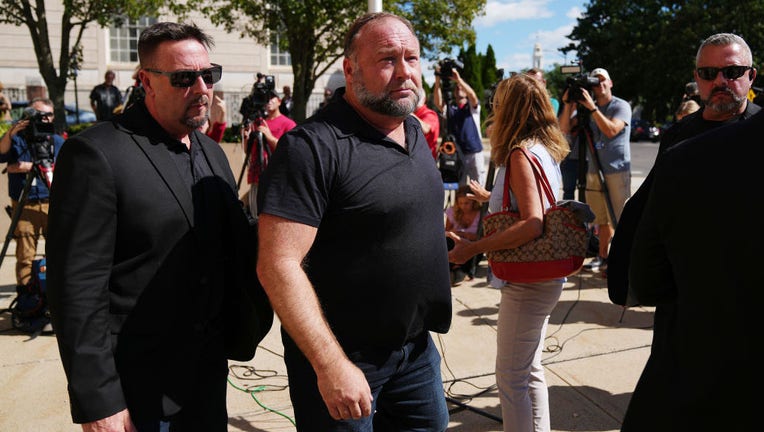 HARTFORD, Conn. (AP) - Conspiracy theorist Alex Jones has asked a Connecticut judge to throw out a nearly $1 billion verdict against him and order a new trial in a lawsuit by Sandy Hook families, who say they were subjected to harassment and threats from Jones' lies about the 2012 Newtown school shooting.

"Additionally, the amount of the compensatory damages award exceeds any rational relationship to the evidence offered at trial," Jones' lawyers, Norm Pattis and Kevin Smith, wrote in the motion.

Christopher Mattei, a lawyer for the 15 plaintiffs in the lawsuit against Jones, declined to comment on the filing Saturday, but said he and other attorneys for the Sandy Hook families will be filing a brief opposing Jones' request.

An FBI agent who responded to the shooting and relatives of eight children and adults killed in the massacre sued Jones for defamation and infliction of emotional distress over his pushing the bogus narrative that the shooting was a hoax staged by "crisis actors" to impose more gun control.

Six jurors in Waterbury, Connecticut, ordered Jones and his company, Free Speech Systems, on Oct. 12 to pay $965 million in compensatory damages to the plaintiffs and said punitive damages also should be awarded. Bellis has scheduled hearings for early next month to determine the amount of the punitive damages.

During the trial, victims' relatives said in often-emotional testimony that they were threatened and harassed for years by people who believed the lies told on Jones’ show. Strangers showed up at the families’ homes to record them and confronted them in public. People hurled abusive comments on social media. Relatives said they received death and rape threats.

The verdicts came after another jury in Texas in August ordered Jones and his company to pay nearly $50 million in damages to the parents of another slain Sandy Hook child. A third trial over the hoax claims, involving two more Sandy Hook parents, is expected to be held near the end of the year in Texas.

Jones, who has acknowledged in recent years that the shooting did occur, has blasted the lawsuits and trials on his Austin, Texas-based Infowars show, calling them unfair and a violation of his free speech rights.

But he lost his right to present those defenses when the judges in Connecticut and Texas found him liable for damages by default without trials, for what they called Jones' repeated failures to turn over some evidence including financial documents and website analytics to the Sandy Hook lawyers.

With liability already established, the trials in both states focused only on how much Jones should pay in damages.

Pattis, Jones' lawyer, wrote in the motions filed Friday that there was a lack of evidence directly connecting Jones with the people who harassed and threatened the Sandy Hook families. Pattis said the trial resembled a "memorial service, not a trial."

"Yes, the families in this case suffered horribly as a result of the murder of their children," Pattis wrote, adding that Jones did not send people to harass and threaten the families.

"There was no competent evidence offered at this trial that he ever did," he wrote. "Instead, there was a shocking abuse of a disciplinary default and its transformation into a series of half-truths that misled a jury and resulted in substantial injustice."