A Plano couple came very close to disaster after an airborne lawnmower blade smashed into their windshield.

DALLAS - A Plano couple came very close to disaster after an airborne lawnmower blade smashed into their windshield.

It was in the middle of the day right on 635 in North Dallas when a car in front of them ran over a lawnmower blade, forcing the Plano couple to react to a life or death situation on the freeway.

Lauren Drum says she had one second to make a decision when their front windshield instantly shattered.

"I kind of ducked because that is what was my automatic reaction," she recalled. "And that is what saved my life."

A 20-inch lawnmower blade sliced straight through the glass. 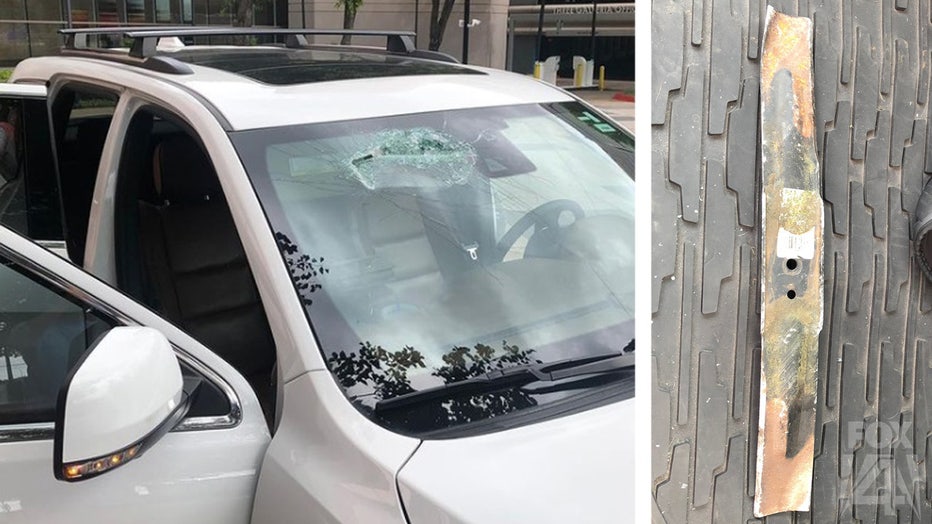 Drum’s husband tried to swerve, causing the blade to also pierce the passenger side window.

"This person in front of us hit that mower blade and it launched into our car," she said. "And we miraculously came out alive."

But Drum says their Saturday morning started off normal. She and her husband were driving west on 635 near the galleria headed to Irving.

"Now it’s really setting in that something terrible could’ve happened that day," she said.

The couple immediately pulled over to take a breather. The blade was sitting in between Drum’s seat and her door. Glass shards traveled all the way to the trunk. The only injuries were a few scratches.

Neither of them say they noticed the blade in the road but call themselves lucky.

But in Drum’s case, it was a blade. It’s a souvenir she says she kept to remind her of the danger she dodged.

"It might be kind of interesting relic to remember that day and remember how we got away with our lives that day," she said.

TxDOT says it works with contractors and law enforcement to continue to pick up debris on Texas roadways day and night.

If you see debris on the roadways, you are urged to report it to TxDOT.