After night of vandalism and looting, peaceful protest held in Arlington Tuesday

The city of Arlington decided it would not issue a curfew despite violence, vandalism and looting in the city overnight.

ARLINGTON, Texas - The city of Arlington decided it would not issue a curfew despite violence, vandalism and looting in the city overnight.

Peaceful protest marches were held there Tuesday with police saying everything was under control.

Powerful words chanted in a unified voice in Arlington Tuesday. At the corner of Abram and Center streets in Arlington, a gathering spot for Texans to express their anger over the death of George Floyd.

The afternoon protest attracted a large, diverse crowd. All of them were outraged by what they say are on-going examples of police brutality nationwide.

“How else are we supposed to get our message out without peacefully protesting?” said Chenoa Turner.

Nicodenus Turner was emotional over the show of support at this rally by people who don't look like him but care just the same. 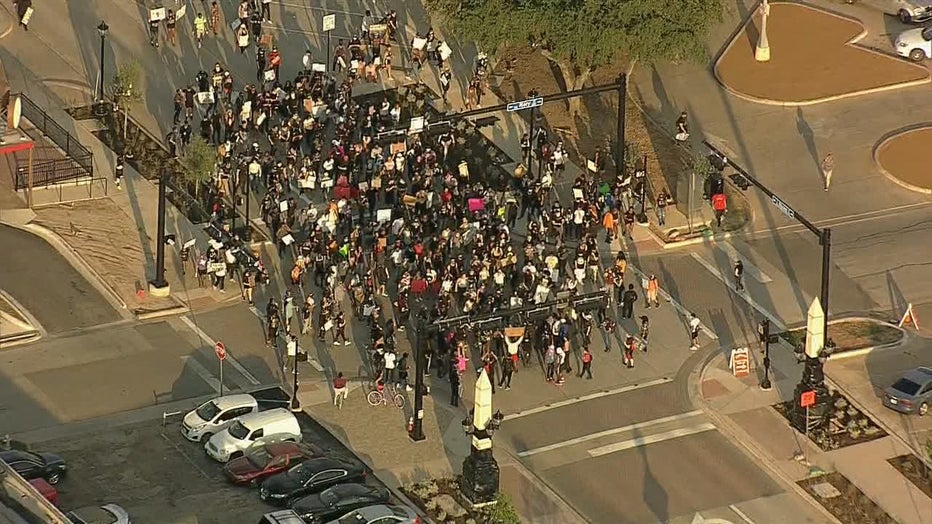 “Honestly, I think America has a chance,” he said. “It’s honestly heartwarming to see all these different ethnicities and different people out here to try to fight for our cause I love everyone thank you so much.”

“To me, seeing him stand up for something has been the most heartwarming thing that could ever happen to me,” she said.

Tuesday's peaceful protest and march was in stark contrast to an attack on the city and some Arlington police officers Monday night.

A small group of charged a police cruiser, damaging the windshield and marked it with spray paint. The police department was vandalized. Artwork was damaged. Retail stores were also targeted.

“I want to remind people the vast majority of people who came out were peaceful,” said Arlington Police Lt. Chris Cook.

And peaceful protesters at Tuesday’s rally refuse to let those so-called agitators define them or distract from the issue that's struck a nerve with countless Americans all across the country.

At the end of the march, organizers encouraged the group, made up largely of college students, to get out and vote. No one had to be detained or arrested.