More than three-dozen recruits were sworn-in as new Dallas police officers on Friday.

A total of 41 cadets from different life paths will now protect and serve the people of Dallas.

“A police department is about partnership with the community. It is dependent upon our trustworthiness and our commitment and overall our credibility,” said Dallas Police Chief Renee Hall at the ceremony.

Agent Matthew DeSarno, special-agent-in-charge at the Dallas FBI, focused his remarks on the families of the officers.

“You will often have to sacrifice time with them you will worry about them suffer loss with them but its my sincere hope that you will be as proud of them when they retire as you are today," he said.

Marsha Mello traveled to Dallas from Washington D.C. to watch her son, Blake. Blake Mello’s father died from cancer when Blake was just 11.

“He is an Army reservist,” Marsha Mello said. “He's doing the job that his dad always wanted to do.”

Blake Mello said it was a big day for him.

“I’m just kind of happy that I get to follow his dream, cause I’m also in the military and the reserves on the side, doing the same thing that he was doing,” Blake Mello said. 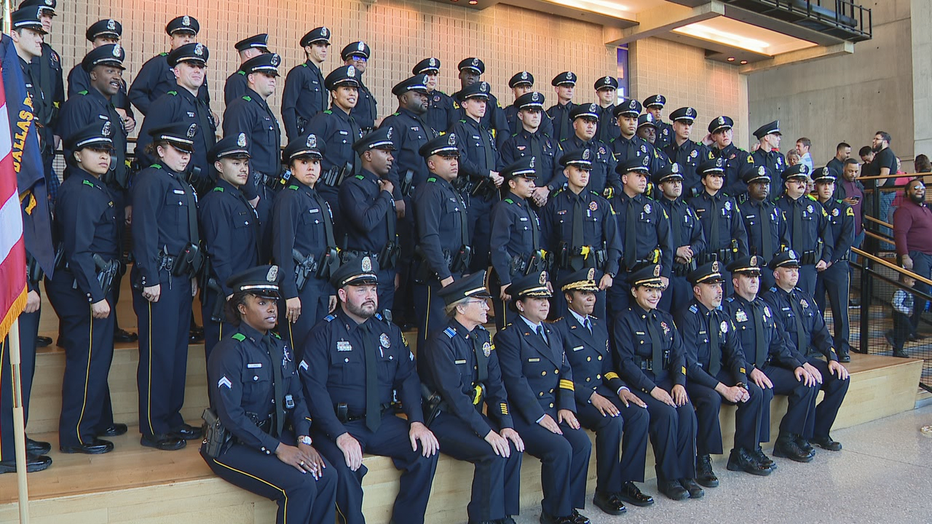 Class president Matthew Fox has a legacy with Dallas police. His dad, Joey, was an officer and died one year ago.

“I'm super excited to carry on the family tradition,” said Fox. “I hope I can do a good job and keep the family name good.”

Carmen Martinez was pinned by her daughter, a former 911 call taker.

“I always wanted to be a police officer, but I wasn't done having kids, so I wanted to go on the backside of it and see what that was about,” Martinez said.

The new officers will be welcomed in a department that has lost numerous people in the past few years.

“I think it’s needed. Think that if I can do my part in the community, think it’s a step,” said Chasity LeBourgeois.

Class 365 still has some post-graduate work ahead.

The next 16 weeks will be with a field training officer learning how it’s done on the streets. That’s followed by four weeks riding with a senior officer before all the training wheels are off and they are on their own.