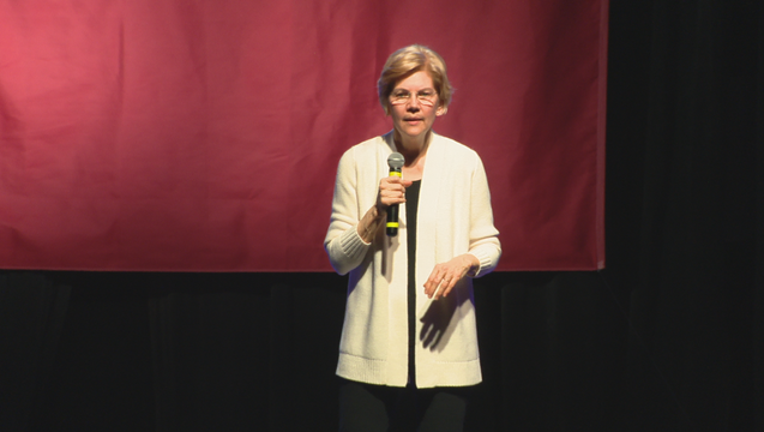 WASHINGTON (AP) - Democratic presidential candidate Elizabeth Warren on Tuesday pitched a sweeping overhaul of the nation's systems for securing its elections, including the creation of a "uniform federal ballot" and the replacement of the independent commission that currently helps administer the vote.

Warren's latest in a series of hefty policy proposals - which have become a trademark as she climbs in the Democratic 2020 presidential primary polls - arrived the day before she's set to appear alongside nine rivals in the first of two highly anticipated debates . The Massachusetts senator's new election security plan gives her fresh fuel as she makes her case to a Democratic base that's keen to choose a nominee who's best prepared to defeat President Donald Trump next year.

At the heart of Warren's election security platform is the establishment of federal rules for the administration of voting, a task that's currently led by state and local officials. Warren would replace the Election Assistance Commission, created in 2002 to help states in holding their votes, with a new independent agency to safeguard balloting from online interference and ensure states comply with the federal standards she's urging.

"Our democracy is too important for it to be under-resourced and insecure," Warren wrote in a blog post outlining her proposal, which she's likely to discuss during a campaign town hall in Miami on Tuesday night. "We need to do everything we can to make sure our elections are convenient, professional, and secure - and we should be willing to pay for it."

Beyond the use of a systematic, federally mandated ballot, Warren is proposing requirements for "automatic and same-day registration, early voting, and vote by mail," she wrote, besides the designation of Election Day as a federal holiday. The redrawing of congressional districts would fall to independent commissions under her plan, an attempt to alleviate concerns about gerrymandering that strengthens a majority party's control.

To help ensure state compliance, Warren's plan would offer to fully fund the elections of states and localities that adhere to her new federal standards, adding extra funding for those that "achieve high percentage voter turnout."

Warren is rolling out her proposal as public worries about the integrity of future balloting remain high after Russian interference efforts during the 2016 election. Polling released last week by The Associated Press-NORC Center for Public Affairs Research found that a majority of Americans describe themselves as extremely or very concerned about foreign interference in forthcoming elections .

Warren, who launched her presidential campaign in February, projects that her election security agenda would cost $20 billion over 10 years, using money raised by her proposed tax on the fortunes of the wealthiest 0.1% of American households. Some experts have raised questions about whether that tax would raise as much money as Warren's campaign estimates, citing concerns about the IRS' ability to effectively collect it.