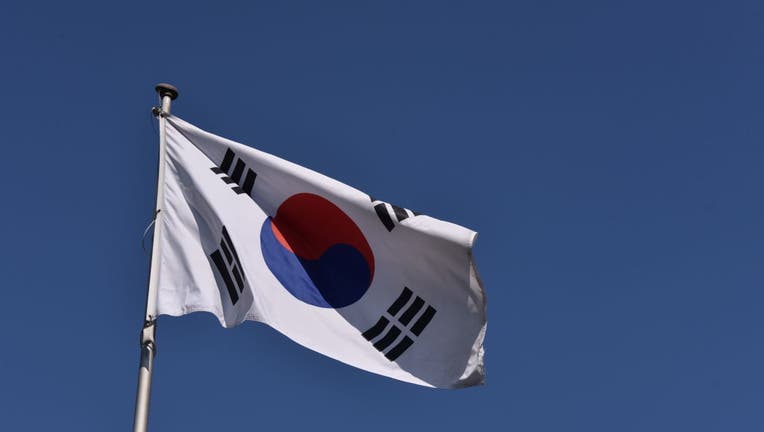 Flag of South Korea Republic of Korea waving in the wind against a blue sky. (Photo by Horst Galuschka/picture alliance via Getty Images)

SEOUL, South Korea - North and South Korea on Thursday separately marked the 70th anniversary of the start of the Korean War with largely subdued commemorations amid the coronavirus pandemic, a day after the North abruptly halted a pressure campaign against the South.

South Korea issued a joint statement with the United States, which fought alongside it during the 1950-53 war triggered by a surprise North Korean invasion. The U.S. still stations about 28,500 soldiers in South Korea in what North Korea views as a military threat.

In the statement, South Korean Defense Minister Jeong Kyeong-doo and U.S. Defense Secretary Mark T. Esper said they “commit to strengthening and adapting the alliance to meet present and future challenges” and urged North Korea to implement past disarmament pledges.

Jeong and other South Korean military leaders later paid their respects at a national cemetery in Seoul, where about 130,000 war-related dead, mostly South Korean soldiers, are buried or honored.

They were given special permission to enter Seoul National Cemetery, which has imposed entry restrictions amid a resurgence of the coronavirus in recent weeks. The cemetery received about 530,000 visitors in June last year but only about 61,000 this month, according to cemetery officials.

A war museum in Seoul, normally a popular place to visit on the war's anniversary or on Memorial Day on June 6, remained shut Thursday.

In the evening, South Korea held a ceremony with 300 war veterans, bereaved relatives and government officials at a military airport near Seoul. It was far less than the 4,000 people who attended last year, according to Ministry of Patriots and Veterans Affairs.

During the ceremony, President Moon Jae-in said he hopes North Korea will “boldly embark on an endeavor to end the most sorrowful war in world history.” He said the two Koreas must achieve peace first before being able to see the path to reunification.

The International Monetary Fund has sharply lowered its forecast for global growth this year because it envisions far more severe economic damage from the coronavirus than it did just two months ago.

North Korea marked the anniversary with visits to monuments to late soldiers and with anti-U.S. rhetoric and newspaper editorials praising its fighting in “the Fatherland Liberation War.”

An institute run by the North's Foreign Ministry said in a statement that "we will continue to build up our strength to overwhelm the persistent nuclear threats that the U.S. has launched at us.”

The main newspaper, Rodong Sinmun, said in an editorial that, “The spirit of defending the country in the 1950s which brought about a victory after defeating the aggressors is valuable mental heritage to be glorified forever, generation after generation."

Seoul’s Unification Ministry, which handles relations with North Korea, said there were no signs that North Korea had organized mass public events commemorating the anniversary.

North Korea considers July 27, the day when the war’s armistice was signed in 1953, a bigger anniversary because it views it as the day of its war victory. But the North held a mass public rally in Pyongyang, its capital, on the 65th anniversary of the war’s start in 2015, the Unification Ministry said.

Seventy years after the war’s beginning, the Korean Peninsula remains technically in a state of war because the armistice that ended the fighting has yet to be replaced with a peace treaty. Animosity has deepened recently as North Korea resumed aggressive rhetoric toward South Korea, blew up a Seoul-built liaison office on its territory and threatened to take steps to nullify 2018 tension-reduction deals.

“Seventy years have passed but nothing has changed ... and we’re tired of that,” Kim Young-man, the son of a South Korean soldier killed during the war, said at the Seoul cemetery.

Observers believe North Korea is trying to wrest concessions from Seoul and Washington amid stalled nuclear talks. Japanese Defense Minister Taro Kono told reporters Thursday that he believes North Korea might have attempted to divert public attention away from problems such as the coronavirus.

North Korea has steadfastly claimed it hasn’t recorded a single virus case, but foreign experts are highly skeptical. They believe the pandemic worsened economic troubles in North Korea because it has closed its border with China, its biggest trading partner and economic pipeline.

On Wednesday, North Korea said leader Kim Jong Un put off planned steps to end the 2018 deals after he and other senior ruling party officials in charge of military affairs “took stock of the prevailing situation.”

European countries may not allow American travelers due to COVID-19

Due to the extremity of the COVID-19 crisis in the U.S., American travelers may not be permitted to visit 30 different European countries.

Experts say North Korea may be trying to leave room for South Korean concessions or may be worried about a stronger response from Seoul, whose help it may need again when it wants to reach out to the United States for future talks.

The Korean War left millions of people dead, injured or missing and destroyed much of the two Koreas. About 36,000 U.S. soldiers were also killed.

During the military airport event, Moon reviewed an honor guard ceremony for the arrival from the United States of the remains of 147 South Korean soldiers killed during the war. North Korea earlier sent the remains to the U.S., where forensic reviews found they were South Korean. Moon said the return of “these valiant warriors” makes “us feel sad but proud” and that “we will engrave their names in our history.”