Texas Governor Greg Abbot held a news conference on Feb. 21 to speak about the state's efforts to recover from winter storms that left millions without power.

HOUSTON - Just as fast as it came, the winter storm that brought chaos to middle America made its way out.

Texas, which experienced some of the coldest temperatures on record for the state last week, is seeing a massive temperature swing and is back up in the 70s and 80s. Those temperatures are much more normal for this time of year for the Lone Star State.

On Feb. 15, just a week ago, Dallas, Texas saw single-digit temperatures as a record-breaking winter storm froze pipes, knocked out electricity for millions and even resulted in several deaths.

Now that the state is thawing, Texans are left to deal with the aftermath of the devastating winter weather anomaly. 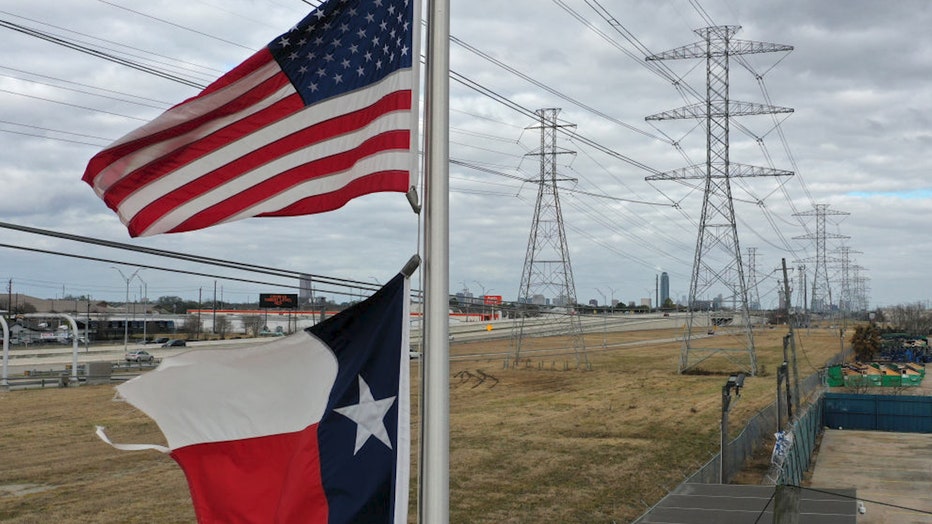 FILE - The U.S. and Texas flags fly in front of high voltage transmission towers on Feb. 21, 2021 in Houston, Texas.

Thursday, State House and Senate members will begin hearings about last week’s failure of the power grid and what led to it. Estimating how much it would cost for all the wintertime upgrades Texas needs is difficult, but the tab would likely be in the billions of dollars.

The federal government also delivered dozens of emergency generators and more than 120,000 blankets to Texans over the weekend. In the Houston area, officials on Monday announced they have set up a relief fund to help cover the cost of repairs and temporary housing for vulnerable families. Gov. Greg Abbott has indicated his fiercely independent state needs help. His office encouraged out-of-state plumbers to come fix Texas pipes.

Harris County Judge Lina Hidalgo said about $2.25 million has so far been raised to help pay for repairs and housing for Houston-area families who lack insurance or who don’t qualify for federal assistance. That includes a $1 million donation from the foundation of CenterPoint Energy, the utility that provides electricity for the Houston area, she said.

Houston Mayor Sylvester Turner asked area residents with the means to donate to the fund."Many families through no fault of their own have homes that are uninhabitable because their pipes froze during the arctic blast," said Turner.

RELATED: Places in Central Texas to go to get a free shower, wash laundry

Meanwhile, the stability of Texas’ power grid came into question as millions of residents were without power for days.

At one hospital, workers stood outside to collect rainwater. Others stood in line at a running tap in a park. A mother of three took her children to shelter in a furniture store after she could see her breath forming in the family’s trailer. University professors fundraised so their students could afford meals.

"There is no timeline. We will not rest until we have legislation passed," Patrick said.

The Associated Press and FOX 4 News contributed to this report.