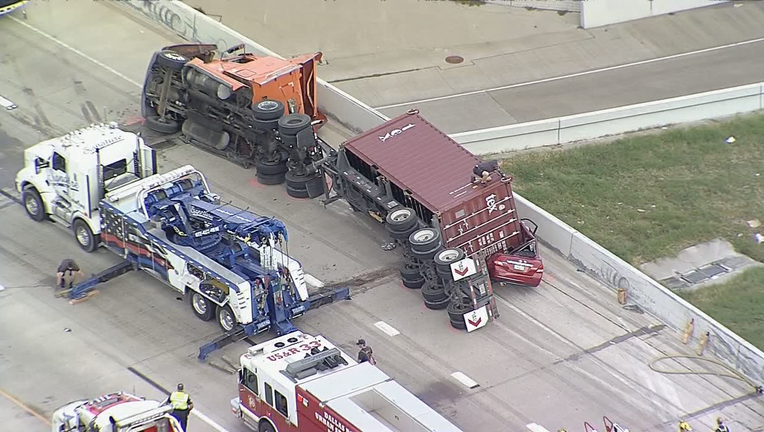 DALLAS - The Dallas County Sheriff’s Department is investigating an 18-wheeler accident that killed one person on the R.L. Thornton Freeway Thursday morning.

The crash happened around 10 a.m. in the northbound lanes of the freeway near Interstate 30. A big rig ended up on its side crushing a red Nissan Versa.

Dallas Fire-Rescue confirmed the driver of the red car died in the crash. She was identified as 75-year-old Sonia Margarito Toledo.

The driver of the 18-wheeler told deputies he was cut off by another vehicle that came into his lane. He braked, possibly swerved to the left and lost control.

Detectives are now investigating and trying to locate that other vehicle.

Anyone who may have witnessed the accident is urged to call Det. E. Embry at 214-589-2323 or email the Sheriff’s Vehicle Crimes Unit at vcu@dallascounty.org.

The crash also caused significant traffic delays. Dallas County Sheriff’s deputies blocked the ramp, forcing all traffic onto I-30 until later in the afternoon.

A hazardous materials crew was also called in to clean up a fuel spill.