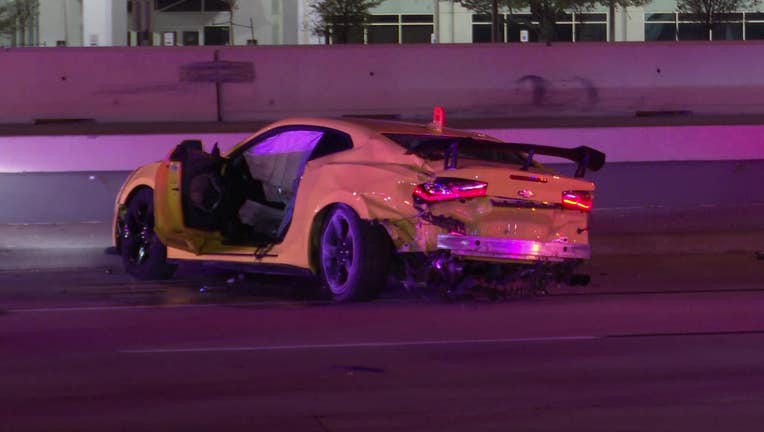 The sheriff's office says a yellow Chevrolet Camaro was traveling at a high rate of speed when it struck another car that then went into a group of pedestrians.

HOUSTON - Authorities say a man and a teen have died after a crash during an underground car meet in northwest Harris County.

The crash occurred in the 14900 block of the Northwest Freeway near Little York around 9:35 p.m. Sunday.

According to Sean Teare, Chief of the Harris County District Attorney’s Office Vehicular Crimes Division, people were gathered for an underground car meet in a parking lot.

"As it spilled out onto the feeder road, we had one individual who informed the group that he was going to do a flyby, or drive past the group at an extremely high rate of speed," Teare said. According to Teare, as the driver did so, he crashed into another car that was not participating in the flyby.

The Harris County Sheriff’s Office says the suspect, 22-year-old Andrew Mock, was driving a yellow Chevrolet Camaro at a high rate of speed when he struck the back of a black Chevrolet Malibu. Deputies say the collision caused the Malibu to leave the roadway and go onto a sidewalk, which was occupied by pedestrians.

Authorities say several pedestrians were struck. One man died at the scene. Two other teenage pedestrians were taken to the hospital by Life Flight in critical condition. Harris County Sheriff Ed Gonzalez says one of the teens passed away Monday morning.

The Cy-Fair Fire Department says another person was taken to the hospital in serious condition, and five other patients were evaluated by EMS but refused transport.