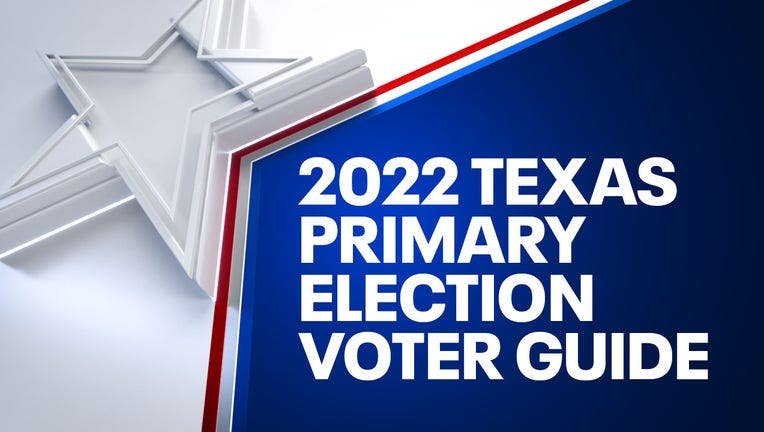 Texans will be heading to the polls today to vote in the party primary elections.

LEARN MORE ABOUT THE CANDIDATES RUNNING FOR TEXAS GOVERNOR

LEARN MORE ABOUT THE CANDIDATES RUNNING FOR TEXAS ATTORNEY GENERAL

Locally, voters will be choosing which candidates will represent their party in the November election for congressional and legislative district offices, judicial seats, and the State Board of Education.

But voters need to be prepared before casting their ballots.

We have put together a guide with everything you need to know to be able to vote in Texas for the 2022 Primary Election, including important dates, sample ballots, and early voting locations. Below we answer the frequently asked questions and more regarding voting.

What is a primary election?

In a primary election, voters select who will be their party's nominees in the November general election.

Texas is an open primary state, meaning voters can cast a ballot in either the Democratic or the Republican primary election no matter which party they're registered with, but not both.

Voters will choose among their chosen party's candidates to see who will represent the party in their corresponding race in the November election.

Propositions on a primary ballot are mainly to get a feel for the party's opinion on issues.

The Politics of Texas: A look at key races ahead of Election Day

Experts join Steven Dial to discuss several races ahead of the Texas primaries on Tuesday.

Am I registered to vote in Texas?

In order to vote in Texas, you must be a registered voter. To see if you're already registered to vote, click here.

The deadline to register to vote in the March 2022 Primary Election was Monday, Jan. 31.

When are polls open on 2022 Texas Primary Election Day?

The polls in Texas are open from 7 a.m. until 7 p.m. Anyone in line at the time the polls close will be allowed to cast their ballot.

Where is my polling place for 2022 Texas Primary Election Day?

Your assigned polling place is based on where you live. Visit your county's election page for the polling locations and sample ballots.

You will also be able to find election day voting locations by visiting the state's webpage, which will be populated with voting sites a few days before election day. Or, you may want to contact the Election Official for State and County Elections in your county.

Texas Democrats have high hopes of turning the state blue and a key to that might be Tarrant County. In fact, that is where Democratic candidate for governor, Beto O'Rourke, has his primary watch party. Good Day discussed the election with longtime political reporter for the Fort Worth Star Telegram and Man About Town, Bud Kennedy.

What photo ID do I need to vote?

If you don’t have one of these acceptable forms of photo ID and can’t reasonably obtain one, you may qualify for a Reasonable Impediment Declaration by showing a copy or original of one of the following approved IDs:

After presenting one of these supporting forms of ID, the voter must execute a Reasonable Impediment Declaration.

Click here for more information on acceptable forms of ID and what you can do if you do not have one.

It's primary election day here in Texas. Polling places are open for Texans to decide who they want on the ballot in November.

Friday, Feb. 18: Last day to apply for a mail-in ballot (received, not postmarked)

Can I vote early by mail?

Not everyone can vote by mail in Texas. It is limited to voters who are one of the following:

For the March 1, 2022 Texas Primary Election, the last day your application could be received by your Early Voting Clerk was Friday, February 18, 2022, in order for you to have received a mail ballot.

When returning a completed mail ballot, make sure to complete the ID field that is located under the flap of the carrier envelope your county sent you with your ballot.

Completed mail ballots must be postmarked by 7 p.m. on March 1. They can also be delivered in person on election day.

You can track the status of your completed mail ballot by clicking here.

The deadline to receive ballots mailed within the United States from non-military and military voters who submitted a mail ballot application is 5 p.m. on Thursday, March 3, if the carrier envelope has a postmark showing it was in the mail by 7 p.m. March 1.

Different deadlines apply to the last day to receive ballots sent by the following:

(1) Non-military and military voters who mailed ballots domestically and submitted an ABBM;

(2) Non-military and military voters who mailed ballots from overseas and who submitted an ABBM;

(3) Non-military voters who mailed ballots from overseas and who submitted a Federal Postcard Application ("FPCA"); and

(4) Military voters who mailed ballots domestically or from overseas and who submitted a FPCA.

Ballots in category (1) must be received by the early voting clerk by March 3.

Ballots in category (4) do not need to have any postmark.

Click here for all the details on special provisions for military and overseas voters.

Click here for the special needs information on the state's election website to ensure that you are fully informed on the services available to you.

Student voters often have concerns over residency for voter registration purposes. Information on student residency issues is available on this webpage.

In Texas, a convicted felon regains the right to vote after completing his or her sentence. Therefore, once you have completed the punishment phase (including any term of incarceration, parole, or supervision, or completed a period of probation ordered by the court), you would be eligible to register and vote in the state of Texas.

CLICK HERE FOR MORE ON THE 2022 TEXAS PRIMARY ELECTION