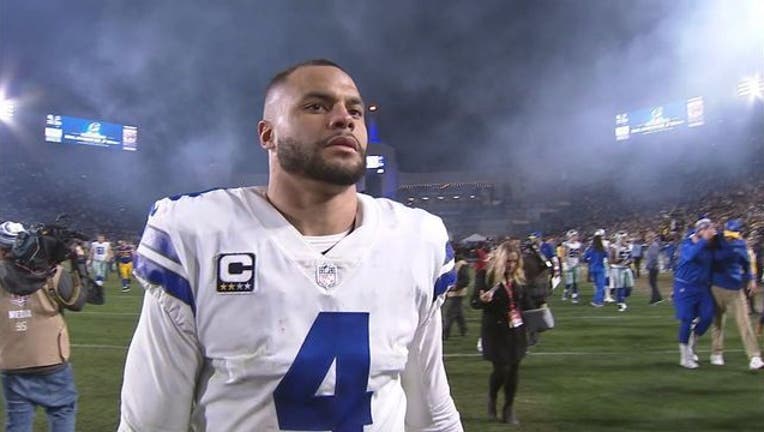 FRISCO, Texas (AP) - Dak Prescott and Ezekiel Elliott have their first playoff win and the same divisional-round block the Dallas Cowboys haven't been able to solve for nearly 25 years.

The star quarterback and running back figure to be leading the Dallas offense for years to come with new No. 1 receiver Amari Cooper, acquired midseason for the Cowboys' first-round pick in this year's draft.

Combined with a promising young defense that was humbled in a 30-22 divisional loss to the Los Angeles Rams, Prescott and crew have hope they can get the Cowboys within a win of the Super Bowl for the first time since the franchise's fifth championship following the 1995 season.

But Dallas has been here before: six divisional losses since Hall of Famers Troy Aikman, Emmitt Smith and Michael Irvin last led the Cowboys to more than one win in the same postseason.

Two of the losses have been with Prescott and Elliott, the other to Green Bay as the NFC's top seed when they were rookies two years ago.

"We have a lot of guys that have the right makeup to make sure that we get back here, and to hopefully get past this round," Prescott said. "You're going to lose guys and guys are going to be gone, sometimes coaches. And, that's the unfortunate part about it.

"So, right now it's just about enjoying this time, with these guys and with this team. Then it's moving forward, and getting back to this point and getting past this point."

After losing on some last-second magic by Aaron Rodgers at home to end the 2016 season, the Cowboys missed the playoffs last season when Elliott was suspended six games halfway through the season on domestic violence allegations.

Dallas recovered from a 3-5 start to win the NFC East with a 7-1 finish, then beat Seattle 24-22 in the wild-card round. The new part of the experience was a divisional game on the road. For one of the few times this season, the defense had the big letdown for Dallas, allowing a Dallas playoff-record 273 yards rushing.

"We'll treat this season just like those past seasons," safety Jeff Heath said in a nearly deserted locker room Sunday, about 16 hours after the loss to the Rams.

"It's a tough lesson to learn last night of just how switched on you have to be in a game like that and how the margin for error's so small when you're on the road in the playoffs."

The biggest question on contracts for the core of the Dallas offense is whether Prescott gets an extension before the final year of the fourth-round pick's four-year rookie deal.

The Cowboys are all but certain to exercise the fifth-year option on Elliott, which would take him through 2020, and the Raiders had already done that with Cooper for next season before the trade.

Cole Beasley is an unrestricted free agent after proving to be an effective slot receiver on the four-year contract he just finished. Tavon Austin, acquired in a trade during last year's draft, offers similar skills with more speed.

With 15-year tight end Jason Witten's retirement before this season, re-signing 2015 seventh-round pick Geoff Swaim could be a priority. Swaim, however, has been plagued by injuries, including a broken wrist that limited him to nine games this season.

The more significant questions in free agency are with their pass rushers, starting with DeMarcus Lawrence.

A year after finishing tied for second with 14½ sacks, Lawrence hit double digits again with 10½ sacks playing on a $17.1 million franchise tag. The sides weren't close in negotiations last offseason, raising the possibility of another franchise tag.

Defensive lineman David Irving has shown plenty of promise but played just two games after a four-game substance-abuse suspension, an ankle injury and other off-field issues. He's an unrestricted free agent whose future appears to be elsewhere.

Randy Gregory, who missed 30 of 32 games over the previous two seasons because of multiple suspensions, made it through the season unscathed, getting career highs with 14 games and six sacks. He's an exclusive rights free agent.

With the emergence of young linebackers Jaylon Smith and Leighton Vander Esch, Sean Lee's future is in question going into the final year of his contract. He was relegated to a backup role once he recovered from hamstring injuries.

Lee potentially becoming expendable is on the better illustrations of how the Cowboys have evolved into one of the youngest teams in the NFL. When the season ended, every Dallas starter on offense and defense was younger than 30.

"A lot of different experiences this year that we'll grow from, we'll develop from," coach Jason Garrett said. "The early season inconsistency that we had that we grew out of and played significantly better over the last half of the season.