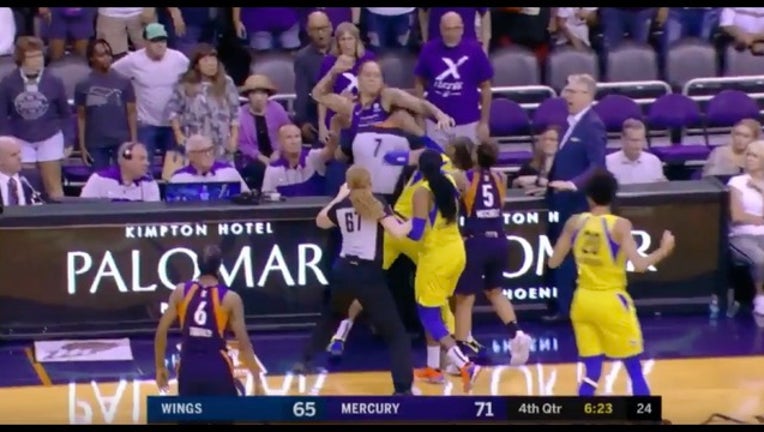 NEW YORK (AP) - Mercury center Brittney Griner will miss the next three games after the WNBA suspended her Tuesday for her role in a fight in the Dallas-Phoenix game over the weekend that resulted in six players getting ejected.

The league punished Griner for throwing punches, escalating the incident and pushing Wings forward Kayla Thornton's face with an open hand. Dallas forward Kristine Anigwe was suspended two games for instigating the initial altercation with Griner and taking an open-handed swing at her. Thornton also was suspended two games for her role in the scuffle.

"I got three games, I'm not disputing that at all," Griner said. "Do I think it should have been three across the board? I would have been happy with that. I'm not happy, and it's not because of my suspension. I take ownership of mine, no place for that in sports, and I apologize to everybody that was there."

With 6:25 left in the fourth quarter, Griner and Anigwe got tangled up in the lane and a scuffle ensued. Griner had to be restrained by an official at midcourt, where she was still trying to get at Dallas players.

She regretted that the fight took attention away from her Heart & Sole charity drive, in which fans donated shoes to help the homeless.

"It was turning out to be such a great night. A dunk, won some money for a fan, had over 600 shoes brought in," Griner said. "It definitely didn't turn out that way at the end."

Phoenix guard Diana Taurasi and Dallas forward Kaela Davis were suspended a game apiece for leaving the bench area during Saturday's altercation and directly engaging with the opposing team.

The Mercury's center bought 300 tickets for Wednesday's game to "provide the best home court advantage in the WNBA".

Taurasi, who currently is injured, will serve her suspension during the first game after she is medically cleared to play. Davis will miss Sunday's game, when Dallas visits Connecticut, due to the league's requirement that a team have a minimum of eight players dressed for all games. Because of injuries, the Wings are down to 10 healthy players.

Taurasi and Davis also were fined $500. Additionally, Phoenix forward DeWanna Bonner was fined $500 for escalating the incident. Briann January also was ejected from the game but wasn't punished after the league deemed she was acting as a peacemaker.

There haven't been too many fights in the 23-year history of the WNBA. The biggest was a brawl between Los Angeles and Detroit in 2008 when 10 players were suspended for their actions, as well as an assistant coach for the Shock. Plenette Pierson, who was deemed to have initiated the altercation, got a four-game suspension, the most of anyone in that fight.