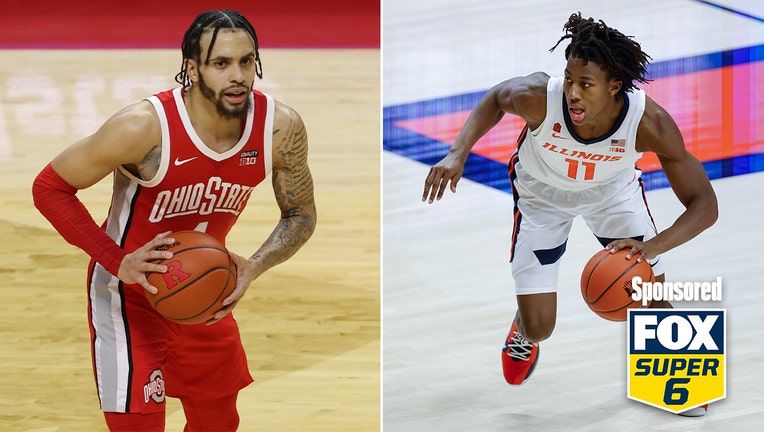 If you want to be the team to beat in the Big Ten in 2021, you better learn how to hang around to make that late push.

While the calendar still says that it's mid-January, there are times when you can feel the importance towards March when certain teams get together with numbers in front of their name.

That’s the case for Ohio State and Illinois. The 21st ranked Buckeyes will travel to Champagne, Ill. for a Saturday afternoon clash against the 14th ranked Illini (12 noon, FOX) in a game that could go a long way to setting the field for the Big Ten championship push.

And you could win right along with it with FOX Super 6. Just download the Super 6 app, predict the right answers to the six questions on this game and you could win $1,000. It’s that simple!

Here are the questions and how to look at it:

Which team will score the last point of the first half?
Ohio State or Illinois

One of the things that has stood out early in the season is how dominant both teams have been in the first half defensively. After their Wednesday night win over Northwestern, Ohio State has outscored opponents 470-423. Illinois has outscored its opponents 502-413 through Wednesday evening as well. Something would have to give.

Ohio State has averaged 7.5 3-pointers per game after the victory over the Wildcats. Meanwhile, the Illini are also at 7.5 trifects a contest. Both teams also average around 7.4 3-pointers a game yielded on the defensive end as well.

Duane Washington Jr. is the leading scorer for the Buckeyes, averaging 15.7 points a game. He did have 23 in the win over the Wildcats on Wednesday night. E.J Liddell and Justice Sueing are also averaging in double figures for the Buckeyes.

Ayo Dosunmu is leading the Illini, averaging 22.4 points per game thanks to a large part to a 50 percent shooting from the floor. He’s also teamed with Kofi Cockburn, who is averaging 17.3 points a game. Those are the only two Illinois players averaging in double figures.

Both teams can put some serious numbers up. Illinois is averaging 83.3 points per game and outscoring their opponents by 15.5 points a night. However, one trend to keep in mind is that Big Ten games have been far more reserved in the last few weeks. For instance, Illinois has scored in the 60s in three of its last four games- Indiana, Purdue and Maryland all at home.  Ohio State is averaging 76.8 points a game.

Who will win the game?
Ohio State or Illinois

The best ability that a Big Ten team could have this year is a short memory. Illinois’ 66-63 loss on Sunday at home to Maryland has been forced to marinate a little bit because a COVID-19 postponement against Nebraska this week has keep the Illini idle. Illinois is 6-1 at State Farm Center, and they have played really good basketball at home.  Ohio State has struggled away from Columbus, going 1-3 in conference play on the road court.