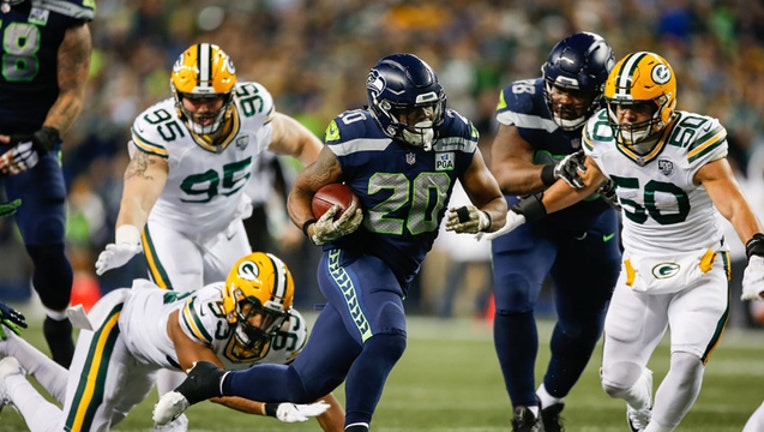 Rashaad Penny #20 of the Seattle Seahawks runs the ball passed Blake Martinez #50 of the Green Bay Packers in the first half at CenturyLink Field on November 15, 2018 in Seattle, Washington. (Photo by Otto Greule Jr/Getty Images)

SEATTLE (AP) - After a shaky beginning, Russell Wilson got hot in the fourth quarter and kept the Seattle Seahawks in the middle of the NFC playoff race.

Wilson threw for 225 yards and his 15-yard touchdown pass to Ed Dickson with 5:08 left was the difference in the Seahawks' 27-24 victory over the Green Bay Packers on Thursday night.

In a key matchup in the battle for the two NFC wild-card spots, Seattle (5-5) snapped a two-game losing streak by overcoming an early 14-3 deficit. Wilson was shaky at times early game, but was outstanding in the fourth quarter, capping the winning drive by recognizing a blitz and hitting Dickson quickly for his second TD pass of the night. Seattle still has not lost three straight games since the middle of the 2011 season.

Aaron Rodgers had a huge first half for Green Bay (4-5-1) and threw for 332 yards, but the Packers had just one scoring drive in the second half, helped by a 57-yard strike from Rodgers to Davante Adams. Rodgers threw a pair of touchdown passes in the first half, but never got the ball back after Green Bay punted with 4:20 left.

Seattle ran out the clock thanks to a pair of runs from Mike Davis.

Chris Carson rushed for 83 yards and a touchdown, overcoming the mistake of fumbling on the first play of the game and setting up Green Bay's opening score. Tyler Lockett had two key receptions late in the fourth quarter and Doug Baldwin had his first TD catch of the season for Seattle.

Rodgers was 21-of-30 passing with 10 of those going to Adams for 166 yards receiving. Backup tight end Robert Tonyan had the first catch of his career go for a 54-yard touchdown to give Green Bay an early 14-3 lead. The Packers led 21-17 at halftime after Jones caught a 24-yard TD pass from Rodgers in the final minute of the half, but Green Bay's offense was stymied in the second half.

The Packers gained just 114 yards in the second half, half coming on the one throw from Rodgers to Adams. That pass set up Mason Crosby's 36-yard field goal with 8:23 left, but Wilson had one more answer.

Wilson hit Lockett on consecutive plays for 18 yards - to convert a third-down - and 34 yards to the Green Bay 16. Two plays later, facing another third-and-long, Wilson recognized the blitz and hit Dickson quickly over the middle to put Seattle in front.

That proved to be enough. On Green Bay's next drive, Rodgers short-hopped a pass on third-and-2. Rather than going for it on fourth-down, Mike McCarthy opted to punt despite having just one time out. Seattle never gave the ball back.

Green Bay was down four starters with CB Kevin King, S Kentrell Brice, LB Nick Perry and WR Randall Cobb all out due to injuries. They lost two more in the first half when Bashaud Breeland - starting for King - aggravated a groin injury and Jimmy Graham injured his thumb. Graham had a 13-yard reception on Green Bay's first offensive play in his return to Seattle, but that was his only catch.

Mike Daniels suffered a foot injury early in the second half and backup safety Raven Greene suffered an ankle injury. Neither returned.