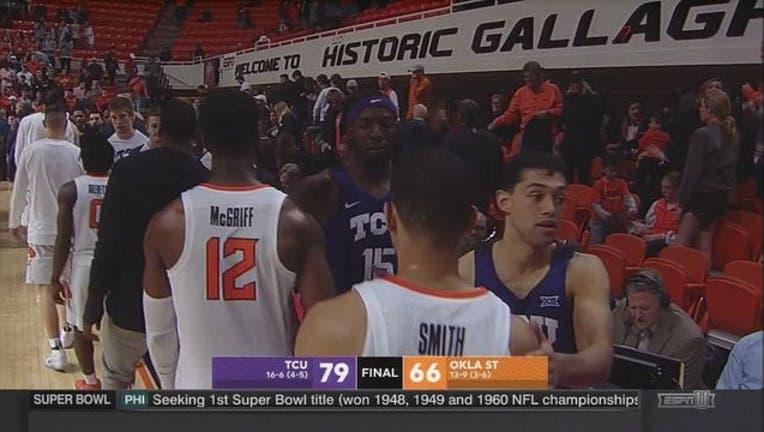 Jeffrey Carroll scored 18 points and had five rebounds, while Kendall Smith had 13 points and three assists for Oklahoma State (13-9, 3-6).

It was the third straight loss for the Cowboys following their 83-81 overtime upset over then-No. 4 Oklahoma 10 days earlier.

TCU: After four straight close losses on the road, the Horned Frogs finally emerged with a comfortable victory away from Fort Worth. They had lost overtime contests at Texas and Oklahoma before falling 81-78 at Vanderbilt on Saturday. TCU displayed impressive resilience by blunting a late Oklahoma State comeback attempt. After maintaining a double-digit lead for most of the second half, the Horned Frogs allowed Oklahoma State to get to within six with 6:38 to go. But TCU responded with a 9-2 run over the next three minutes to secure the victory.

Oklahoma State: For the fourth straight home game, the Cowboys fell behind by a wide margin in the second half, but this time, the inspirational comeback attempt fell short. Oklahoma State rallied from an eight-point deficit in the last 3:22 in a 96-87 overtime win over Iowa State on Jan. 6, then climbed out of a 12-point hole in the final 5:55 to take down Texas 65-64 on Jan. 13. The "Cardiac Cowboys" also battled back from five down with 2:11 remaining to shock then-No. 4 Oklahoma 83-81 in OT on Jan. 20. In this one, after falling behind by as much as 16 midway through the second half, Cam McGriff's dunk with 6:38 left capped off a 14-4 run as OSU closed to within 63-57, but the Cowboys could get no closer.

TCU: The Horned Frogs are at home on Saturday against No. 10 Texas Tech, the only Big 12 team they haven't faced this season.

Oklahoma State: The Cowboys head out on the road to Allen Fieldhouse to take on No. 7 Kansas.