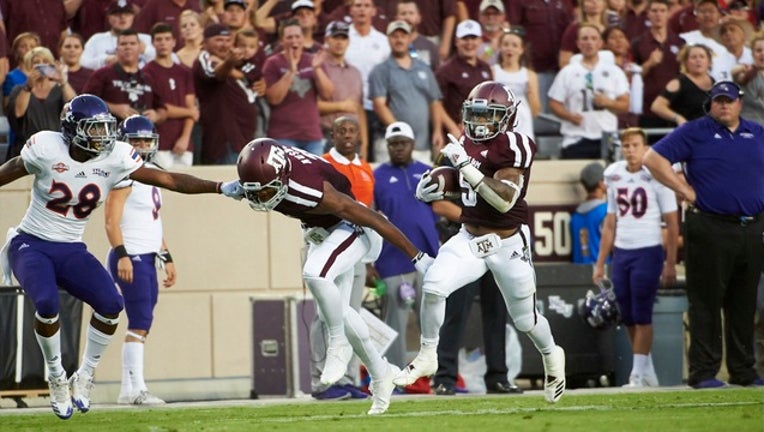 Trayveon Williams #5 of Texas A&M breaks free for a 73 yard touchdown run against Northwestern State during the first half of a football game at Kyle Field on August 30, 2018 in College Station, Texas. (Photo by Cooper Neill/Getty Images)

COLLEGE STATION, Texas (AP) - Coach Jimbo Fisher has preached about the importance of explosive plays since he took over at Texas A&M.

On Thursday night, Trayveon Williams gave his new coach exactly that when he ran 73 yards for a touchdown on the team's third offensive play to get things going in what ended as a 59-7 rout of Northwestern State in Fisher's debut at the school.

"Coach Fisher (says) the team that has the most explosive plays is going to be the team that wins," Williams said. "So just being able to create that explosive play and just giving a lot of juice to the offense and to the team ... was just a great opportunity to ignite the game."

Williams ran for 240 yards and three touchdowns in just more than two quarters to lead the Aggies to the victory.

Williams scored Texas A&M's first touchdown on a 73-yard run, and a 2-yard scamper made it 21-0 in the second quarter. The junior pushed the lead to 42-0 when he burst through the line and simply outran everyone else for a 40-yard score early in the third quarter in his last play of the night.

"What Trayveon does is he has great acceleration," Fisher said. "He sees very well. He's just a natural runner with the football."

Williams said he didn't know how many yards he'd piled up until his night was done.

"We were just going out there and having fun ... just got caught up in the moment and I didn't even realize I had what I had," he said.

Kellen Mond started at quarterback for the Aggies after vying with Nick Starkel for the job throughout camp and threw for 184 yards and touchdown passes of 7 and 8 yards and added a score on a 1-yard run. Starkel took over in the third quarter with the game out of hand and threw for 63 yards and a touchdown.

The Aggies handled business easily against Northwestern State, an FCS school which plays in the Southland Conference, to help Fisher to a victory in his first game since leaving Florida State for a 10-year, $75 million contract.

Fisher, who won a national championship at Florida State in 2013 admitted to being a bit nervous before kickoff on Thursday night.

"You're breaking new ground in new place," he said. "You've got to go out there and still play and coach and do the things you have to do. So I have butterflies no matter how long you're anywhere. It's just part of the game."

Northwestern State split plays at quarterback between Shelton Eppler and Clay Holgorsen. Eppler started and threw for 105 yards and Holgorsen finished with 125 yards passing and touchdown.

"The one thing we talked to this football team about afterward is that this one game will not define us," first-year coach Brad Laird said. "There's 10 more opportunities not counting postseason where we have the opportunity and look forward to."

Northwestern State: The Demons were overmatched in their first game against a Southeastern Conference team since 2015, but Eppler and Holgorsen both made some nice throws that should translate to more success when they play other FCS schools.

Texas A&M: The Aggies looked good against lesser competition on Thursday night but will have to play much better next Saturday to get a win next Saturday when second-ranked Clemson visits.

Fisher utilized the tight end far more than the Aggies had in the years under coach Kevin Sumlin, who was fired in November, with Jace Sternberger finishing with five receptions for 56 yards and two touchdowns.

He's the first tight end at Texas A&M with two touchdown catches in a game since Michael Lamothe did it against Texas Tech in 2010.

While the offense looked in its first time out, there were some problems on defense with linebacker Otaro Alaka and safety Donovan Wilson both being ejected for targeting in the first half.

"That's just a fundamental mistake that we cannot have," Fisher said. "Hopefully, that's a lesson we learn because we can't do that anymore."

Northwestern State: The Demons host Grambling on Sept. 8 before beginning conference play at Lamar on Sept. 15.

Texas A&M: The Aggies have a brutal early schedule with a trip to No. 1 Alabama looming in Week 4 after their meeting with Clemson next week and a home game against Louisiana-Monroe on Sept. 15.