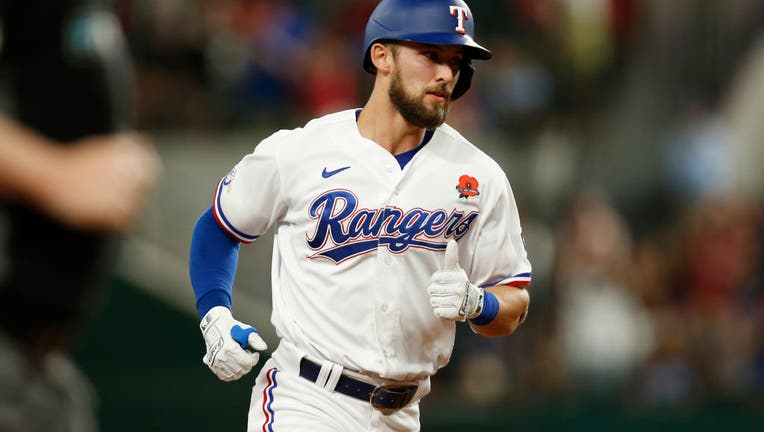 ARLINGTON, TEXAS - MAY 30: Eli White #41 of the Texas Rangers rounds the bases on his two-run home run in the second inning against the Tampa Bay Rays at Globe Life Field on May 30, 2022 in Arlington, Texas. (Photo by Tim Heitman/Getty Images)

ARLINGTON, Texas - Rangers center fielder Eli White initially wasn't sure if he could even make the catch. He just jumped as high as he could at the wall.

"It's like he just kept going up," Texas manager Chris Woodward said. "I thought he jumped up too early, and he just kept rising."

After White sprinted to the warning track and jumped, his upper body was well above the 6-foot wall fronting the Rays bullpen in left-center. His left arm was fully extended above his head when he made the grab more than 400 feet from home plate.

"That was definitely the best play I’ve ever made," said White, primarily a middle infielder for much of his early time in the minors. "It was the kind of play I’ve been dreaming about making ever since I've made the transition to outfield."

Glenn Otto (3-2), the rookie right-hander who had walked and hit a batter with a pitch before that, lifted his glove to salute his teammate. Choi even smiled about it.

"If there was any sign that the night wasn't going to go our way, maybe that should have been it," Rays manager Kevin Cash said. "Ji-Man got a lot of that baseball."

Otto said he had never seen or been part of anything like that, calling White "one of the most athletic guys I’ve been around ... might be Spiderman."

White, who estimated his vertical leap at 40 inches, smiled at the comparison to his favorite superhero — and when the highlight then popped up on televisions in the clubhouse.

Rays starter Drew Rasmussen (5-2) walked the first three batters he faced and threw two wild pitches before Calhoun went the opposite way. Calhoun's groundball single through the open left side of the infield because of a defensive shift put Texas up 2-0.

After Josh Smith led off the Texas second with a single in his first big league at-bat, White homered to straightaway center field as the ball sailed beyond the reach of a leaping Brett Phillips. White's second homer of the season gave the Rangers a 4-1 lead.

Smith and White, in the bottom two spots of the Texas lineup, both had three hits. Smith became the sixth Texas player with three hits in his MLB debut, the first since Nomar Mazara in 2016.

White had a bunt single in the sixth before another single and another nice defensive play — a sliding catch in shallow right-center to end the Rays eighth.

"This guy is the best athlete we have in the organization," Woodward said. "So it’s not surprising to all of us that know him."

Otto matched his longest career outing by going six innings and exited with a 9-2 lead. Only one run was earned as the right-hander struck out four, walked three and threw 60 of his career-high 99 pitches for strikes.

Rasmussen, 5-0 in his six previous starts, gave up five runs in three innings. The first three batters were the only ones he walked, and he struck out three.

The Rays had three consecutive RBI singles in the seventh inning off lefty Matt Moore. All five batters who faced Moore reached base (four hits and a walk). ... Choi was easily thrown out to end the third when trying for a double on a ball that ricocheted off the wall in left. It was Tampa Bay's MLB-high 23rd out made on the bases this season.

Rangers: Versatile INF/OF Brad Miller was put on the 10-day IL with a right hip impingement. He was removed from Sunday’s game at Oakland with tightness in his hip.

Rangers left-hander Martín Pérez (3-2) has allowed no more than one earned run in each of his last seven starts and leads the majors with a 1.60 ERA. He hasn’t given up a home run in 59 1/3 innings, the longest active streak in the majors, going back to last season. Tampa Bay hit three homers off Pérez last July 30 when he was pitching for Boston.