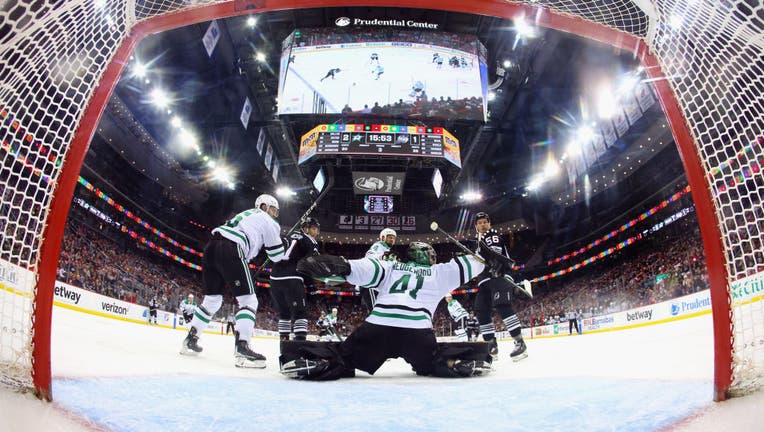 NEWARK, NEW JERSEY - DECEMBER 13: Scott Wedgewood #41 of the Dallas Stars tends net against the New Jersey Devils during the third period at the Prudential Center on December 13, 2022 in Newark, New Jersey. (Photo by Bruce Bennett/Getty Images)

NEWARK, N.J. - Roope Hintz scored the go-ahead goal with three seconds left in the second period and backup Scott Wedgewood made 35 saves against his former team as the Dallas Stars beat New Jersey 4-1 on Tuesday night, sending the Devils to their third straight loss.

With both teams playing their second game in two nights, Hintz snapped a 1-all tie with his 13th goal off a scrum in the crease in front of Devils netminder Akira Schmid.

Ty Dellandrea, Esa Lindell and Mason Marchment also scored for Dallas, which improved to 10-3-3 in its last 16 games against the Devils. Lindell and Marchment both scored into an empty net.

"We did what we had to do in the third, a couple of big blocks,'' Stars coach Peter DeBoer said. "It was a critical turning point to go into the third period with a lead. It was an important two points for us. We did the important work to get the two points against a good team."

"It was a tough game for both teams, not too many opportunities,'' Devils forward Tomas Tatar said. "That goal with three seconds left didn't help us and we couldn't score another one. ... Teams come here now and know what to expect. Hopefully this makes us stronger."

The Stars lost 2-1 at Pittsburgh on Monday while the Devils dropped a 4-3 overtime decision to the New York Rangers at Madison Square Garden.

Hintz, a 26-year-old Finnish forward, has 10 points (four goals, six assists) in his last seven games. Assists on his goal went to Miro Heiskanen and Jason Robertson, who extended his point streak to 19 games.

The 30-year-old Wedgewood, who played parts of three seasons for New Jersey, made a number of excellent saves. He stopped Devils leading scorer Jack Hughes 13 minutes into the second period and denied Fabian Zetterlund in alone on the right wing at 15:40.

Wedgewood, drafted by the Devils in 2010, also made a sharp save on Yegor Sharangovich in front 10:14 into the third. He stopped 19 of 20 shots in the second and 10 more in the third to seal the win.

"I spent a lot of time here, a place that is near and dear to my heart,'' Wedgewood said about returning to New Jersey. "It went my way tonight. It was huge for us to weather the storm, go into the third period with a lead and hold it."

Dellandrea broke a scoreless tie at 6:03 of the second when he tipped Ryan Suter’s shot past Schmid. The goal was the fifth this season for Dellandrea, a first-round draft pick by the Stars in 2018.

Wood tied it at 7:55 of the second with his seventh goal, redirecting a shot by defenseman Kevin Bahl. Sharangovich also assisted.

Schmid also made several excellent saves in the second, denying Robertson early in the period, then making successive stops on Luke Glendening and Joe Pavelski midway through. Schmid made 26 stops.

The Devils also dropped a 6-4 decision at home to the Islanders last Friday. They previously had lost two straight only in the opening two games of the season.

"Our desperation was not high enough,'' coach Lindy Ruff said. "A couple of our top players had a tough night."

The Stars were playing the second game of a five-game road trip. They visit Washington, Carolina and Columbus before returning home to face Edmonton on Dec. 21.

The Devils have home games ahead against Philadelphia and Florida following their first three-game slide of the season.

"We're facing a few bumps in the road, a little adversity,'' Ruff added. "These are the challenges you have. There are no easy games."