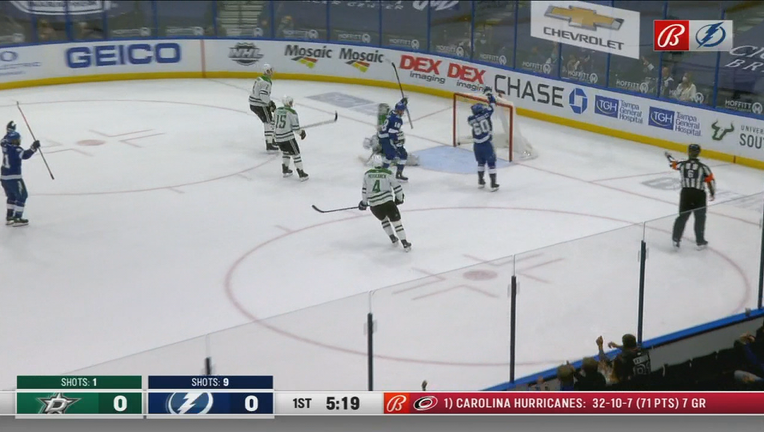 TAMPA, Fla. - Blake Coleman converted a short-handed penalty shot and Andrei Vasilevskiy stopped 20 shots for his 26th career shutout to lead the Tampa Bay Lightning to a 3-0 victory against the Dallas Stars on Thursday night.

Ondrej Palat and Brayden Point also scored for Tampa Bay, which has won four consecutive games to remain one point behind Florida for second place in the Central Division with two fewer games played.

"We’re getting some good results and putting together some 60-minute efforts,’’ Lightning defenseman Ryan McDonagh said. "Our group will want to continue to improve and get better in all situations here.’’

Vasilevskiy’s shutout, his third this season against Dallas, is his fifth of the season. Vasilevskiy also reached 30 victories for a franchise-record fourth consecutive season.

"The third period was championship hockey,’’ Coleman said. "Guys were committed to blocking shots, paying the price physically ... that’s the kind of hockey we need going into the playoffs. We’ve had some lapses and this was as good step in the right direction.’’

Jake Oettinger stopped 25 shots for Dallas, which has lost consecutive games in regulation for the first time since April 4-6.

The Stars remain two points behind the Nashville Predators for fourth place in the division with one fewer game played. Dallas plays in Nashville on Saturday for the final meeting of the season between the teams.

Palat put Tampa Bay in front with his 15th goal of the season. It extended his scoring streak to seven games.

After Alex Barre-Boulet put pressure on Dallas defenseman Jamie Oleksiak, forcing him back behind the Stars’ net, Oleskiak reversed the puck along to boards to Blake Comeau. But Palat came down the boards to put pressure on Comeau, who tried to give it back to Oleksiak. The pass was disrupted by Palat, who then picked the puck off the blade of Oleksiak and beat Oettinger with a wrist shot at 14:41.

"Bad turnover by myself ... this time of year that can’t happen,’’ Comeau said. "They’re such a good team that any time you don’t take care of the puck, they are going capitalize. Frustrating turnover by myself.’’

Dallas pushed back in the second period, outshooting Tampa Bay 11-2, but was unable to solve Vaslievskiy.

"Vasy made some big saves for them at the time and we had some odd mans that we didn’t score,’’ Dallas head coach Rick Bowness said. "That second period when we controlled the period as well as we did, we need to find a way to score a goal and we didn’t.’’

Coleman, who was tripped up by John Klilngberg after stealing the puck on a Dallas power play, skated in and snapped off a wrist shot over Oettinger’s glove at 8:27 of the third period for his 10th career short-handed goal.

"I was pretty gassed right before I stripped the puck, so it took everything I had just to get that breakaway,’’ Coleman said. "But I have a couple of moves that I like to go to and that was one of them. The ice was a little bouncy tonight, so sometimes you have have to keep it simple and shoot the puck.’’

Point added an empty net goal with 1:21 left in the game.

Dallas C Tyler Seguin, who has yet to play this regular season after undergoing hip surgery in the offseason, continues to skate with the team with a possible eye on getting back in the lineup before the end of the regular season, which is scheduled to end for Dallas on May 10

"He skated with us this morning, he’ll skate with us (Friday), then again on Saturday,’’ Dallas head coach Rick Bowness said. "We’re hoping to see him next week, but he’ll tell us when he’s ready to go.’’

Dallas: At Nashville Predators on Saturday.