The Tampa Bay Buccaneers quarterback made the announcement on his Instagram page Tuesday morning, following weeks of speculation. It was even reported over the weekend that he would retire, only for those reports to then be refuted, with it being said Brady hadn't yet made up his mind.

"I have always believed the sport of football is an ‘all-in’ proposition -- if a 100% competitive commitment isn't there, you won't succeed, and success is what I love so much about our game," Brady began his announcement. "I have tried my very best these past 22 years. There are no shortcuts to success on the field or in life."

MORE: The GOAT gave the Bucs the greatest two years of all time

He then continued, "This is difficult for me to write, but here it goes: I'm not going to make that competitive commitment anymore. I have loved my NFL career, and now it is time to focus my time and energy on other things that require my attention."

The Bucs responded to Brady's announcement on Tuesday with a statement from the Glazer family, which owns the team, saying, "Tom arrived in Tampa Bay with an unprecedented level of expectations and delivered some of the most memorable moments in our franchise history. His impact on our team and community was immediate and profound. Tom's remarkable NFL journey has come to an end, but we will continue to celebrate his legendary career as the greatest quarterback of all time and are appreciated and grateful for the time he spent as a Buccaneer. Saying goodbye to a legend is never easy, but we wish him continued success in retirement."

Tom Brady fans were left unsure how to feel after conflicting reports about the superstar's future.

NFL Commissioner Roger Goodell said Brady would be "remembered as one of the greatest to ever play in the NFL," nothing that his record five Super Bowl MVP awards and seven Super Bowl championships "set a standard that players will chase for years."

Florida Gov. Ron DeSantis echoed those calling Brady the greatest in the NFL, and then went one step further, saying he was perhaps the best professional athlete of all time as well.

After discussing the outcome of a deputy-involved shooting, Polk Sheriff Grady Judd gave his thoughts on Tom Brady's retirement, saying he glad he is finishing his career with the Tampa Bay Buccaneers.

FROM 2020: It's official: Tom Brady is going to be a Tampa Bay Buccaneer

"I never thought anyone would surpass Michael Jordan. If anyone has done it, Tom Brady has done it," DeSantis said. "He's had a hell of a career."

Bucs fans were left brokenhearted over the weekend as fans heard the rumors that Brady was retiring and may have played his last game at Raymond James Stadium.

Fans were desperate to hear from Brady himself, but were met with silence, until Monday night when Brady finally spoke out.

A 10-year-old cancer survivor got to thank his idol, Tom Brady for helping him beat brain cancer. The touching moment played out during Sunday night's Bucs game in Tampa when Brady caught up with the young fan after the game and gave him a hat to commemorate the moment.

Tom Brady broke his silence on his podcast on Monday to address rumors of his alleged retirement. At the time, he still claimed he had not made any decisions about his future with the NFL. But hours later, he made his retirement announcement. The 44-year-old quarterback has already stated a desire to spend more time with his wife, supermodel Gisele Bundchen, and three children.

Brady became the starter at Michigan in 1998 and led the team to two bowl wins during the course of his collegiate career. He was then drafted in the sixth round by the New England Patriots in 2000. Brady spent 20 seasons with the team -- a run that includes nine Super Bowl appearances, six of those as champion. 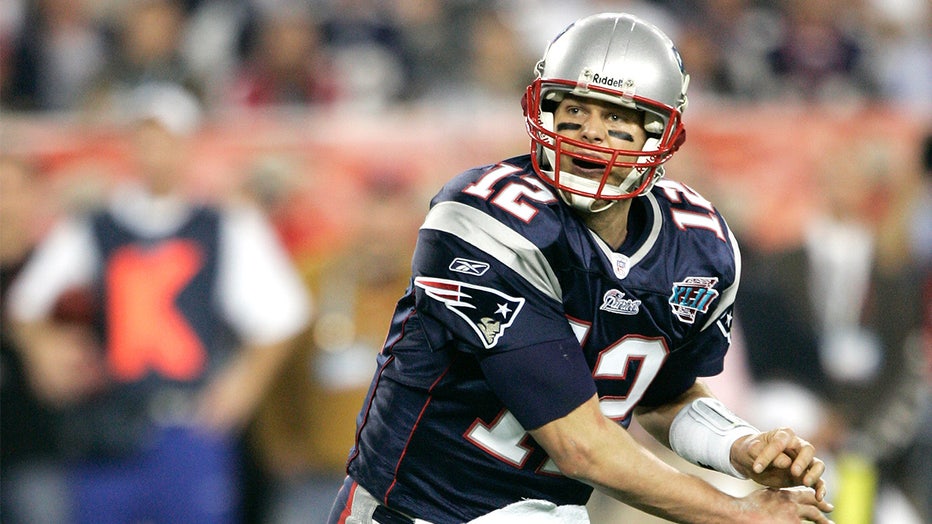 In March 2020, he announced he signed a contract with the Tampa Bay Buccaneers, a welcomed distraction for local fans that came just days after the pandemic was made official and Florida began closing businesses.

At the time, the legendary quarterback said he was "excited humble, and hungry."

"I’m starting a new football journey and thankful for the @buccaneers for giving me an opportunity to do what I love to do. I look forward to meeting all my new teammates and coaches and proving to them that they can believe and trust in me...I have always believed that well done is better than well said, so I’m not gonna say much more - I’m just gonna get to work."

In February 2021, he led the Bucs to victory and made history. The team became the first to win a Super Bowl in their home stadium.

Then, of course, they joined in on the pandemic tradition of having a championship boat parade.

Tampa is getting its first view of Tom Brady's secret workouts -- and they include Rob Gronkowski.

In late September, Brady said he planned to play at least one more season, but he indicated several times since then that returning will be a family decision.Brady is the NFL’s all-time leader in many categories, including yards passing (84,520) and TDs (624). He’s the only player to win more than five Super Bowls and was MVP of the game five times.

Brady is the NFL’s all-time leader in many categories, including yards passing (84,520) and TDs (624). He’s the only player to win more than five Super Bowls and was MVP of the game five times.

When Brady walks away, he’ll do so as the NFL’s career leader in numerous passing categories and most prolific winner. He’d also be going out at the top of his game. The 44-year-old Brady goes out after leading the Tampa Bay Buccaneers to a Super Bowl title last season and NFC South championship this season.

An unusual encounter with Tom Brady

It's not every day that someone breaks into your house.  It is even weirder when that intruder is NFL legend and future hall-of-famer Tom Brady.

Read the full text of Tom Brady's farewell message to fans below:

I have always believed the sport of football is an "all-in" proposition -- if a 100% competitive commitment isn't there, you won't succeed, and success is what I love so much about our game. There is a physical, mental, and emotional challenge EVERY single day that has allowed me to maximize my highest potential. And I have tried my very best these past 22 years. There are no shortcuts to success on the field or in life.

This is difficult for me to write, but here it goes: I'm not going to make that competitive commitment anymore. I have loved my NFL career, and now it is time to focus my time and energy on other things that require my attention.

I’ve done a lot of reflecting the past week and have asked myself difficult questions. And I am so proud of what we have achieved. My teammates, coaches, fellow competitors, and fans deserve 100% of me, but right now, it’s best I leave the field of play to the next generation of dedicated and committed athletes.

To my Bucs teammates the past two years, I love you guys, and I have loved going to battle with you. You have dug so deep to challenge yourself, and it inspired me to wake up every day and give you my best. I am always here for you guys and want to see you continue to push yourselves to be your best. I couldn't be happier with what we accomplished together.

To all the Bucs fans, thank you. I didn't know what to expect when I arrived here, but your support and embrace have enriched my life and that of my family. I have been honored to play for such a passionate and fun fan base. What a Krewe!!!

To the city of Tampa and the entire Tampa-St. Petersburg region, thank you. It has been wonderful to be a resident of such a fun place to live. I want to be invited to our next boat parade!

To the Glazer family, thank you for taking a chance on me and supporting me. I know I was demanding at times, but you provided everything we needed to win, and your ownership was everything a player could ask for.

To Jason Licht, thank you for your daily support and friendship - I will never forget it. I had never been through free agency, and I had some trepidation about how we could achieve success. Your leadership gave me confidence, and I will always be grateful.

To my head coach Bruce Arians, thanks for putting up with me! Your firm leadership and guidance were ideal. There is no way we could have had success without your experience, intuition, and wisdom. I am very grateful.

To all the Bucs coaches, my sincere thanks for all the hard work, dedication, and discipline that goes into creating a winning team. I have learned so much from all of you and will value the relationship we have.

To every single Bucs staffer and employee, thank you. Each of you is critically important, and I was greeted with a smile every day. That means so much to me. Your work is made up of long hours and hard tasks, but please know I see each and every one of you. Thank you so much.

To Alex Guerrero, thank you. I could never have made every Sunday without you; it's that simple. Your dedication to your craft and our friendship and brotherhood are immeasurable. We have an unbreakable bond, and I love you.

To Don Yee and Steve Dubin, thank you. You've been with me every step of the way since I left the University of Michigan and before I entered the league. What a journey it's been, and I couldn't do it without you.

To my parents and entire family (and extended family of countless friends), I love you and thank you for your never-ending support and love. I could never have imagined the time and energy you have given me for me the past 30 years in football. I can never repay you. And just know I love you so much.

And lastly to my wife, Gisele, and my children Jack, Benny and Vivi. You are my inspiration. Our family is my greatest achievement. I always came off the field and home to the most loving and supportive wife who has done EVERYTHING for our family to allow me to focus on my career. Her selflessness allowed me to reach new heights professionally, and I am beyond words what you mean to me and our family. Te amo amor da minha vida.

My playing career has been such a thrilling ride, and far beyond my imagination, and full of ups and downs. When you're in it every day, you really don't think about any kind of ending. As I sit here now, however, I think of all the great players and coaches I was privileged to play with and against the competition was fierce and deep, JUST HOW WE LIKE IT. But the friendships and relationships are just as fierce and deep. I will remember and cherish these memories and re-visit them often. I feel like the luckiest person in the world.

The future is exciting. I'm fortunate to have cofounded incredible companies like @autograph.io @bradybrand @tb12sports that I am excited to continue to help build and grow, but exactly what my days will look like will be a work-in-progress. As I said earlier, I am going to take it day by day. I know for sure I want to spend a lot of time giving to others and trying to enrich other people's lives, just as so many have done for me.

With much love, appreciation, and gratitude,
Tom.