TOKYO (AP) - An American finished atop the podium in the women's Olympic gymnastics all-around, just like always.

Sunisa Lee became the fifth straight American woman to claim the Olympic title on Thursday, edging Rebeca Andrade of Brazil in an entertaining and hotly contested final while defending champion Simone Biles watched from the stands.

Lee's total of 57.433 points was just enough to top Andrade, who earned the first gymnastics all-around medal by a Latin American athlete but missed out on gold when she stepped out of bounds twice during her floor routine. Russian gymnast Angelina Melnikova earned bronze two days after leading ROC to gold in the team final.

RELATED: Tokyo Olympics: Who to watch on Team USA

Lee and the Americans earned a silver in that event, one in which Biles withdrew after one rotation when she decided she was not mentally prepared to compete.

Biles opted to pull out of the all-around final, too, leading to the jarring sight of the gymnast considered the greatest of all-time watching the biggest meet in five years from the stands alongside teammates Grace McCallum, Jordan Chiles and MyKayla Skinner.

The 24-year-old Biles' absence created an opportunity the 24 women who took the floor at the Ariake Gymnastics Centre probably didn't think possible when they landed in Tokyo earlier this month: a legitimate shot at the top of the podium. Biles had captured every major international competition since 2013 except the 2017 world championships, which came during the year she took off after her triumph in Rio de Janeiro five years ago.

Yet if Lee, Andrade and the rest of the contenders were nervous, it hardly showed. Andrade's near-perfect Cheng vault gave her an early lead, but Lee used her spectacular uneven bars set — the hardest one currently being done in competition — to pull closer.

Lee, an 18-year-old Hmong-American from Minnesota, gutted her way through a nervy beam routine. She nearly came off while executing a wolf turn — basically a seated spin — and basically needed to suction cup her toes to the 4-inch slab of wood to stay on. Her score of 13.833 moved her in front of Andrade heading into the floor exercise.

Going first, Lee opted for a routine with three tumbling passes instead of four, hoping better execution would override any potential tenths she gave up by not doing a fourth pass. Her 13.700 was steady, but it left an opening for Andrade. 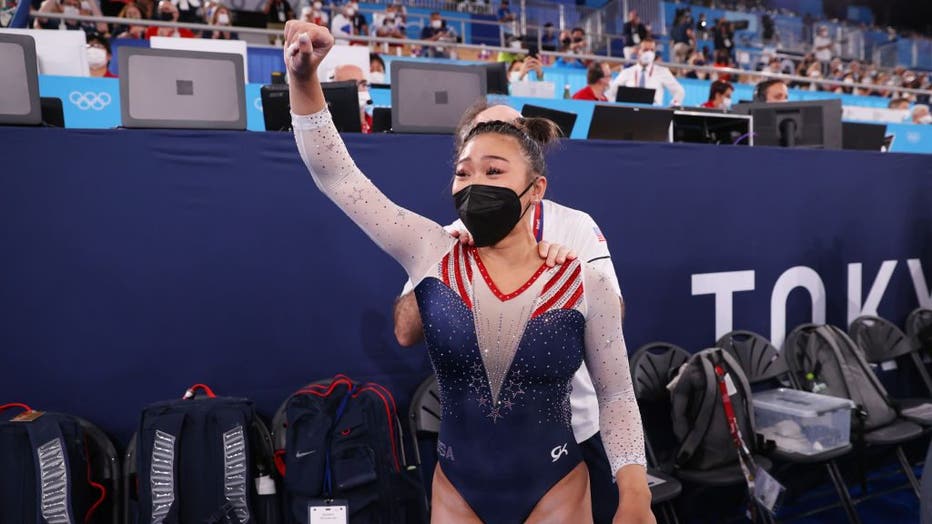 Sunisa Lee of Team United States reacts during the Women's All-Around Final on Day 6 of the Tokyo 2020 Olympic Games at Ariake Gymnastics Centre on July 29, 2021 in Tokyo, Japan. (Photo by Jamie Squire/Getty Images)

The 21-year-old Brazilian, two years removed from a third surgery to repair a torn ACL in her knee, had the best floor score of the contenders during qualifying. Yet she bounded out of bounds with both feet at the end of her first tumbling pass. And her right foot stepped off the white mat and onto the surrounding blue carpet.

Needing a 13.802 to win, she received a 13.666 instead, extending the U.S. dominance in one of the marquee events at the Olympics. The Americans have won each of the Olympic finals since Carly Patterson triumphed at the 2004 Athens Games.

Biles was heavily favored to extend that streak before opting out. Lee, who dealt with ankle injuries so painful she was limping at times during the U.S. championships last month, stepped into the void. She actually beat Biles during the second night of the Olympic Trials at the end of June.

A month later, she found herself standing atop the podium as one of the new faces of a sport that is becoming increasingly diverse in the U.S. She is the third straight woman of color to grab Olympic gold for the Americans, joining Biles in 2016 and Gabby Douglas in 2012.

Jade Carey, who replaced Biles in the finals for the U.S. team, finished ninth.